Before starting, it was already clear that in the budget debate in the Bundestag there was going to be a lot of talk about sending or not sending weapons to Ukraine and about the contrast between the German government's declarations on support for kyiv and the concrete facts, still in a state of paralysis. 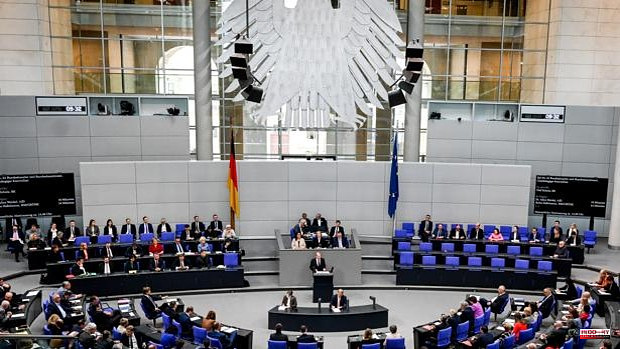 Before starting, it was already clear that in the budget debate in the Bundestag there was going to be a lot of talk about sending or not sending weapons to Ukraine and about the contrast between the German government's declarations on support for kyiv and the concrete facts, still in a state of paralysis. In an attempt to retain the initiative in the debate, Chancellor Scholz has in his first speech uprooted a new agreement, this time with Greece, whereby Athens will send Soviet-era military vehicles to Ukraine in exchange for more modern equipment than you will receive from Berlin.

“We will provide German armored personnel carriers,” the German chancellor has advanced. It is an agreement similar to those that Germany had previously reached with the Czech Republic and Poland.

Germany will deliver 14 Leopard main battle tanks and an armored vehicle to the Czech Republic in exchange for the delivery of T-72 tanks to kyiv, but the deliveries are still undated. These rinses allow Germany to maintain its discourse of support for Ukraine, in line with the rest of the West, but without carrying out effective shipments of weapons that Putin may consider enemy movements, a strategy that does not go unnoticed by the opposition.

“What are you hiding from us, Mr. Scholz?”, the leader of the conservative CDU, Friedrich Merz, asked him in the parliamentary debate, who has reproached him for not having once uttered the phrase “Ukraine must win this war” and not having sent a single weapon after having obtained the historic permission of the Bundestag, on April 28, to which Scholz has responded with more announcements.

"In the coming weeks, we will supply Ukraine, in close coordination with the Netherlands, with 12 of the most modern howitzers in the world," he said, "and the federal government has also recently decided that with the IRIS-T system we will deliver the defense system most modern anti-aircraft gun that Germany has at its disposal. In this way, we are allowing Ukraine to protect an entire city from Russian air strikes." Germany will also supply Ukraine, according to the chancellor, with a state-of-the-art tracking radar that recognizes enemy howitzers, mortars and rocket artillery.

The announcements, however, continue to provide no clarity on the status of shipments. "If everyone behaved like the Federal Republic of Germany, the Russian army would have taken kyiv long ago," he added. “In Europe there is only disappointment and resentment over the lack of clarity in Germany,” insisted Merz, who however highlighted the agreement with the opposition to inject 100,000 million euros in supplies and equipment into the German army as very positive.

When he speaks of "disappointment and resentment", Merz is referring to the criticism of the Polish Deputy Foreign Minister, Szymon Szynkowski, who has protested the telephone calls between Schoz and Macron with Russian President Putin and has lamented that the lack of agility in German arms shipments. "We consider them absolutely useless," he said on a German television program, in which he reproached Scholz for "instead of traveling to kyiv, he calls the Kremlin quite regularly." "The talks with Putin," in which the Russian president insists that offensive arms shipments to Ukraine will have consequences, "only serve to give Putin credibility," according to Szynkowski. Regarding arms shipments to Ukraine, "Germany must finally do more", he insisted, "nothing promised by Germany has been fulfilled so far".

The fact is that the senior cadres of the German Administration have been giving the most varied excuses for weeks to justify the delays. From Defense it was explained first that at least part of the weapons had to be manufactured, so as not to leave Germany without supplies, and later that they could not find ammunition. The Secretary of State for Defense, Siemtje Möller, has rejected the accusation of non-compliance in the delivery of weapons with the words "NATO does not deliver any model of Western tank" in an interview with Theo Koll, on ZDF. During a recent visit to Senegal, Scholz explained that, together with many others, he is doing everything possible "so that Ukraine can defend itself from a war of aggression, but at the same time a situation arises in which there is a halt to the fire and Russia and an agreement can be concluded between Ukraine and Russia». “The problem is in the Foreign Ministry”, identifies the Ukrainian Foreign Minister Kuleba, in constant communication with the three partners of the “traffic light coalition”.

1 Biden offers to supply Ukraine longer-range missiles 2 Pope urges lifting of Ukraine block to allow wheat... 3 Rwanda declares that it will not stand by if Congo... 4 Israel claims that a laser missile shield will cost... 5 S&P, Dow futures rise ahead of economic data;... 6 Yellen claims she was wrong about the inflation path.... 7 Explainer: Is it illegal to possess guns in Canada?... 8 Sagunt a Escena 2022: daily schedule of all performances... 9 The Masymas supermarket chain expands its online sales... 10 The streets of Soria will once again have a bull run...