Pope Francis on Wednesday expressed his "shame" at the French Roman Catholic Church's child sexual abuse and acknowledged that he had failed to put the needs of the victims first. During his regular audience at Vatican, the pope spoke about a Tuesday report that showed 330,000 French children were abused by clergy and church officials dating back to 1950.

"There are unfortunately many. Francis stated that he wanted to express his sadness and pain to the victims for the trauma they had suffered. "It is also our shame, my shame and my shame that the church has not been able to place them at the centre of its concerns for too long."

He urged all religious leaders and bishops to take the necessary actions "so that similar dramas do not repeat."

In addition, the pope expressed his "closeness" and "paternal support” to French priests despite a "difficult task," and asked French Catholics "ensure the church remains safe for all".

On Wednesday, the French President Emmanuel Macron sent his "thoughts” to the victims. He said that "behind the figures, terrible situations, and described, there is broken lives," he stated, speaking at the Slovenian sidelines of an EU meeting.

Macron stated that there is an urgent need for truth and compensation, and added that more work must be done to implement the recommendations of the report and better protect children.

France was the first to report the phenomenon. The report stated that an estimated 3,000 priests were involved in sexual abuse of children by the Catholic Church. Like other countries, the French church has had to confront shameful secrets that it long kept secret.

Jean-Marc Sauve, the president of the independent commission which issued the findings, stressed Tuesday that Catholic authorities had "systematically covered up" the abuses that spanned 70 years.

Victims welcomed the document of 2,500 pages as a long-overdue and the head French Catholic bishops' conference asked them for forgiveness.

According to the report, the 330,000 victims include 216,000 people who were abused by priests or other clerics. The rest were victims of church leaders such as Scout leaders or camp counselors. These estimates are based on an extensive research done by France's National Institute of Health and Medical Research regarding the sexual abuse of children in France.

The commission called for strong action from the church, decrying its "faults and silence" and asking the Catholic Church to compensate victims in cases that are too old for French courts.

Matteo Bruni, a Vatican spokesperson, said Tuesday that Pope Francis had learned of the report's findings with "sorrow."

Bruni stated, "His thoughts are in first place for the victims with a profound sorrow for their wounds but gratitude for their courage and willingness to speak out,"

In May 2019, Francis issued a landmark church law that requires all Catholic priests, nuns and bishops to report clergy sexual abuse and cover-ups of their superiors to the church authorities. In June, he stated that all bishops must be held responsible for the "catastrophe” of the sex-abuse crisis. 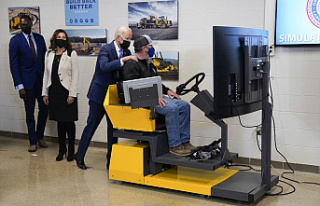 Dems are moving towards a more moderate spending plan...