For nearly 30 years, the descendant of a German colonial officials tried to be German. Now he is on a hunger strike. Since Wednesday for his right to be in th 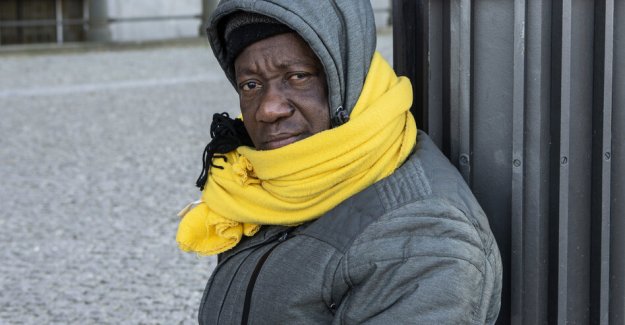 For nearly 30 years, the descendant of a German colonial officials tried to be German. Now he is on a hunger strike.

Since Wednesday for his right to be in the hunger strike: Gerson Liebl in front of the Red town hall photo: Christian Thiel

BERLIN taz | Cold the Wind blows around the Red town hall. Passers-by rushing by just a few note the shapeless bundle of Blankets and bags, which is diagonally in front of the main entrance, and almost like the night camp of a homeless person acts. If not, the sign on the lantern above it would be: "hunger strike!" it proclaims.

The man who is here on Thursday morning, is desperate and exhausted. Because he has a headache and an empty stomach after 24 hours without solid food. But especially because he has been conducting for 28 years, a seemingly hopeless battle against German authorities. Gerson Liebl from Togo want to be German and here may live. His grandfather was a German officer in the colony of Togo, his son is German, his wife has a permanent residence permit. There shall he no right to be here have? "This is pure harassment," whispers Liebl almost inaudible under his thick scarf. And: "I'll lie here until I have my passport."

That Liebl has the right to believe in many: There have been several petitions for him, currently in the Committee on petitions of the chamber of deputies (AGH) is up and running again. The goldsmith, who came in 1991 to Germany, has also got a right to stay, 2003, in Rhineland-Palatinate. Later, it became known to him again but, in 2009, he was deported to Togo, after 18 years in Germany. Although he has here in Berlin, a son, born in 1999, Georgi, and a wife, Ginette, also from Togo. It films about him and a countless number of articles written. Because his case is a good example for a Chapter of German history that is almost forgotten, but, nevertheless, until today, injustices produced.

His grandfather, Frederick Liebl, a doctor from Straubing, was not the only colonial official in a Local fell in love. Of these, the so-called "mulatto lists", which were conducted in Togo in the colonial era, since 1905 witnesses. The administration fathers have led Jestbet to alimony, wrote the historian Peter Sebald, who helped Liebl in Togo, to prove his lineage.

is Actually in the lists, a "government physician, Dr. Liebl" recorded, the words "pays for parent/child 1,000 Mark for their support and education"; the taz was able to view the documents in the Federal archives. However, because so-called "mixed marriages" were forbidden in the colonial era of racist reasons, and because, until 1963, only legitimate children of German fathers were by birth a German, was Gerson Liebls rejected in 1992 for the first time, request for naturalisation.

Without this "inhuman racist ideology and practice, Gerson Liebl could get the German citizenship," writes, therefore, the cultural sociologist Wolfgang Lenk, a green member of the BVV Friedrichshain-Kreuzberg, in his Petition to the AGH. It is, therefore, not only an individual fate, but rather that "the Federal Republic of Germany, the nationality of legal injustice repealed, as the legal successor of the German Empire, nor sufficient provisions has created, to today late this injustice will follow, to exclude".

the foreigners ' authority of Berlin insisted today that Liebl is Togolese. The Togolese authorities have, however, already in 2004, clear that both Liebls – Gerson and Ginette – get no Togolese papers, "because the Affected are descendants of a grandfather with German nationality," as it is called by the local Ministry of justice. Both Liebls de facto stateless are.

in the Meantime, the local authorities had recognized that even in 2017, as Liebl, at the time, in Togo, a visa by the German Embassy in Lomé got to come for a family reunion, back to Germany. His son was now become a German and so he had the right to return, wrote to the interior administration. He got from the German Embassy a "travel document for foreigners", which is regarded as a passport for stateless persons. Only limited to 24 was. December 2017 – the day the Liebls son 18.

The Pass is Liebls treasure to be proof that the Germans have acknowledged that he is not a Togolese. The immigration authority sees it differently: Since Liebls return in December 2017, you refuses to renew the passport, not even a right of residence, he is supposed to have. He could not Finance Yes – what is difficult because he gets from the authority, no work permit.

"our family is destroyed," says Ginette Liebl. bonus veren bahis siteleri She came in front of the town hall to see to her husband. "I'm the only one who is allowed to work," she says. "Gerson has been sitting for almost two years at home, is always sad." She has fear for his health due to the hunger strike. "If something happens to him, the authorities have blood on their hands!", the petite woman says. Then you have to go to the immigration office.

Because the police officers at the town hall have cashed Liebls the past "travel document" on it in writing and asked to register at the foreigners authority. Whether this is good or bad? Ginette wants to ask. Gerson feels too weak. In addition, the hunger strike must continue. "God sees everything," says Liebl, and smiles. And disappears into his sleeping bag.