Sagunt a Escena 2022: daily schedule of all performances and shows

Culture of the Generalitat, through the Institut Valencià de Cultura, has presented the programming of the 39th edition of the Sagunt a Escena festival, which will take place from 4 to 28 August at the Teatro Romano and different spaces in the city of Sagunto . 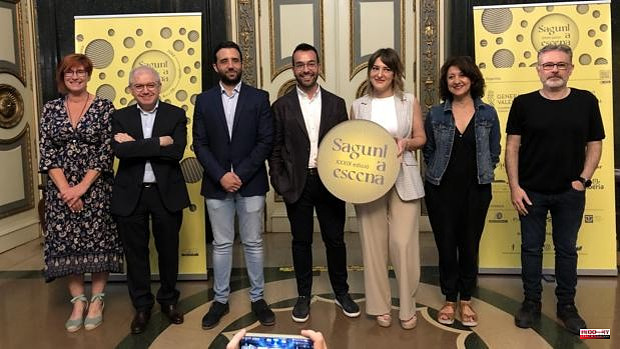 Culture of the Generalitat, through the Institut Valencià de Cultura, has presented the programming of the 39th edition of the Sagunt a Escena festival, which will take place from 4 to 28 August at the Teatro Romano and different spaces in the city of Sagunto .

The presentation of the theater, music, dance and circus programming has been attended by the Autonomous Secretary of Culture and Sport, Ximo López Camps; the artistic director of the festival, Inma Exposito; the mayor of Sagunto, Dario Moreno; and Marylène Albentosa, of the Deputation of Valencia.

The regional secretary of Culture, Ximo López, has pointed out that "we present a very complete program in advance and this Wednesday we will already have the tickets on sale so that the public can organize themselves well and plan stays in Sagunto on the occasion of the festival, which is also very positive for the city.

«Inma Expósito and the festival team delve into the line that we began seven years ago to relocate Sagunt a Escena in its rightful place. And in this edition we have worked hard on several aspects: we can see the greater contact, coordination and joining forces with other festivals, so that very powerful international and state productions can become a reality so that we can all include them in our programming and they can to turn. I am talking about the confluences with festivals such as Mérida, Grec or San Javier”, López continued.

«This edition demonstrates the work we are doing to promote parity among artistic teams. In this edition we have almost 50% of women and men; without ever neglecting the fact of combining international and state shows with Valencian productions, in order to continue giving a good boost to our sector: of the 22 shows on the program, 14 correspond to Valencian proposals », he commented.

The regional secretary for Culture has also explained that "the Generalitat's Culture involvement is absolute and this year we have a global budget for the Institut Valencià de Cultura, together with the institutions that accompany us and the sponsors, amounting to 637,000 euros . An increase of approximately 38%, only if we compare with the budget of the edition that we organized at the beginning of this second botanical legislature, that of 2019 ».

For her part, Inma Expósito, artistic director of the festival, stated: «One more year, the Sagunt a Escena festival invites us to experience summer nights with the best possible company: theatre, dance, music, heritage artist and the public that attends. We have opted for a heterogeneous and multidisciplinary program, a polyhedral journey hand in hand with the classics, the Greeks and the contemporaries, however, in addition, the festival, over the course of a month, overflows and takes over the squares, the streets and the parks of this ancient city, breaking away from everyday life and placing the representation of the live word and the beauty of the scenic language at the center of attention».

Eight shows with nine performances will be presented at the Roman Theater. The opening of the festival at the Roman Theater will be on August 6, with 'Júlia', the play by the Alcoy company La Dependent on the text by Isabel-Clara Simó, adapted and directed by Gemma Miralles.

On August 11, the Cuban company Acosta Danza will bring the show 'Tocororo Suite' to the Romano, with choreography by Carlos Acosta and music by Miguel Núñez.

One of the highlights of this edition of the festival will arrive on August 13 and 14 with José Mercé and the tour of his album 'El Oripandó', the result of long and intense conceptualization, composition and production work with Antonio Orozco.

On August 18, the Roman Theater will host the classical theater of Lazona, with the play 'El misántropo', by Menandre, directed by Carol López and with Beatriz Carvajal, Jesús Castejón and Àngel Ruiz as performers. Both this play and 'Safo', a production by the Teatre Romea, the Mérida Classical Theater Festival and the Barcelona Grec Festival, are two productions that can be seen for the first time in our territory at Sagunt a Escena. 'Safo' will arrive in Sagunto on August 20, a musical theater proposal that rereads the myth with Christina Rosenvinge, María Folguera and Marta Pazos.

The music will be performed by French countertenor Philippe Jaroussky and guitarist Thibaut Garcia on August 21 with the show ‘À sa guitare’.

On August 24, the irreverence of Miss Beige will take the participatory performance 'Secretos de Alcoba' to the Teatro Romano, with Ana Esmith as creator and performer.

Finally, the Roman Theater program for this edition will conclude on August 27 with the musical theater 'Ladies Football Club', by Barco Pirata, directed by Sergio Peris-Mencheta. Eleven actresses will give voice to one of the lesser-known stories of sport, the creation and prohibition of the first women's football teams in Europe.

With regard to the Off Romà shows, we find a very varied program for all audiences, with free access. This year the performances of the Off Romà will be in the Glorieta, the ascent to the castle, the Civic Center and the Casa dels Berenguer.

On August 4, the festival will open with the circus La Finestra Nou Circ, with the show 'Tramvia núm. 12’, which will take place in the Glorieta. Next, also at the Glorieta, it will be the turn of the Valencian group Tito Pontet, who will present their new album.

On August 5, the company La Mecànica

On August 10, the Casa dels Berenguer will host the 'Preludi a la lenttitud', by Versonautas, a proposal of scenic music and poetry in Valencian. On August 12, on the way up to the castle, the circus will come from the hand of Mireia Miracle Company and its show '

On August 14 at the Glorieta, the Marroch company will offer the dance show 'Perseverance', with choreography by Salvador Rocher, and on the 17th it will be the turn of the vertical dance and shadow play of 'Nada', by Ferrer

The circus show ‘Trenzadas’, by 23 Arts Produccions, will be at the Glorieta on August 19, directed by Jordi Fàbregas. The Civic Center will receive on August 21 the play in Valencian ‘Plàstic’, by the company La Família Política.

Finally, the Glorieta will host the last two shows of the Off Romà, which will close the festival, on August 28: the Spinish Circo circus, with 'Peus dalt', and the theater with the play 'Aquiles', by La Fam Theater.

The poster for this edition of Sagunt a Escena has been carried out by the designer Eusebio López. Tickets will be on sale on the website taquilla.ivc.gva.es and at the festival box offices from June 1. Tickets for the Roman Theater range from ten to 24 euros, depending on the areas and shows, with a free show, 'Miss Beige'. All the Off Romà shows are free.

1 The Masymas supermarket chain expands its online sales... 2 The streets of Soria will once again have a bull run... 3 Sánchez makes a triumphant balance of his four years... 4 Toledo premieres this year two giants with the figures... 5 The United States will continue to persecute ETA members... 6 Perelló Tomato Fair 2022: dates, times and full program... 7 The Agriculture Casino of Valencia hosts the exhibition... 8 Vázquez is confident that the average delay for an... 9 San Martin de Valvení (Valladolid) offers canoeing... 10 Primavera Sound 2022: This is the special public transport... 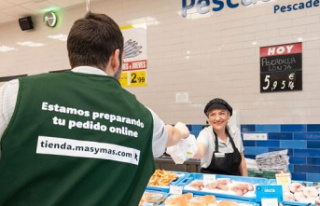