European nuclear fusion engineers are working on a European power plant that will be able to replicate the sun's work to provide an unlimited, clean source of energy for Earth.

European nuclear fusion engineers are working on a European power plant that will be able to replicate the sun's work to provide an unlimited, clean source of energy for Earth.

Today marks the start of a five year "conceptual design phase" to clarify key technology decisions for DEMOnstration power plants (DEMO), which is backed by EuroFusion, a European consortium. This project will take fusion power from a concept stage to a commercial reality. The 300-500 megawatt reactor will be producing low-carbon energy by 2054, according to the group.

Experiments in nuclear fusion have been extensive, largely using machines called tokamaks. These machines use powerful magnets to confine hot matter (or plasma) and control it. They are usually shaped like a doughnut. Plasma is usually made from deuterium or tritium, which are two hydrogen isotopes.

Research has been largely focused on improving the properties of magnets and materials in tokamak walls, as well as better modeling how plasma experiments will work out. The ultimate goal is to get more energy from fusion reactions than what goes in.

Although the major milestone of "net gains" is not yet achieved, there has been some progress. Last year's global energy record set a new standard. An experimental research tokamak worth EUR18 billion in southern France, known by ITER, could bring more progress. It should be completed by 2025, and fully operational by 2035.

The DEMO power station must control and maintain plasma for a longer period of time than the experiments have shown. DEMO will need to capture the heat from the reaction, and convert it into electricity. This is all while operating 24 hours per day. "It's hard. It's hard. But that's why it's important. That's precisely the point." Ambrogio Fasoli is chair of EuroFusion General Assembly. This decision-making body, funded by the EU member states as well as Switzerland, says Ambrogio Fasoli.

Tritium production is one of the problems. Because it is a fast-degrading isotope, supplies are scarce and costly. While research projects have used grams of the material so far, a power plant will require kilograms. This will lead to design decisions about how to make more tritium, allowing neutrons from plasma to interact with lithium in the walls of the tokamak.

There are two types of tokamaks: an elongated one that creates a dense plasma or a spherical design that confines it in a smaller shape. The materials that will be used in the tokamak walls must also be considered. They will be exposed to the huge amount of neutrons from fusion reactions. The structure absorbs a much higher dose of neutrons than we have ever seen. Fasoli says it's orders of magnitude greater.

He said that DEMO work cannot wait for ITER's completion, and must be done simultaneously. Fasoli says, "[Otherwise] there would be a huge gap of decades and then nobody's interest in fusion anymore." Fasoli says that DEMO should learn from ITER.

It remains to be determined where the power plant will go. Juan Matthews, University of Manchester, UK is betting on Germany because it doesn't have a fusion device. France and the UK won previous competitions to host them.

No matter what DEMO's concept design looks like when it's finished in 2027 the plant will not be the first fusion powerstation. Private fusion start-ups claim they will have one in operation by the 2030s. The UK government, however, claims that its STEP fusion power station will be operational by 2040. China claims it will have one in place by 2035.

1 Hajj is closer to normal: 1,000,000 Muslims start... 2 Gunslinger Effect: Why you might want to shoot second... 3 LHCb leads to the observation a tetraquark 4 Haiti's situation has gotten worse in the year... 5 NATO official: The West Balkans are not under imminent... 6 Meet the Palestinian president and Israeli defense... 7 Germany elects a new head of the anti-discrimination... 8 A new dielectric optical telescope is used to constrain... 9 No gorings at the 1st bull race in Pamplona for 3... 10 Iraq's oil minister calls for an end to Kurdish... 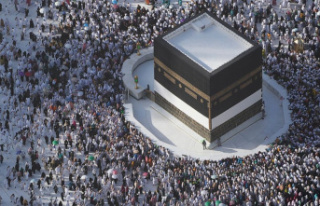