He inherits the old Land Rover Defender: first ride in the Grenadier

Automotive start-ups are currently springing up like mushrooms after the warm rain – in the USA, in China and also in Europe. Almost all of them are united by t Automotive start-ups are currently springing up like mushrooms after the warm rain – in the USA, in China and also in Europe. Almost all of them are united by the fact that they are developing electric vehicles. Sometimes big, sometimes emphatically small, sometimes for loads and sometimes for people, but always with a stately battery on board. Ineos Automotive, on the other hand, is heading in a completely different direction. The automotive branch of the chemical group Ineos, founded in 2016, continues to rely on diesel and gasoline. And he also shears out of the piled-up SUV wave and steers the Grenadier into the middle of difficult terrain: an off-roader from the old strike.

Half a year will pass before the Grenadier will be at the Ineos dealers. There will be around 25 in Germany, supplemented by selected Bosch car services for the service. While the vehicle development is still in its final stages, a handful of journalists were given the opportunity to test the car off–road for the first time - and only there. This alone shows that Ineos does not want to conquer the boulevards, but is pushing into that narrow and impassable gap left by the demise of the old Land Rover Defender, the price explosion of the Mercedes-Benz G-Class and the partial electrification of the Jeep Wrangler. Manufacturer Ineos Grenadier

Because power and torque are also appreciated off-road, Ineos got a supplier on board who understands his job: BMW. The Bavarians supply their three-liter in-line six-cylinder engines once as a gasoline engine with 285 hp and 450 Newton meters of torque and once as a diesel with 249 hp and 550 Nm. The Ineos managers expect a lot from the diesel engine in particular, at least on the European market.

As standard, both BMW engines work together with the established eight–speed automatic transmission from ZF. As expected, this works without any problems, even if a reduction gear has been flanged on the automatic transmission. The switchable reduction is further proof that Ineos is serious about driving through the undergrowth. In fact, the Grenadier prototype takes even steep climbs effortlessly. But when it gets really rough, differential locks play an important role. The Grenadier, like the good old G, will have three of them on board for the front, middle and rear – at least in the final condition. The prototype still managed without front and rear axle locks, which revealed another strength of the Grenadier: the axle entanglement, i.e. the prerequisite for all four wheels to maintain ground contact on discarded ground, is enormous. In the test, the absence of the locks was easily compensated for. Manufacturer Ineos Grenadier

The Ineos Grenadier can also display terrain. Whether you need it or not. In view of the 59,000 Euro base price, which applies equally to diesel and petrol engines, the number of competitors is thus reduced to the Jeep Wrangler in the Rubicon version. However, it is already clear that the American will lose out in practical operation due to its significantly lower payload and weaker towing capacity. Subscribe to the auto newsletter here

Insider reports, tests, guides, videos, background information: Every week FOCUS Online provides you with the most important news from the auto department. Here you can subscribe to the newsletter easily and free of charge.

Ineos also deliberately takes a different path in a completely different point: in the cockpit design. It's more rustic, without sprawling digital displays. Of course, there is an infotainment system, but otherwise buttons and levers dominate the driver's workplace. Even the headliner has to serve for this, which arouses associations with an aircraft pulpit. It is unusual that not all switches are occupied. However, what is usually classified as a shortcoming of a poorly equipped car, the owner of which did not order some of the options offered, follows a special strategy here: the blind switches are already wired and later enable accessory and conversion specialists to integrate their own solutions in the vehicle - a field that plays an important role in the world of heavy–duty off-road vehicles. Ineos calls this philosophy "open source", which can also be recognized externally by the already integrated airline rails for accommodating various accessories. Eco-Jeep shows hybrid madness - Offroad can he still FOCUS Online Eco-Jeep shows hybrid madness - Offroad can he still

Ineos can produce 30,000 cars annually at its plant in Hambach. If the former smart factory is adapted accordingly, there could be twice as many per year. The future will have to show whether this niche actually gives way. In any case, Ineos leaves no stone unturned to broaden the portfolio and thus also cover marginal areas. For example, the basic Grenadier, called the 110, is also available in a more tax-favorable N1 commercial vehicle variant than two- or five-seater. The 130 series with a longer wheelbase, which will be presented next year, is likely to attract wider interest. It is initially available as a pickup with a double cab, which is similar to the Jeep Gladiator. Later the 130 station Wagon will follow. On the other hand, a short, two-door 90s is off the table: this market segment seemed too small even to the offroad-enthusiastic Ineos managers. Tastes hearty or sweet: How to easily bake bread with sourdough Esslust Wurzelbrot: Tastes hearty or sweet: How to easily bake bread with sourdough yourself

1 NFL suspends all COVID protocols and cites "encouraging... 2 The true trick to the NFL trade is to get out of salary... 3 Paralympics: Russians banned by athletes 4 Cameron bids farewell after a year of deliberation 5 Boot risk: Russians and Belarusians leave Paralympics 6 Russian law regarding Ukraine war reporting threatens... 7 India is under increasing pressure to condemn Russia... 8 During the opening ceremony in Beijing, Ukraine's... 9 Airbnb stops operations in Russia, Belarus 10 States are left with huge stocks of vaccines as the... 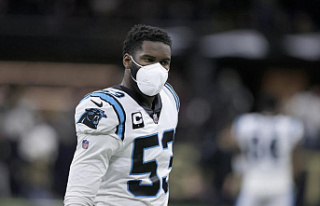