Discussions of the World Wildlife Conference in Panama, scheduled for later this year, will focus on iconic African wildlife like elephants and big cats.

The highest-ranking decision-making body in global wildlife trade is the wildlife body. It will be responsible for deciding on the Lyon resolutions on flagship wildlife, including pangolins and West African vultures, seahorses, turtles, Malagasy Ebonies, sharks, and rays.

Ivonne Higuero (secretary general of UN wildlife agency) stated that African nations have set a strong example for the rest of the world in how countries can work together to combat illegal international wildlife trade. "The illegal trade in endangered wild animals and plants is being tackled by new political engagements in Central and West Africa."

Higuero said that African countries were the ones who set the example for the African Carnivore Initiative. This initiative aims to preserve lions, leopards and wild dogs species in Africa.

Three distinctions are made by the powerful UN wildlife agency for listing wildlife according to their need for protection. It also outlines commercial rules that apply to more than 38,000 species of animals and plants. Member states are required to follow these rules or face severe penalties. Since 2017, all member states are required to report data about any wildlife seizures made during the preceding year. According to UN crime records, nearly 6,000 species were seized between 1999 and 2018. They included mammals, reptiles corals, birds, fish, and fish.

The main tool for analyzing illegal trade trends worldwide is the World Wildlife Seizures Database. It is a database of all reported wildlife seizures compiled by UN office on drug and crime. According to the database, there were more than 180,000 seizures between 1999 and 2018. This includes 6,000 species across 149 countries.

According to poaching and trafficking records, ivory trade experienced a resurgence in 2007 and continued steadily until 2011, before falling in 2016. In 2006, 556,973 elephants were estimated to have been in Africa. Since then, this number has fallen to 413,242.

UN records indicate that Africa is the source of the largest illicitly harvested rosewood flows in the last four years. In 2018, global imports of tropical hardwood logs amounted to 18 million cubic meters, valued at more than US$ 3Billion. This import demand accounted for 82 percent of the total value. The largest furniture manufacturer in the world is China.

Madagascar was the most prominent non-Asian source of rosewood up until 2013. At least 48 species were known to be found there, with 47 of these being common on the Indian Ocean island nation. In 2016, a recommendation was made to stop trade in Madagascar rosewood species. This recommendation is still in effect today.

Raphael Edou is the Africa program manager for the environmental group. He stated that the rosewood crisis had been destroying West African forests as well as the livelihoods of their people for nearly a decade.

The International Union for the Conservation of Nature (IUCN) declared redwood "endangered" in 2018. China, Vietnam and the United Arab Emirates remained the most important destinations for trafficked rosewood. They account for three-quarters of all global logs seized.

Pangolins are being increasingly hunted in Africa for their meat and scales. Pangolin exports are dominated by Nigeria, Guinea, Liberia Cameroon Central African Republic, Congo, Gabon and Cameroon. The wildlife database shows that Uganda, Burundi, Burundi, the Democratic Republic of Congo and Congo-Brazzaville serve as hubs and logistic nodes for pangolins' transshipment to Africa. China is the largest importer. The wildlife body instituted a ban on global trade in 2016 because of overexploitation.

Officials at the Panama conference will make decisions about the future of Africa's most iconic species and curb illegal trade, as well as the Lyon standing committee's findings.

1 P&O Ferries' mass firing of UK crew members... 2 Turkey creates a massive bridge connecting Europe... 3 As Duke closes the Spartans, Coach K continues his... 4 After a 71-61 victory over Ohio State, Villanova is... 5 Red Sox sign Rockies' SS Trevor Story to play... 6 Video of cop kneeling at Wisconsin student's... 7 US push for hypersonic weaponry is backed by Ukraine... 8 Black girls are first, but not the last: They see... 9 Students shaken by Ukraine are soothed and rallied... 10 Ukraine is now considered a war against attrition... 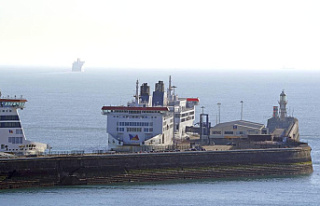