After a three-and-a half hour journey from the International Space Station, a Soyuz space capsule carrying two Russian filmmakers and a cosmonaut has successfully landed. 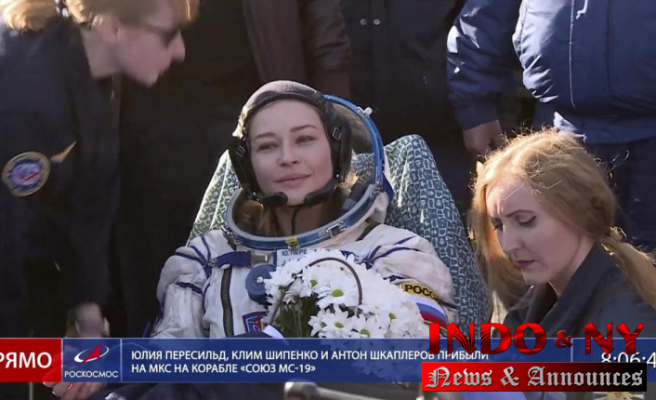 After entering Earth's atmosphere, the capsule fell under a red-and white-striped parachute and landed upright on the steppes in Kazakhstan. Oleg Novitskiy and Yulia Pesild were with it. Klim Shipenko was also present.

Peresild, actress and Shipenko were both on the ground at the space station Oct. 5, for a 12-day shoot. They were there to film segments of "Challenge," which sees Peresild play a surgeon who rushes to rescue a crew member in orbit. Novitskiy spent six months on the space station and will star in the movie as the ailing astronaut.

Ground crews removed the space flyers from their capsule and set them up in nearby seats as they adjusted to gravity. The three space flyers were then taken to a tent for medical examination.

All seemed happy and healthy. Peresild smiled as she held a large bouquet full of white flowers while journalists gathered around her. She also said that she felt a little melancholy.

"I feel a little sad today. Peresild stated on state television that although it seemed like 12 days was a lot, he didn't want to leave after everything was done.

Transfer to the medical tent took about 10 minutes. Crews filming several takes of Novitskiy and Peresild in their seats, which will be included in the movie, delayed the transfer. The film's release date is unknown and more scenes are still being shot on Earth.

1 What is the 'Squid Game' cookie craze? The... 2 Israeli campaign could enter a new phase with shooting... 3 US Religious group claims 17 missionaries have been... 4 Texas GOP proposes new maps to tighten grip on slipping... 5 Gambian Toufah Jaallow tells the story of how she... 6 Studio strikes back with a deal between TV crews and... 7 Father of suspect in the UK lawmaker's assassination... 8 Robert Durst was admitted to hospital with COVID-19.... 9 Russia has the highest daily number of new COVID cases 10 18 people are killed in South India by heavy rains...