Around dawn on Friday, a fiery explosion rattled a Russian fuel depot close to the border. Moscow claimed that Ukraine attacked the facility but Kyiv denied any involvement. The incident was not confirmed by an independent source. 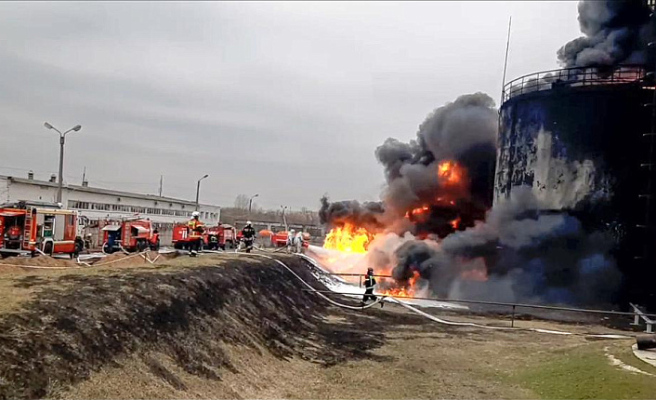 He stated that the facility supplies petroleum only to civilian transport. The Russian armed forces are not involved in the oil base.

Regional Gov. Vyacheslav Gladkov stated that two workers were hurt at the depot. Russian media quoted Rosneft's statement, which denied that anyone had been hurt.

According to the Belgorod mayor's office, more than 300 firefighters battled the fire using a helicopter as well as a special train. Gladkov stated that he met residents who had been moved from their homes to a nearby sporting facility. Gladkov also posted photos of metal fragments and craters in rural areas where he claimed that explosions had caused damage to a power line, and broken windows.

Although it would not be the first incident of attack inside Russia since February 24, war, there have been none as dramatic.

He said that they had done it for some reason but this is not reality."

Oleksiy Arastovich, the presidential advisor, stated earlier that: "We are conducting defensive operations on our territory. All that occurs on Russian territory is the responsibility of Russian authorities.

He said that Russian authorities must "figure out what's happening in Belgorod." "Maybe someone smoked at the wrong place. Perhaps there was another reason. Perhaps Russian troops are deliberately sabotage orders and don't want the Ukrainian military to invade their territory using all available means."

The Kremlin's response to the explosion was muted. Dmitry Peskov, a spokesperson for the Kremlin, said that it was not beneficial to talks with Ukraine.

Some Russian social media users were surprised that Ukraine was capable of mounting an attack on Russia or getting around Russian air defenses. Russian Defense Ministry's daily video briefings often emphasize the number of Ukrainian helicopters and planes that were shot down or destroyed.

Belgorod lies approximately 25 km (16 miles) away from the border. It is also roughly opposite Kharkiv which is Ukraine's second largest city and has been under Russian bombardment ever since the beginning of the war.

Although earlier incidents in Belgorod had raised alarm locally, they had little impact on the wider context of Russia's war. Russia describes it as a "special army operation" that has little effect on ordinary citizens.

Three people were injured by shelling in Belgorod on the first day. However, there was no independent confirmation. According to Russia's state Investigative committee, two adults and one child were hurt in the shelling of Belgorod. An attempted murder investigation was also launched.

A report that two Ukrainian missiles had been launched from an Uragan rocket and landed in a rural region of Ukraine prompted another criminal investigation to be opened by the committee on March 1. This report was also not independently verified.

Gladkov stated last week that a Ukrainian shell had exploded in Belgorod's village, killing a military chaplain. According to reports, houses were damaged in a similar incident. These reports were not confirmed by an independent source.

Another explosion occurred March 29, according to Gladkov. He claimed he heard of a fire at a Krasny Oktyabr munitions store and cited "unverified data." Gladkov stated that he was waiting for official comments from the Defense Ministry. However, none were forthcoming and the cause of fire remained unclear.

1 Pope issues historic Indigenous apology for Canada's... 2 Russia: Russia pushes to pay gas in rubles, not disrupting... 3 The UK is suffering from high energy prices. It is... 4 7 Engineering and Technological Advances From All... 5 Could The Future Of Web3 Have Local Communities Determining... 6 Reasons to Bet on Horses at a Casino 7 As Reddick and Briscoe crash, Kyle Busch wins Bristol... 8 Celtics win 115-114 thanks to Tatum's layup at... 9 "Classic Chris," a stellar down stretch,... 10 Congress seeks to compromise in order to increase...