LAS VEGAS -- A huge, drought-starved reservoir at the Colorado River has been so low that Las Vegas is now pumping water from Lake Mead deeper than other states downstream.

Bronson Mack, a water authority spokesperson, said that while this highlights the severity of the drought conditions it also means that we have been preparing for it for over ten years. He said that the low intake allows Las Vegas to "keep access to its primary water supply in Lake Mead even if water levels continue declining due to ongoing droughts and climate change conditions."

As the drought continues, water managers across several states that depend on the Colorado River are taking new steps to conserve water.

"We don’t have enough water supplies to meet the normal demand right now." Rebecca Kimitch, spokesperson for Metropolitan Water District of Southern California, stated this week that the water supply is inadequate. The agency advised 6 million residents in Los Angeles, Ventura, and San Bernardino counties that they would reduce their outdoor watering to just one day per week by June 1 or face stiff penalties.

In March, Lake Powell's surface level dropped below a crucial threshold, raising questions about Glen Canyon Dam's ability to continue providing power for its 5 million customers in the U.S. West.

Lake Powell and Lake Mead upstream are the largest man-made reservoirs in America. They are part of a system that supplies water to over 40 million people, tribes and industries in Arizona, California and Colorado.

The new pumps at Lake Mead are fed by an intake that was drilled closer to the bottom of Lake Mead. It was completed in 2020 to allow for the continued drawing of water for Las Vegas, its suburbs, 2.4 million residents, and 40 million tourists annually.

The "third straw" draws water at 895 feet (2272.8 meters) above the sea level -- below the point at which water wouldn't be released downstream of Hoover Dam.

The combined cost of the pump and pipeline projects was more than $1.3B. The drilling began in 2014 amid predictions that the lake level would continue falling due to drought. Long-term climate change is now responsible for the increasing drought conditions in the region.

"Without the third intake Southern Nevada would be closing its doors," stated Pat Mulroy, a former chief of the Las Vegas-based water authority and now a consultant. It's obvious that the first straw has run out of water.

According to the authority, Las Vegas' water supply is not at risk. It cites water conservation efforts, which it claims have reduced regional consumption of Colorado River water water by 26% since 2002 while the area's population has increased 49%.

1 Mike Lindell, CEO of MyPillow, was banned from Twitter... 2 Shailene Woodley shares her tips on how she copes... 3 Muslims celebrate Eid al-Fitr with joy and worry 4 Ray Charles and The Judds join the Country Music Hall... 5 Shoes, elastic pants: Office wear is changing amid... 6 Two people were rescued by rescuers 50 hours after... 7 Starts the evacuation of civilians from the Ukrainian... 8 Trump's attempt to shape the GOP faces a test... 9 2022 midterms: What you need to know about the primaries... 10 Met Gala returns to its traditional spot on the first... 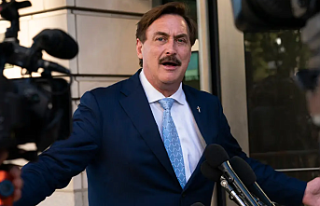 Mike Lindell, CEO of MyPillow, was banned from Twitter...