Security forces intensified their operations against El Salvador's street-gangs Tuesday, with mass arrests and the cordoning of neighborhoods. 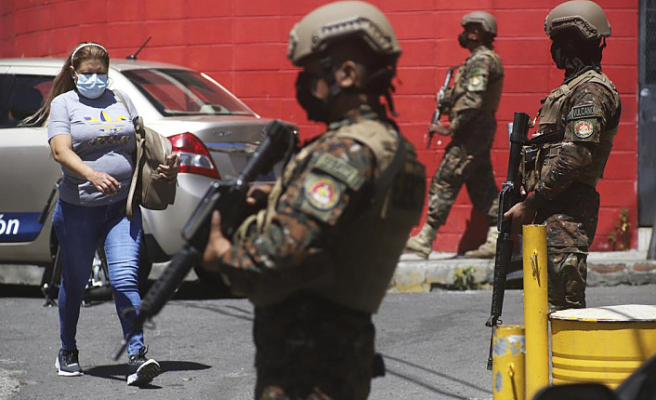 House-by-house searches were conducted under a state emergency. This has raised concerns among some organizations that it could lead to human rights violations.

President Nayib Bukele didn't back down in the face of growing criticism. He announced late Tuesday that he had asked Congress president to convene legislators to give him additional legal tools to fight gangs.

One of Bukele's most notable achievements was the country's low homicide rate under his administration. Although some doubted the method, the country was living in relative peace as opposed to previous periods of bloodshed.

Rodolfo delgado, Attorney General, stated that nearly 1,500 alleged members of gangs were captured in the last two days "without firing one shot."

Esteban Maravilla who works in transportation said, "I've been a victim to the gangs, and I've paid (extortion)" They should lock them up.

Bukele is a popular choice in El Salvador. However, some of its heavy-handed tactics have been criticized.

Opposition politicians and other nongovernmental organizations claim that security forces have gone beyond their newly increased powers.

Human Rights Watch stated Tuesday in a statement that the government should confront gang violence but still respect rights. The organization stated that instead of protecting Salvadorans, a broad emergency is a recipe to disaster that puts their rights at stake.

The Inter-American Commission on Human Rights condemned the use of gang members in prison to keep them locked up 24 hours a days and limit their meals to just two meals per day.

The commission stated that "the prisons' policies are repressive and can lead to serious violations of human rights for persons who are deprived of liberty."

Stephane Dujarric spoke for Antonio Guterres, Secretary-General of the United Nations. He said that he was concerned by the rise in gang killings. The Secretary General believes that the government will take measures consistent with international human rights laws and standards.

Bukele replied via Twitter to say that the organizations that criticized his actions had not done anything to aid El Salvador in fighting gangs.

Eduardo Escobar was the director of Citizen Action, a non-governmental organization. He noted that although the emergency did not include restrictions on mobility, security forces had placed a ring around some neighborhoods to control who entered and left.

Soldiers wearing masks and carrying rifles stopped people from entering or leaving the San Jose El Pino neighborhood of Santa Tecla, near the capital Tuesday. They searched backpacks and cars, and requested identification documents. An Associated Press reporter was denied entry by the soldiers.

Hector Flores, who was standing near a military barricade, said that "I have my (identification and employment card) and I haven’t had any problems." "The soldiers and the police entered Sunday night, and went house-to-house. They took the gang members (gang members), but they are still looking.

Claudia Ortiz, a national lawmaker from the conservative Vamos party, stated that "free transit was not restricted (in the state emergency) and there are already residents denouncing the encircling neighborhood."

William Soriano, a lawmaker representing Bukele's New Ideas party suggested that the rise in murders could be a sign from the gangs following the takeover of two bus routes in the capital by the government earlier in the month. Transportation companies and drivers are being extorted by the gangs, and nearly 300 vehicles were taken over by the government. This cut down on revenue.

Soriano stated that "Coincidentally, after they intervene on certain public transportation routes that function as a means to launder money and as a source income for the criminal gangs,... this spike occurs." It means that they are directly touching the pockets of gang members.

The emergency state could last for up to 30 days, and may be extended.

Bukele has lashed out at politicians from the past administrations that allegedly made pacts for lower killings in return for prisoner leaders. He has denied that his administration entered into similar deals.

1 Clever gardening: these plants in your bed are stronger... 2 How you can finance a real estate purchase 3 Russian reporting rules impede, not muzzle, journalists 4 Russia blames Ukraine for fuel depot blast; Kyiv denies... 5 Pope issues historic Indigenous apology for Canada's... 6 Russia: Russia pushes to pay gas in rubles, not disrupting... 7 The UK is suffering from high energy prices. It is... 8 7 Engineering and Technological Advances From All... 9 Could The Future Of Web3 Have Local Communities Determining... 10 Reasons to Bet on Horses at a Casino Clever gardening: these plants in your bed are stronger...