The physical change of Nadal, eternal champion of Roland Garros: from pirate pants to tics

Seventeen years ago the world was different. 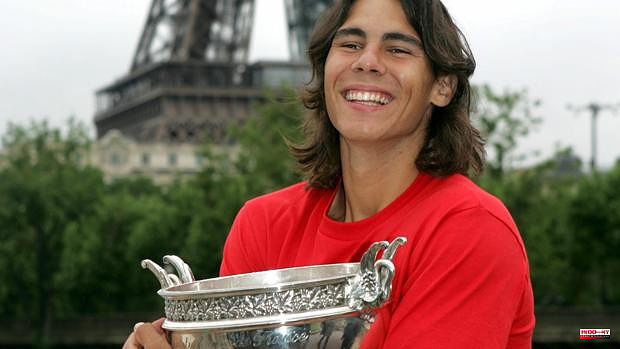 Seventeen years ago the world was different. The Internet sneaked into our lives like lightning, but there was no Twitter, no Instagram, and YouTube was just an experiment in Silicon Valley whose future was unknown. In Spain, José Luis Rodríguez Zapatero ruled and Fernando Alonso had not yet won his first Formula 1 title. In tennis, Roger Federer began his golden age as a dazzling number one in elegance after the reign of Pete Sampras in the nineties. But at that Roland Garros the favorite was a debutant who was 18 years old. Before the German Lars Burgsmuller, number 96 in the world ranking, Rafael Nadal premiered on May 23, 2005 on the clay of Paris.

And so until today, spring of June 2022, immovable and eternal.

Until 2005, Nadal had never played at the Bologna Forest facilities that house the Roland Garros complex, west of Paris, between the Periférico and the Seine River. His parents, owners of a glass manufacturing company based in Manacor, never admitted that the young Rafael suppressed his end-of-year exams to go play the junior tournament in the French capital. In the family the first thing was studies.

In this way, the Balearic tennis player turned his debut on May 23 into a stairway to heaven. He beat the German 6-1, 7-6, 6-1 and overwhelmed the competition that came his way, Malisse, Gasquet, Grosjean, Ferrer, Federer in the semifinals and the Argentine Mariano Puerta in the final. That last game was very symptomatic: Puerta tested positive for doping control for etilefrine, a prohibited product, and was sanctioned for eight years. Nadal consummated a unique work, debutant and champion.

It was a teenage-looking Nadal, long Mowgli-style hair, white capri pants below the knees, a green tank top, and a wild-looking headband tied to his hair. A tennis player who was impossible to break in a rally, endless exchanges of him from the back of the court until the rival gave up, and that he came by legs to any impossible whiplash. Nadal was a physical extravagance whose image of energy and passion pierced the traditions of Roland Garros.

He was an athlete who spoke English with some difficulty and who did not master verb tenses. With his natural self-confidence at the age of 18, Nadal settled that issue. «They make me laugh and I don't try anymore, so I will continue speaking in Spanish».

What Nadal, who then announced Cola Cao as appropriate to his age, did not know was that that seemingly unimportant injury in 2004, a stress fracture of the scaphoid in his left foot, was going to become a constant martyrdom in his sporting life. .

Seventeen years have passed and Nadal is still at the forefront. A case of unique appearance in tennis (Bjorn Borg, who could have had a similar sequence of successes, retired very young) and also in world sport. He started winning when he was 19 years old (he turned them during Roland Garros 05) and only the foot injury seems to complicate his future with 36 in his chain of 14 titles.

Nadal has not changed his essence, fighting spirit, competitive ability, exemplary in defeat, courteous to the rival in victory, but many accessories that accompany him. He is no longer so daring in the fashions presented to him by his sponsor, he speaks English fluently, his capillary strength has disappeared, he has acquired tics necessary for his concentration (the tapping on his shoes to shake off sand, the gesture around the nose before each serve, the probing of the underwear, the towels placed millimeters on the shelves, the bottles in line) and their infinite rallies from the bottom no longer prosper. He has become more resounding with the winning shots, his serve has improved a lot, he has evolved in his repertoire...

Tennis and Roland Garros have also transformed over the years. Now there is a super 'tie break' in the fifth set of the matches; the emblematic central court Philippe Chatrier now sports a retractable roof that cancels out the rain and allows you to continue with the day; the night session was established last year and the tournament is no longer governed by the twilight of sunset, but by the unlimited time of artificial light; and there is a time to serve (25 seconds) that Nadal manages carefully after a lot of training to avoid warnings...

The components of the tennis player's box have also changed, his security guard in whom he floats confident. No longer is Toni Nadal, the coach of the family of athletes (the other uncle, Miguel Ángel, was an international footballer) and forger of the tennis player's career, but Carlos Moyá, in this order idol, friend and current coach of Rafael Nadal. Marc López, an intimate of the champion with whom he won gold in doubles at the 2016 Rio Olympics, has joined the cast.

Everything has changed, the opponents, the rules of the game, the journalists who followed him... Nadal's body is now full of scars. And the mental strength and fighting spirit of a unique guy trained to win Roland Garros remain unchanged.

1 Pope Francis fuels speculation about the future of... 2 Bolsonaro uses medals to honor allies, his family,... 3 At least 38 people are killed in Iran's building... 4 The Ruling Party seems poised to win the Cambodian... 5 Australia: China threatens plane in South China Sea... 6 Nadal: I don't know what the future holds, but... 7 Vietti leaves Canet with no first Moto2 win 8 Alarms villagers when a volcano in the Philippines... 9 Second day of fighting fire near Athens by Greek firefighters... 10 Murphy rejects assault weapons ban and new background... 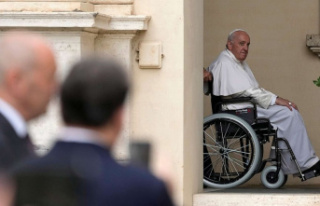 Pope Francis fuels speculation about the future of...