The champion Great Prospector, the fastest in the sprint of the Urquijo Grand Prix

In a sensational afternoon - evening, one of the most important days of the Spring Season was held yesterday at the Madrid Hippodrome, with a large audience, who enjoyed a lot of the emotion of the horse races, the show, the music and gastronomy. 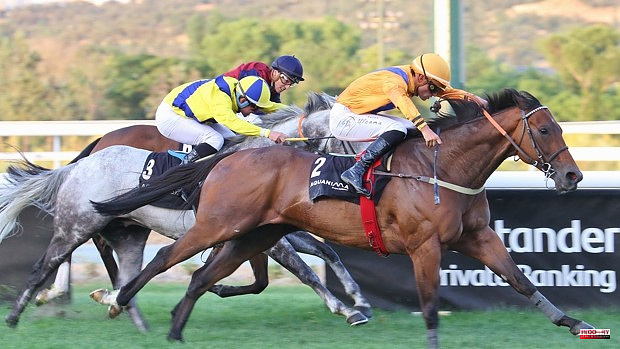 In a sensational afternoon - evening, one of the most important days of the Spring Season was held yesterday at the Madrid Hippodrome, with a large audience, who enjoyed a lot of the emotion of the horse races, the show, the music and gastronomy.

The ALBERTO DOMPER PRIZE began at 6:45 pm with the first race, for horses and mares three years and older. Five candidates for victory. 2,400 meters of travel. Very tactical race that was decided in some very exciting last meters with three horses fighting for victory until the very finish post. Orbayo was the one who finished off with more force, achieving victory in extremis.

A head behind came Philau to be second, while Astral, which until the last moment seemed to be the winner, had to settle for third place, also by one head.

In second place, the EQUIAN AWARD (MADE IN SPAIN) was held for two-year-old colts and fillies that have not raced. nine participants. 1,100 meters in a straight line. Safaga had a promising debut, proving to be superior to his rivals, winning by three lengths. Arquetu also liked in this his first performance, which he withstood by a head, Fortunato's late attack.

The third race was the PREMIO HIPÓDROMO DE LA CASTELLANA, for horses and mares aged three and up. Eight specimens covered 2,000 meters of distance. Arenal, with a spectacular mount by Julia Zambudio, won practically from end to end and with great authority by a length and a quarter, surprising his rivals and the bettors. Eminence came second, with Sir Roque third half a length. The winner was paid almost 21 to 1, the twin at €86.30 and the trio at €1,382.50.

In fourth place was the ROBERTO LÓPEZ AWARD (CLAIM) (Lototurf), for horses and mares three years and older to sell for €11,000, €15,000 and €18,000. Nine candidates for victory started from the 1,400-meter pole. Incredit came out of the drawers in a great hurry, setting a fast pace to the test, arriving outstanding to the final stretch in which he soon disappears. Corps des Pages, always well placed, with a great change of pace, went easily towards the finish line, winning by more than four lengths. Second came his yard partner Iron Duke, being third almost two lengths, Pretty Emerald.

In fifth place, the URQUIJO GRAND PRIX (SPONSORED BY AQUANIMA) was held, bringing together the best sprinters of our Turf. Eight contenders for victory over the distance of 1,100 meters in a straight line. Race with a beautiful and super exciting ending in which the champion Great Prospector, with his strong shot, was the fastest, managing to take the victory. Three quarters of a length behind him came his teammate Speak in Colors who sold his loss dearly, along with Kendaya who also closed a lot and was third by a head.

The sixth race was the PREMIER GALOP AWARD, for three-year-old colts and fillies that have not won €18,000 in prizes. Nine participants, 2,100 meters of travel. Mace Windu always in the leading positions throughout the course, in the final stretch he attacked with force and determination to go straight to the finish line and get his first victory. Second was Highland Market, which was also in the forefront and closed a lot in the final meters, reaching half a length. Six Rivers Finishing off late and with very good style, he got third place, reaching two lengths. They disappointed Arenas de Sanpedro who could only be fourth and Tiger Bash who came in seventh position. The Winner paid 22.20 to 1, the Twin paid €113.60, while the Trio paid €3,197.60

THE DAY - SAND AND FIBER TRACK

He closed the day in seventh place, the TERRE DE FRANCE AWARD, a reference handicap, for horses and mares three years and older, over the distance of 2,400 meters. Six candidates for victory, under the orders of the Start Judge. Aretha achieved a resounding victory by more than four lengths after practically taking the race from end to end. Second came Crimson Mystery who finished off a lot in the final meters, being third, three quarters of a length behind, Lady Red Moon.

1 Clamor in Talavera for the burial of the AVE: «We... 2 Seoul: North Korea sends suspected artillery pieces... 3 Seven arrested after a brawl in a subway car on line... 4 The College of Physicians of Toledo recovers its traditional... 5 The legend that places the true origin of the jota... 6 A woman kills her partner and dismembers him with... 7 The 'porpoising' leaves Hamilton crippled:... 8 Appeal made by Prince Sparks Row over UK Rwanda deportation... 9 Coronavirus in Valencia: when will those over eighty... 10 NATO Chief: Turkey has "legitimate concern"... 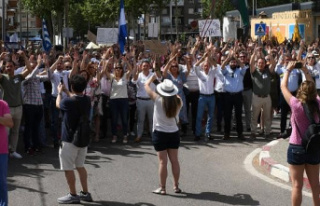 Clamor in Talavera for the burial of the AVE: «We...