Dance of positions in the last 24 of the first stage of the Sardinha Cup between the French port of Saint-Gilles-Croix-de-Vie and the Portuguese port of Figueira da Foz. 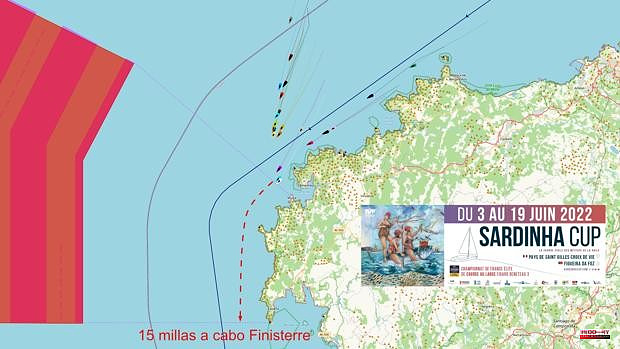 Dance of positions in the last 24 of the first stage of the Sardinha Cup between the French port of Saint-Gilles-Croix-de-Vie and the Portuguese port of Figueira da Foz. If yesterday the leader was the «Mutuelle Bleue» of Corentin Horeau and Julien Villion, this has been relegated to fifteenth place at 7.46 miles from the first, to take the lead of the fleet of one-design Figaro 3 the «Ageas - Team Baie de Saint-Brieuc» by Garnier Mael and Leboucher Pierre.

Everything was cooked late yesterday Wednesday when the fleet divided into two groups through the shores of the cliffs of Cedeira. Six crews preferred to sail close to land while the rest of the fleet preferred to sail along the sea with a lateral separation of about 8 miles further to the northwest.

The intensity of the wind was less during the night, causing the sea crews to carry out a couple of tacks to reduce the lateral separation with the group that had escaped by land because the lateral separation was already 10 miles and did not benefit them en route to Cape Villain downwind of his position. In fact «Teamwork» and «Amarris - Primeo Energie» insisted on gaining latitude south to try to hunt down «Ageas - Team Baie de Saint-Brieuc», as they did by reducing their distance with the leader to 0.64 miles and 2.09 miles at 3:00 p.m. Thursday, June 9, 2022.

In the last part of the positions at 3:32 p.m., when they are 185 miles from Figueira da Foz, «Teamwork» is already first with an advantage of 0.30 miles compared to the second «Ageas - Team Baie de Saint-Brieuc». But these position dances will be seen more throughout the descent along the Galician and Portuguese coast until the arrival in the Portuguese port.

There are two critical sections in the descent towards Figueira da Foz. A first between Cape Finisterre and Viana do Castelo, about 72 miles, passing through the Galician estuaries, the high coasts are mixed with the entrances of the estuaries, between Cape Silleiro and the mouth of the Miño River where the walls of the mountains of the Gorba and La Valga reach over 500 meters in height. And a second section between Viana do Castelo and Figueira da Foz, with a low coast with a plain that penetrates about 40 kilometers inland. These geographical accidents always alter the meteorological conditions on the coast, despite the fact that the direct route to the arrival remains well separated from the coast.

1 The Illes Balears Clàssics recovers this year the... 2 Solo crossing and A2 of the Real Club Astur de Regatas 3 Iceta is rooted in the defense of the audiovisual... 4 Culture reserves a quota of 25% to authors in co-official... 5 The Government tries to take the meeting on the future... 6 Aznar on what happened with Algeria: "It is difficult... 7 The PP criticizes that the municipal government does... 8 Luis López, 'predictable' relief at the... 9 The University of Valencia dismisses the director... 10 Carriedo assures that the daughter of the murdered... 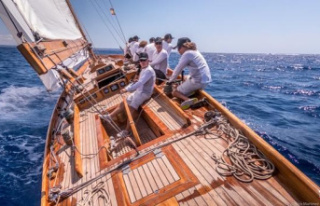 The Illes Balears Clàssics recovers this year the...