Ramada and Óscar Peixoto and Nano Yáñez and Manuel Fernández, Galician champions of A Dos

Baiona elevated the new Galician champions of A Dos this Saturday after the celebration of a new edition of the MRW Trophy, in which not only the absolute, mixed and women's regional titles of navigation in reduced crews were put into play; but also the awards of the VIII Rafael Olmedo Memorial. 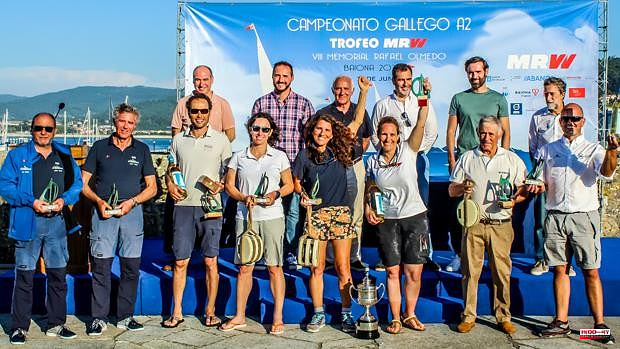 Baiona elevated the new Galician champions of A Dos this Saturday after the celebration of a new edition of the MRW Trophy, in which not only the absolute, mixed and women's regional titles of navigation in reduced crews were put into play; but also the awards of the VIII Rafael Olmedo Memorial.

The male prizes of the two classes in dispute (ORC and J80) went to the couples formed by Rui Ramada and Óscar Peixoto (ORC) and Nano Yáñez and Manuel Fernández (J80), both from the Monte Real Club de Yates. They were the best in the competition and are, as of today, the new Galician A Dos champions, as stated on the plaques given to them by the Royal Galician Sailing Federation.

In this edition of the Galician Championship, in addition to the men's prizes, distinctions were awarded again, as had been done in the previous edition for the first time in the history of the competition, to the best female and mixed crews.

The creation of these special categories depended on the number of entries in each of them and managed to form the female category in J80, with the winners being Marta Ramada and Ana Sardiña, from Monte Real; and mixed in ORC, where the couple formed by Brenda Maure and Jacobo Vecino, from the Real Club Náutico de Vigo, won.

The development of the test was a full-fledged nortada. The north wind blew sharply and with intensity from the start, which occurred promptly at eleven in the morning; to the turning point at the Camouco lighthouse, in Ons; and remained the same, both in direction and intensity

(13-15 knots with peaks of 19) to the finish line, which the regatta committee placed inside the Bay of Baiona.

The largest sailboat in the fleet, the Yess (a Hanse 630 E), owned by Rui Ramada and Óscar Peixoto, completed “flying” a total of 35.3 miles. It took just two and a half hours to turn the Camouco and just over four and a half hours to finish the test.

Among the rest of the crews, those of the Deep Blue, the Salaño Dos, the Orión, the Fend la Bise and La María stood out. This group of five boats, from the Real Club Náutico de Vigo, the Monte Real Club de Yates and the Club Náutico de Cabanas, all with great sailors on board, always remained at the head of the fleet without losing sight of each other. the others.

El Yess (MRCYB) finished the winner of the MRW Trophy in the ORC class, leaving the second and third position to Salaño Dos of Jacobo Vecino and Brenda Maure (RCN Vigo) and Orión of Javier Pérez and Esteban Gañete (MRCYB)

These last two boats concentrated all the attention of the Figaros fleet due to the intense hand in hand they maintained throughout the test; and due to the fact that managers from Monte Real (the vice president and sports director at Tutatis) and club coaches competed. Finally, it was the trainers who were awarded, after gaining distance in the last miles and completing a great regatta finale.

In the J80 real-time competition, the surprise of the day was given by Francisco Javier Martínez and Alfonso Otero's SND Cormorán, tacking the first at Camouco; although he finally finished the test in second position behind Cansino de Nano Yáñez and Manuel Fernández, one of the most solvent in the entire test. After the gold and silver of the two Monte Real boats, the bronze of the monotypes went to ¡Ay Carmela! of the Liceo Marítimo de Bouzas, manned by Juan Martínez Pazó and José Ignacio Correa.

Within the framework of the MRW Trophy, in addition to the Trophy prizes and the plaques to the new Galician Champions of A Dos, the prizes of the VIII Rafael Olmedo Memorial were awarded to the general winners of the two classes in contention: the Yess (ORC) and the Tired (J80). They received them from Rodrigo Olmedo, son of the former president of Monte Real for more than 40 years and to whom this competition has been dedicated for 8 years.

Participating in the awards ceremony, which took place with a very good atmosphere in the gardens of Monte Real, were the president of the organizing club, José Luis Álvarez; the executive director of MRW and sponsor of the competition, Santos Almeida; the mayor of Baiona, Carlos Gómez; the Deputy for Sports of the Pontevedra Provincial Council, Gorka Gómez; and the president of the Dinghy Sailing Committee and director of the Royal Galician Sailing Federation, Ignacio Campos.

1 The five Valencian towns that Ikea intends to reactivate... 2 Two alleged thieves die when jumping from a bridge... 3 They look for the remains of a corpse after finding... 4 A group of Chavista radicals attack Guaidó on his... 5 Extreme heat alert: list of Valencian municipalities... 6 Joaquín Benito de Lucas and Pedro Tenorio, in memory 7 The best hamburger in Spain: what are its ingredients... 8 Carriedo highlights the joint effort in the success... 9 They judge a man for sexually assaulting and threatening... 10 The Board offers 1,767 places in the 14 university... 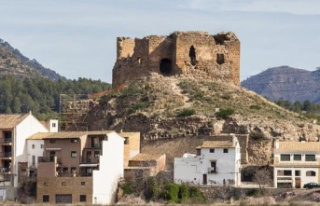 The five Valencian towns that Ikea intends to reactivate...