BROOMHILL FC has entered into a partnership agreement with Open Goal. This will see Simon Ferry become manager. BROOMHILL FC has entered into a partnership agreement with Open Goal. This will see Simon Ferry become manager.

On Wednesday, both parties announced the "revolutionary agreement" with Lowland League to transform Open Goal Broomhill FC starting in 2022/23.

Open Goal will distribute a variety club content. There are plans to produce a monthly fly on the wall documentary, as part of the club's promotion to the SPFL.

The plans include a weekly podcast featuring guests from the coaching staff and the playing staff.

Ferry stated that he was thrilled to be appointed to his first managerial role in football. It had been a long-held dream of his.

Open Goal is an amazing project that allows you to take the first step.

"We are hoping that the amazing Open Goal fans will get behind the team and show their support for every home game. It is vital for our pursuit of success.

"There will be some great online content, but my primary role is to build a winning team at the park with the goal of bringing silverware and promotion to the club.

"Finally, Jim McInally and The Peterhead Board are to be thanked for seven wonderful years as a coach and player at the club and for their support in my decision to become a coach."

George Fraser, Broomhill FC's general manager, stated that Open Goal's vision for the club aligns with ours, and it was a perfect partnership.

"We've always been a club that does different things and we couldn’t turn down the opportunity to help the team move forward on and off the field.

"Our club's future looks bright and we are excited to welcome Open Goal fans at our games and show off the best of Scottish non league football."

"It's an exciting new direction that allows me to push the boundaries in showcasing Scottish Football through my video and podcast content in a positive, authentic, and engaging way." We are optimistic that the partnership will bring the lower league significant exposure, driving attendance and interest in the sport.

"Simon is the perfect candidate to be First Team Manager. His career spans more than 14 years. He has a great reputation and passion for the game. We're all excited to see how the team's journey unfolds.

"Our success is due to the support of our fans. They have supported us from the first Si Ferry Meets... interview through to the sale of two Hydro tickets. We hope they will continue to support this venture, which will bring success to Open Goal Broomhill FC. This is how we aim to highlight the drama, character, and excitement of non-league football here in Scotland.

1 Elon Musk invites MPs to discuss Twitter plans 2 Ovo, the energy giant, moves into the PS30m Glasgow... 3 These 10 NFL rookies could be instant fantasy football... 4 Carman Deck: A man was executed with lethal injection... 5 Condors from California return to the skies above... 6 Netflix cancels shows in rare subscriber slump 7 Casey McQuiston knew their book would be banned. They... 8 Marvel fans are vocal about their Fantastic Four Director... 9 The New York Recording Studios You Should Know About 10 A-League Men's Team of the Week Round 25 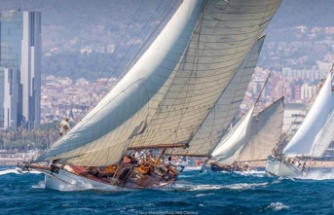