As soon as Roland Garros finished, Rafael Nadal laughed at the possibility of linking another Grand Slam; a third, in London, which would lead him to an unassailable milestone since 1969 in the men's circuit: the four greats in the same course. 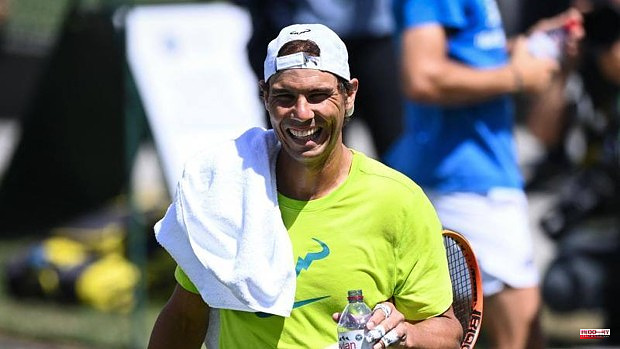 As soon as Roland Garros finished, Rafael Nadal laughed at the possibility of linking another Grand Slam; a third, in London, which would lead him to an unassailable milestone since 1969 in the men's circuit: the four greats in the same course. “Right now, yes, he is crazy,” he assured between laughs. But after six months of hiatus he lifted Australia, after many more difficulties and tests to numb his foot, he lifted Paris, and after another treatment so that the numbness would last longer to avoid puncturing himself in each game, the Balearic walks on the grass of London with determination on his face. And without pain. It is London, it is true, a place that he conquered in 2008 and 2010 and that he has not set foot in for three years; but it was also Australia in January, where he hadn't won since 2009; and it was also Paris, with many doubts.

After biting his fourteenth Roland Garros, the man from Manacor treated his foot and traveled to London on Monday to try it out. He has been able to sample even the center court, which has always been closed until the opening match, but which was opened for the Spaniard and for Matteo Berrettini in 2022. There are no alarm signs on his feet and there is a lot of optimism: «If I am here It's because things are going well. I am happy with how the situation has gone. I can walk normally most days. When I wake up I don't have that pain that has been with me for a year and a half, so I can only be happy. And in training, in general they have been good. Some days better, some days worse, but in the last two weeks I haven't had any of those horrible days where I couldn't move at all. It's all positive." A bad eye awakening on Saturday remains as an anecdote, which forced him to finish training with sunglasses, in an unusual image in the world of tennis.

He has already marked his route, which begins tomorrow, Tuesday 28, with Fernando Cerúndolo, a 23-year-old Argentine and 42 in the world. For Nadal, 36 years old and 4 in the world, that is the main and only objective at the moment: an unprecedented player in his history. He has no references from previous clashes and they are not worth much in a tournament as unique as Wimbledon, more so than any of the surprises because it is difficult to get used to the surface and the ball does not always end up where you want it. “I haven't played here in three years and it's always a challenge. Compared to other surfaces, here you have less control over what can happen. Although you know that when you enter the court you can win and lose, it is a little less predictable on grass », he assumes. He is coming with no previous tournaments and a win and loss at the Hurlingham exhibition. Hence, there has been another double-session training marathon as happened in Paris. “There is less room to defend yourself, so you can just attack, without thinking too much.”

He is looking for himself, for that Nadal who, for example, signed three consecutive finals (2006, 2007 and 2008, his first title), or those consecutive semifinals of 2018 and 2019, his last game in London. "After three years you forget what worked and what didn't, so you have to discover yourself again," he analyzes.

And although he focuses on the day to day, it is inevitable to observe that it will be neither a placid premiere nor a painting with a margin. They emerge as sharper thorns for Sam Querrey already on the second day, he lasted more for height and serve than for name and titles, but this is grass and here everything is favorable for the ranking to break the logic; furthermore, a possible crossover with Marin Cilic, semifinalist in this past Roland Garros and another who has a frightening service, in the round of 16, and a very complete Felix Auger-Aliassime who took him to five sets in Paris -and beat him in Hurlingham- , the hypothetical menu in quarters. Only those around him know how to assess whether or not it is crazy to prepare the body for that possible confrontation with Stefanos Tsitsipas or Matteo Berrettini in the semifinals before the duel of duels, which this time would be with the final prize at stake, against Novak Djokovic or Carlitos Alcaraz next July 10. Only Nadal knows if madness can enter his logic.

If Nadal needs to revisit his history to rediscover the best version for grass, Alcaraz is forced to invent a new Carlitos for this surface. He debuted with victory last year before colliding with Daniil Medvedev, and he has not had much baggage this year either, just two games, two defeats, in Hurlingham, which do not give too many clues as to how the 7th in the world will face this third Grand Slam of the year.

After winning in Rio, Miami, Barcelona and Madrid, he does not want to think about the expectations he has aroused in people and only focuses on himself, on learning to handle himself on a tricky surface for everyone, but especially for the less experienced: «The most complicated part is mobility, it is what costs me the most. I watch videos of Federer, Djokovic, Nadal and Murray to try and copy their moves." In addition, that compressed right elbow in bandages has added doubts to his preparation, but the Murcian (19 years old) wanted to eliminate them completely: «No discomfort. We are adapting to playing with the elbow protection, which he had never played with. So far I'm doing pretty well. I am playing without thinking about the elbow. We are one hundred percent ready. I already said that I had not been able to have a good preparation, but I always come to each tournament thinking that I am capable of achieving good results and even winning it. I think my game can adapt well to grass, because of the aggressiveness, trying to get up to the net."

His debut at Wimbledon begins today, against Jan-Lennard Struff (around 3:30 p.m., Movistar), and although he has not seen much beyond that first German obstacle, names like Fabio Fognini in the second round, Jannik Sinner or John Isner for the round of 16 or even Djokovic in the quarterfinals. Andújar, Ramos, Davidovich, Taberner, Verdasco, Munar and Carreño also make their debut today.

1 Tom Jones: The Crooner's Triumph 2 Técnicas Reunidas: Spanish technology for the industrial... 3 Carlos Taberner: «The buttocks and legs get more... 4 Bale drops from 20 million a year to a million and... 5 The innkeepers of Madrid who want to teach Grant Achatz... 6 Pérez-Reverte delves into the Mexican Revolution... 7 Intimate and never-before-seen photographs of Dora... 8 In the villages you are also welcome 9 Paula Sevilla flies in Nerja 10 Foreigners in their own city 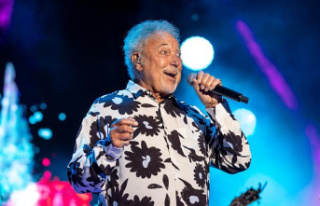