The fleet is sailing northwest at a very good speed after taking the start yesterday, Sunday, in the port of Le Sables d'Olonne. 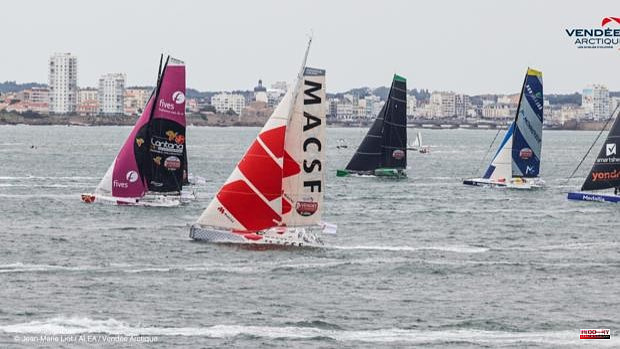 The fleet is sailing northwest at a very good speed after taking the start yesterday, Sunday, in the port of Le Sables d'Olonne. In first place the trio formed by Isabelle Joschke's “MASCF”, Jérémie Beyou's “Charal” and Romain Attanasio's “Fortinet – Best Western”; He is closely followed by Charlie Dalin aboard the «APIVIA» just 4.5 miles from the first.

The first night of the Vendée Arctique was very dynamic. In a flow of 20-25 knots, the competitors sailed against the headwind, a configuration in which foilers are especially comfortable.

"The ship was going very well last night," said Alan Roura (Hublot). "It's a bit tricky to find a rhythm. I nibbled on the carrots because heating the water is difficult. Sleep-wise I only managed to get 20 minutes out of it. Louis Burton said I had reached speeds of 35 knots."

A slowdown in the IMOCA fleet is expected throughout the afternoon, and two options arise. Some boats with straight daggerboards have chosen a shorter, but less windy, route further north. The vast majority of the fleet (including all foilers) have gone further south to get a better angle and favor speed. The most anticipated quartet is here. Charlie Dalin (APIVIA), Jérémie Beyou (Charal), Louis Burton (Bureau Vallée) and Thomas Ruyant (LinkedOut) are less than 5 miles apart this morning (in qualifying at 7am). Romain Attanasio (Fortinet-Best Western), the leader at 07:00, has moved slightly north. The competitors will be turning their trajectory towards the north throughout the day. The pace should start to slow down from midday and the leaders will really hit the crest of highs starting this afternoon. The next night promises to be complicated, with very light winds. The exit of the high pressure ridge is expected tomorrow morning for the leaders.

Problems for Hungarian Szabolcs Weöres who returned to Les Sables d'Olonne last night after encountering a problem in the hydraulic system that controls the tilting keel of his IMOCA «Szabi Racing». "At the moment we don't know what the solution is. I hope we can fix it. We don't have a fixed plan yet, but we are working on it," said the Hungarian skipper on the jetty. By regulation, he has to return to the water tomorrow at 5 pm to continue in the regatta.

Clarisse Crémer and Maxime Sorel participated in the first edition of the Vendée Arctique - Les Sables d'Olonne in 2020. This year they are not competing, but it is for a good cause: Clarisse is in for a happy event, she will be a mother, and Maxime will debut soon a new IMOCA boat. Nevertheless, the two sailors follow the regatta closely and their analysis is instructive.

Regarding the sporting level of this 2nd edition, Maxime Sorel says: “There really are all kinds of IMOCA boats, although there are no new boats. We should see those who have been at the front of the pack in recent regattas like APIVIA, Charal, LinkedOut, Bureau Vallée. Louis Burton is starting to get his bearings on his ship. Also keep an eye on Romain Attanasio, who has yet to be seen racing on his new boat, and Benjamin Dutreux. In the boats with straight drifts, Nicolas Lunven made an extraordinary regatta in the “Guyader Bermuda 1000 Race”. Loners will have to cross a high pressure ridge. Depending on the positioning, it will be more or less easy, but you can get away with it. There is a tailwind behind them, not very strong, so we may see a straight drift boat in the top five when we get to Iceland.”

For Clarisse Crémer it is a bit frustrating not to be able to participate, but she has assumed that for now it is not the time to haggle. “Yeah, it's a bit frustrating, but it's for a good cause. I'm going to follow it to the end, like the Bermuda 1000 Race. I will look at the map several times a day, to understand the strategic options of each one. I do not look at any person in particular, but I analyze each group. Afterwards, obviously, I will have an eye on Nicolas Lunven, who will replace me in the IMOCA «Banque Populaire»”.

For Maxime Sorel: “I am going to follow the regatta, although for the first five days I will be in an area without a net, so I won't be able to see anything, but afterwards I will. I'm super jealous I'm not there! My boat is currently under construction. Lately I've been sailing a bit on other boats, but I would have done this Vendée Arctique to prepare for the rest of the programme. I think it's a very good way to find the right settings on the boat, to get to know the boat, to get to know the machine and also on a new course.”

1 Philosophy of the comic: when humor has to survive... 2 Everything you need to know to retire early 3 José Vicente Morata, re-elected president of the... 4 CF Talavera announces coach, sports director and president 5 Valencia goes from hosting the largest brothel in... 6 The Diputación de Alicante and the NGOs detail the... 7 What role does Russia have in the crisis between Spain... 8 Bitcoin sinks more than 10% after the 'corralito'... 9 The Adlib Ibiza catwalk celebrates its 51st edition... 10 Opera air bridge: the Teatro Real and the Liceo create... 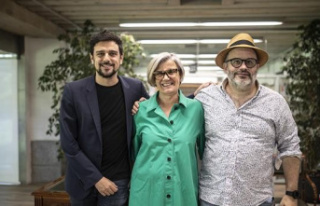 Philosophy of the comic: when humor has to survive...