'Great Prospector' - 'Kitty Marion', duel in the sprint of the Urquijo Grand Prix

This Saturday, June 11, a new afternoon/evening day with the Spring Grand Prix Festival at the Madrid Hippodrome, in which the emotion of seven races will be experienced and you will be able to enjoy a very pleasant atmosphere, from 6:00 p. 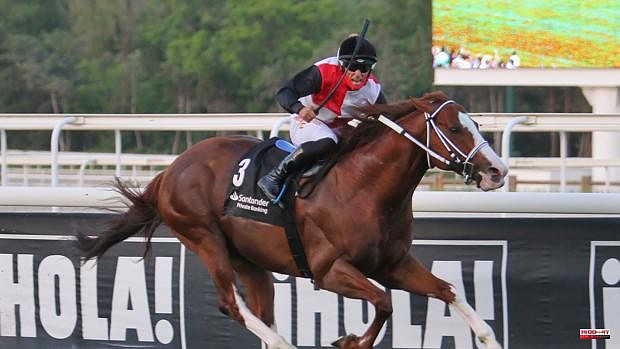 This Saturday, June 11, a new afternoon/evening day with the Spring Grand Prix Festival at the Madrid Hippodrome, in which the emotion of seven races will be experienced and you will be able to enjoy a very pleasant atmosphere, from 6:00 p.m. hours until 01:00 hours

A large part of the racecourse's summer gastronomic offer will be inaugurated, such as the Villa Panthera Terrace, private restaurant, Japanese fusion. A new gourmet Champagne Bar Clicquot area where you can combine Clicquot Champagne with the gourmet offer of food trucks.

And the star restaurant of the summer nights located at the foot of the track will have the signature of chef Ramón Freixa, under the direction of Life Gourmets, who through a new restaurant called 'Calor' will offer the people of Madrid an ephemeral experience in one of the coolest and funniest places in the city, where you can mitigate the heat with the thrill of horse racing and a menu that will meet all possible expectations.

It will serve its most iconic dishes, and signature cocktails.

In our gardens, as always, there will be a wide range of foodtruks that will be enlivened by live music after the races finish.

The Iberia Talent Ranking on board continues to be more exciting than ever. Five of the best jockeys are tied for victories in the Grand Prix of the 2022 season, and will seek the lead in the statistics with the Urquijo Grand Prix. Vaclav Janacek, Borja Fayos, Jaime Gelabert, Ricardo Sousa or Fabrice Veron will seek to continue adding points in the next Grand Prix and become the first winner of the Iberia Talent Ranking on board.

The sports program will have six races on the grass track and one on the sand track. The most outstanding is the Urquijo Grand Prix, the great sprint test, over a distance of 1,100 meters in a straight line for horses and mares three years and older, in which the two great sprinters of our turf will face each other for the first time: Great Prospector and Kitty Marion.

The afternoon will begin at 6:45 p.m. with the first Alberto Domper Prize race, for horses and mares three years and older. Five candidates for victory. 2,400 meters of travel. Astral is going through a great moment of form and has shown that he does the distance very well, it will be very difficult to beat, although Embat and Orbayo will be tough rivals.

Secondly, the Equiano Award (Made in Spain) will be held for two-year-old colts and fillies that have not raced. nine participants. 1,100 meters in a straight line. All beginners, which makes the prognosis quite difficult. In any case, the ones I like the most and I see with more options are Safaga, Rationalexuberance, Fortunato and Faith Rose.

The third race will be the Premio Hipodromo de la Castellana, for horses and mares three years and older. Eight specimens, 2,000 meters of distance to travel. The race should go through the pupils of Guillermo Arizcorreta, Inés, Sir Roque and Eminence, they are very fit, they overcome the distance and have shown that they have the courage to compete in it. As the strongest enemy I see Hades, he is impressing in every outing and we don't know the ceiling of him. He is going to make things very hard.

In fourth place will be the Roberto López Prize (Claim) (Lototurf), for horses and mares three years and older to sell for €11,000, €15,000 and €18,000. Ten candidates for victory will start from the 1,400 meter pole. Iron Duke and Corps Des Pages, prepared by Óscar Anaya, are the ones I like the most, they come from winning showing form. I think between the two should be the race. I see Vetona and Xay Xay as the greatest rivals.

In fifth place, the Urquijo Grand Prix (sponsored by Aquanima) will be held, bringing together the best sprinters of our Turf. Eight contenders for victory over the distance of 1,100 meters in a straight line. It was a joy to see Great Prospector back after a year away from the track, but it was even more of a joy to see him win as he did. Last year he could not run, he is the one who most deserves to hang the crown. Kitty Marion is also good and a great distance specialist. She will be her main rival, it will be a nice duel. Speak in Colours, Stoweman and Alnasherat, will also do a great job.

The sixth race will be the Premier Galop Prize, for three-year-old colts and fillies that have not won €18,000 in Prizes. Nine participants, 2,100 meters of travel. Arenas de San Pedro is racing in progress, he lacked a neck to win in his last performance, he has everything to get his first victory of the year. Something more was expected from Tiger Bash in his previous career, but for values ​​he has a lot to say. He will be his main rival. Vicking City debuts in Spain, is a double winner in France and here he has the role of him. Six Rivers has left some detail to think that he could have a good option here, and even though he comes from running the Derby and could accuse him, I think he will do very well.

The day will close in seventh place, the Terre de France Award, a reference handicap, for horses and mares three years and older, over the distance of 2,400 meters. Six candidates for victory, under the orders of the Start Judge. The lot has many cracks. Aretha has a good chance to make up for her last miss after eight starts. Lady Red Moon comes from winning showing form and she is also a winner in fiber, but she can come a long way, anyway, I think she can repeat. Ace of Pentacles is not running well, but she really likes the Madrid arena and does the distance very well, as well as the fight. Between the three should be the race.

The broadcast of the horse races of the Hippodrome of Madrid can be enjoyed on Movistar. The LAS CARRERAS program is broadcast exclusively through the Deportes por M channels (dial 53 and its multis).

In the enclosure there are more than 2,000 free parking spaces, and also free buses leaving from 10:30 a.m. every 20 minutes as a shuttle from Paseo Moret in Moncloa. (If events in the capital do not allow departure from that point, it is moved to Avda. de la Complutense, in front of the Ciudad Universitaria metro).

1 The mockery of the shirts: this is how the designs... 2 Europe's central banks will raise rates July... 3 Record-breaking 100 Pounds average cost to fill up... 4 Mónica Oltra, on the request for imputation of the... 5 Greece: An appeal court reverses Iran tanker seizure... 6 The Generalitat will not prioritize Catalan in selectivity 7 Hidraqua and the UA promote a series of conferences... 8 Intellectually disabled people will do internships... 9 Cases of monkeypox in Madrid rise to 275 after adding... 10 The Diputación de Salamanca promotes the Camino de... 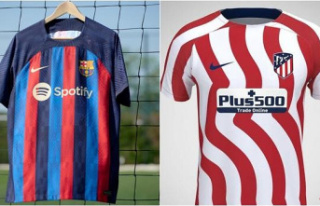 The mockery of the shirts: this is how the designs...