"Essentia" and "Stella" leaders in the first day of Sanxenxo

Great first day of regattas in the waters of Sanxenxo. 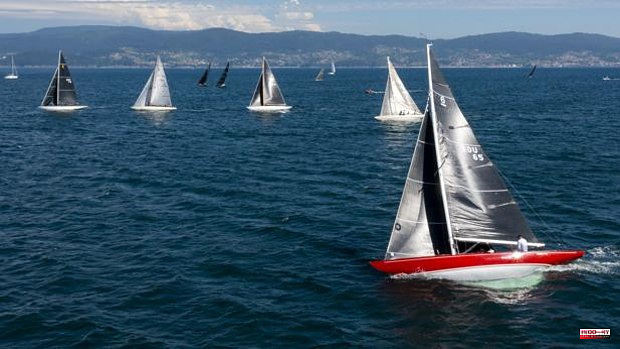 Great first day of regattas in the waters of Sanxenxo. The seventh edition of the Rey Juan Carlos El Corte Inglés Master Regatta released moorings this Friday in Sanxenxo with very good wind conditions and completing the first two tests of its program. The Romanian team skippered by Catalin Trandafir, Essentia, and Violeta Álvarez's Stella are the first leaders of the general classification.

The parts were not wrong. As the forecasts indicated, the first day of regattas in the Pontevedra estuary has been marked by northerly component winds that exceeded 15 knots of intensity, which finally caused the regatta committee to choose to set up the course inside of the estuary to avoid the harsh conditions of the area located in the Ons area.

Thus, with the starting line located towards the center of the estuary, at the height of Bueu, and with the windward buoy in front of Sanxenxo, the 40 teams participating in the event heard the first starting horn at 3:00 p.m. .

The first test of the day started very tight for the Classics, with Mauricio Sánchez-Bella's Titia, Miguel Lago's Alibaba II and Louis Heckly's Frenchman Dix Août escaping from the rest of the fleet and fighting a battle that ended with the team de Heckly claiming the first partial victory of the regatta. Behind, the second place was taken by the Alibaba II and third was finally the Titia.

In the second test, however, the Romanian Essentia was unrivaled and was the fastest of the fleet, winning handily after having scored a fourth in the first moto. The team commanded by Catalin Trandafir, which opens this weekend in Galician waters and has the Olympic medalist Hugo Rocha among its ranks, was followed in second position by the Bribon 500 owned by the owner José Cusí and the Finnish Astrée III owned by Ossi Paija in the third place.

With these results, the first day of competition ends with a general led by Essentia (4-1), followed by Dix Août (1-5) and Bribon 500 (6-2) in the second and third place on the provisional podium. respectively.

“The truth is that the conditions have been fantastic for us”, began by explaining Hugo Rocha (Essentia). "Today we have achieved very good results and our objective for the moment is to get to know each other well, grow as a crew and continue testing the boat and all the material, since we have only been sailing together on this boat for a short time yet".

The Open fleet, for its part, made its debut in the Rey Juan Carlos El Corte Inglés Master Regatta, demonstrating once again the high level of the teams, with several crews fighting for the top positions in the table. Dieter Schoen's Momo was the one who took the first victory of the day ahead of the Stella of the owner Violeta Álvarez, who was second with Juan Debén at the controls, and the American Jane Ann skippered by Karl-Gustav Pihl, who sealed a third .

Already in the second round the tables turned and the victory went to the British Battlecry of Jeremy Thorp, who had signed a ninth in the first race. Behind, the second place went to the Portuguese team of John Harald Orneberg, the Scoundrel One, and the Stella finished third, which was the most regular of the fleet on this first day of competition.

With a total of five points and three ahead of their pursuer, Stella (2-3) becomes the first leader of the table ahead of Scoundrel One (6-2) and Battlecry (9-1), second and third provisionally.

David Madrazo, crew member of the Stella, explained at the end of the day that “the regatta field has been quite complicated, very changeable, but little by little we have been able to be in the top positions. These wind conditions have also been good for us and the truth is that on days like today, regularity is what ends up making the difference”.

Tomorrow, Saturday, starting at 1:00 p.m., the regatta committee will give the first honk for the second day of competition of the 7th Rey Juan Carlos El Corte Inglés Master Regatta. The 6-meter fleet will be joined by students from the National Center for Adapted Sailing, who, like every year, will compete in the vicinity of the Real Club Náutico de Sanxenxo.

1 Provisional prison without bail for the alleged perpetrator... 2 WTO seeks trade agreements with its fate at stake 3 Last kisses and war guilt: Kyiv's deceptive calm... 4 PAU 2022: controversy over math exams in the Selectividad... 5 The Strokes and Lorde top the most massive Primavera... 6 Outrage in Mexican bullfighting: "They are taking... 7 They find the missing man dead in the Alicante town... 8 They arrest in Calpe a criminal specialized in robbing... 9 Arrested for selling thirteen types of drugs in the... 10 They arrest a man for committing twelve robberies... 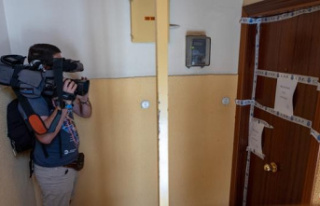 Provisional prison without bail for the alleged perpetrator...