Seville receives Spain in a half Villamarín. 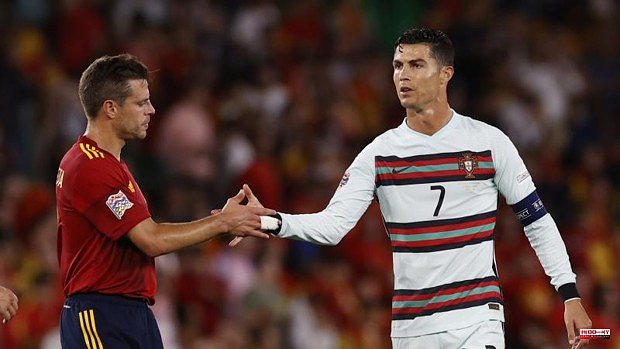 Seville receives Spain in a half Villamarín. It is felt that the visit of the selection also catches the fans out of hand. The official figure speaks of 41,236 spectators, but a quick glance shows the prick of the call. Only the backgrounds manage to achieve a decent appearance, while the grandstand and the side start the game with many empty seats despite the spirited presence of a good number of Portuguese. He misses the Sevillian fans, especially the Betic, the presence in the selection of one of his own. Gavi is not enough for them, despite the fact that the Barça player's participation is worth two or three.

Luis Enrique does not rest, who is hoarse as always.

Even more so seeing the decayed tone with which the duel starts. The coach is beginning to be predictable not only in his calls, where there are fewer and fewer loopholes for surprises, but also in his starting elevens, no matter how much this long window invites to dose efforts. Still, he always has an ace up his sleeve. This time it was Diego Llorente, a central defender whose presence in the national team fluctuates depending on injuries, his own and those of others, and who on this occasion had to join the Las Rozas concentration in the second instance by Aymeric Laporte. He suddenly found himself in the starting eleven against Portugal.

The Portuguese coach, Fernando Santos, also kept a knock. Cristiano Ronaldo's bench was not in the previous script of the game. But there was the Portuguese star, ultra-tanned, with a hoop earring in his ear and looking out of the corner of his eye at the headlines while he performed a rondo next to the center circle with the rest of the Portuguese substitutes. The last time Santos decided to do without Cristiano in his eleven was in a match against Andorra, in November 2020.

Boasted loudly from the warm-up, in a visceral hatred that dates back to the Portuguese's time at Real Madrid, Cristiano appeared on the pitch with half an hour to go to be the icing on the cake of a match that was born much hotter in The second half. At the age of 37, there is more talk about his footballing decline than about his goals, even though his worst season in the last decade, also on a personal level, has closed it with more than 30 goals, adding those achieved at his club and in the selection. In Seville, however, he seemed to want to agree with those who claim that his time has passed. Inconsequential, even in the Portuguese goal.

The Villamarín match, on the other hand, strengthens Álvaro Morata, who is still determined to throw the eternal debate of the nine to the ground and who restores Luis Enrique's confidence with decisive goals. The man from Madrid, who already scored two goals against Iceland in March, was also the scorer against Sweden last November, which qualified Spain directly for the World Cup. With Spain he already has 26 goals. He equals Emilio Butragueño and is just one goal behind Fernando Morientes' historic sixth place.

Morata finds happiness in the national team at a time when his future is again compromised, since neither Atlético, holder of his contract, nor Juventus, where he has played on loan in the last two seasons, seem to have him for next season . "My future? When it's not up to me, I can't do anything. I have to stay focused here and we'll see », he said as soon as he finished. Thus, Morata is a player in permanent vindication, a particular forward that only Luis Enrique seems to measure by something more than simple statistics. The player appreciates it and always finds a way to shine with the red shirt. The hug between the coach and the striker upon leaving revealed, once again, the unbeatable harmony between the two.

1 Benefits of Playing Online Casino Games During the... 2 The best cocktail shaker in Spain: «The only limit... 3 «Iceta has preferred to look the other way with the... 4 Lorenzo Silva reveals the most dangerous special operations... 5 The PP affirms that the alleged corruption of the... 6 Justice rejects the appeal of residents of Chamberí... 7 Ayuso carries out the controversial VTC Law with concessions... 8 Casper Ruud, between golf and tradition 9 Moyà: "Don't expect me to be playing with... 10 Indie reconquers a massive and thirsty Primavera Sound Benefits of Playing Online Casino Games During the...