Caruana against Nepo, the United States against Russia: the board war cools down in Madrid 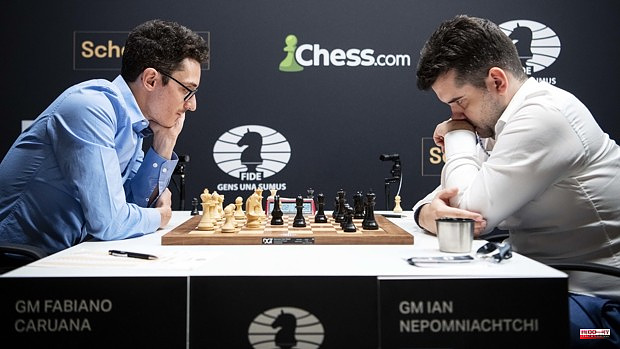 United States against Russia. Fabiano Caruana vs. Ian Nepomniachtchi. 29 years against 31, the best age in many sports, also in chess. It was the most decisive confrontation – the data is pending confirmation – in world chess in 2022. The fight ended in a draw with a disappointing flavor, but at least not everything is decided. There are five rounds left and the Russian is one point ahead of the American. He then admitted that he had a hard time during the game. He could not remember all the preparation and, in a very complex line, he did what is expected of a great teacher: «I had to think for myself in an unpleasant position».

In a world at war, boards are always a trench of strategic importance.

Henry Kissinger knew this when he 'ordered' Bobby Fischer to fly to Reykjavik to defeat the Russians. What happened years later is better not to remember. The only two grandmasters present in Madrid who have already won the Candidates tournament fought each other this Monday with the fixed idea of ​​repeating their victory.

The big prize in the Candidates tournament is not financial, at least in the short term. The winner above all gets the right to challenge the world champion, Magnus Carlsen, who watches the games with some superiority from his throne. We'll see if he later decides to retire and give up the title, tired of seeing the same faces. From a distance it seems that he said it as a bluff or a heater. His dolphin, Alireza Fioruza, did not do well to be singled out as his successor and was in last place, although today he achieved his first victory, perhaps freed from the pressure.

The Russian is still in the lead, with a one-point advantage over the American, who was in favor of being the general of the white pieces. Caruana had just suffered his first defeat at the Palacio de Santoña, precisely against his compatriot Hikaru Nakamura, who after doing the 'dirty work' lost against another player who did not know victory. Farewell to his chances, except for a miraculous turnaround in the standings. The Azerbaijani Teimour Radjabov, who had not won a classical chess game for three years (two of them during the pandemic), won with great style. He deserves it if only for attitude and sportsmanship. Nakamura had said that he loses money by coming to Madrid. It's already definitely true, because he won't be the next title contender. If they gave points for making heads, he would be the absolute leader of the tournament.

Nepomniachtchi, the antihero, again used the Russian defense. It would have been nice if Caruana had used the American attack, but there is no such thing in chess nomenclature. In any case, the Miami-born boy came away convinced that he could win. On move 11 he introduced the unusual move, a well-prepared surprise that did indeed catch the Briansk-born grandmaster off guard. Or so it seemed, because in chess there are also bluffs.

On the other hand, Nepo plays as if in a trance, with a confidence that seemed to have been stolen from him by Carlsen in the last World Championship final, where the Russian was thrashed. In the Palacio de Santoña he moves like he doesn't step on the ground, and that his critics assure that he has a few kilos left over to be in the elite. Wrong or not, that's what they say.

During a long phase of the game, Caruana made all the moves that the computers recommended, although he was getting into a path that seemed too dangerous, like when the car's navigator insists on taking you through places that are not recommended. Fabiano made several strange decisions. In other times, before the computer explosion, commentators would have criticized them without hesitation.

At the critical moment, the American made the second-best move, enough for the board to experience a stampede of pieces. It is what he has to calculate like a machine, that as soon as you stop following his recommendations you are left with the stupid face of a skinny guy. That inaccuracy, which wasn't even a mistake, was enough for bishops, knights and rooks to launch into the box as if the squares were on fire. The field of play was left as a lot. Nepo breathed a sigh of relief because he knew, as he later confirmed, that the worst was over.

Suddenly, what seemed like an exciting fight turned into an endgame with the same number of pieces for both sides, symmetrical pawn positions and no weaknesses. The fire left no smoke, but a stink of boards that pulled back. We hadn't even played 30 moves and the fate of the game seemed decided. Nepo takes another step towards the goal with a point advantage over his pursuer, with five games to go.

It may seem like a failure, but Caruana bordered on disaster, despite his theoretical superiority. Accepting the draw was better than launching a suicide attack when the conditions were not met. There is a lot of fabric left to cut in the Palacio de Santoña.

The third in discord, Nakamura, was almost always worse against one of the bottom, Radjabov. He lived on the edge of the abyss and ended up falling off the cliff, thus throwing away everything he had won the day before against Caruana.

Alireza Firouzja and Richard Rapport exchanged serious mistakes, which the journalists and the public could scoff at, very proudly, because we see the games aided by computer programs. Nor was Diego Simeone's position reached in any game with his son, but the Hungarian played the father and ended up losing to the Frenchman of Iranian origin, the youngest in the tournament. Firouzja could be decisive in the remainder of the championship.

Ding Liren and Jan-Krzysztof Duda, finally, changed material in a 'neo-Catalan'. Suddenly, Ding Liren was left with two extra pawns. In the silicon gods' assessment, evenness was still on the board, but any mortal would have chosen the side with the most wood in action. Then one of the pawns fell and the path to the draw seemed clear. We will see if the result is confirmed.

1 The Diputación asks for a Faculty of Medicine for... 2 «Alejandro was always a child, in his ID he continues... 3 The new Gran Montecelo Hospital in Pontevedra will... 4 The new Minister of Education of Ximo Puig promises... 5 In July, the bill in favor of the victims of terrorism... 6 A judge cites the head of Puigdemont's office... 7 The PSOE expels five of its eight representatives... 8 Rudy Giuliani, Trump's lawyer, is attacked in... 9 At least ten dead and more than 250 injured by a toxic... 10 Tiptoeing through the NATO Summit: The black olive,... 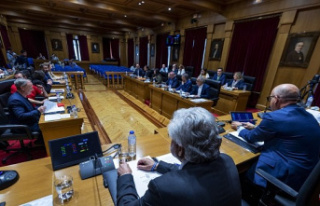 The Diputación asks for a Faculty of Medicine for...