Pecco Bagnaia achieved pole position in Assen, his fourth of the season and the second in a row, after beating the good times of Fabio Quartararo and Jorge Martín, who will complete the front row. 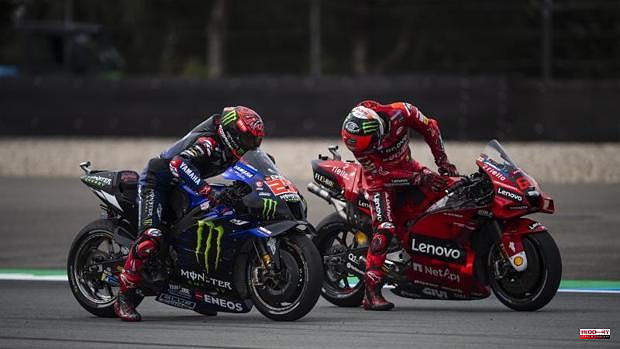 Pecco Bagnaia achieved pole position in Assen, his fourth of the season and the second in a row, after beating the good times of Fabio Quartararo and Jorge Martín, who will complete the front row. Q2 did not favor Aleix Espargaró, who was much better in free practice over the weekend. The Aprilia rider will start on the second row, behind Bezzecchi, who was fourth, and behind Jack Miller, who was sixth. Alex Rins is overcoming his wrist problems and will start in ninth position, behind Zarco and Oliveira, while Viñales finished in eleventh place. Problems continue for Honda. Nakagami, the only one on the golden wing who got into Q2, finished last.

“We are riding very fast and I am happy to be fighting for pole position again. We will see in the race but Bagnaia and Quartararo are very strong”, explained Jorge Martín.

Saturday started badly for Pol Espargaró, who decided to withdraw and not compete in the Dutch Grand Prix as he did not feel 100% physically due to the discomfort he suffered from the crash he suffered at the German Sachsenring circuit a few days ago. "I'm in a lot of pain and finally I haven't been able to get a good result. I didn't expect to feel so bad », he explained after finishing eighteenth in Friday's combined. Therefore, he has decided not to continue this weekend and recover from the discomfort, as announced by his team. «Since he suffered his fall in the first free practice of the German GP, ​​Pol Espargaró has done everything possible to recover and be in shape for the eleventh round of the MotoGP World Championship in the Netherlands. After the second free practice sessions yesterday, Friday, Espargaró continued to have intense pain and discomfort in his ribs. Pol feels that he is not capable of competing on a MotoGP bike and together with the Repsol Honda team, they have made the decision not to compete in the Dutch GP”. The driver is expected to return one hundred percent for the British Grand Prix right after the holiday break.

Aleix Espargaró completed some excellent practices setting the best time in the third free practice despite suffering a minor crash, which allowed him to get into Q2 directly together with another of the favorites to win in Assen: Fabio Quartararo. Good news also for Rins, who despite his wrist problems also entered the last qualifying round directly. Viñales, Nakagami, Bezzecchi, Bagnaia, Miller, Jorge Martín and Zarco completed the list of ten fastest drivers before playing for the final position on the grid. Bastianini, Alex Márquez, Morbidelli, Marini, Oliveira, Mir, Bradl, Di Giannantonio, Brad Binder, Darryn Binder Gardner, Dovizioso and Savadori looked to fight for the two playoff spots. In FP4, it was Quartararo who proved intractable, followed by Francesco Bagnaia and Jack Miller, in a session in which the defending world champion completed a large number of laps at a very high pace, culminating in a final lap in which has dropped to 1'32.478.

Surprise for the KTMs, who put their two riders in the final round. Brad Binder and Oliveira made it through the cut, favored in a certain way by Bastianini's bad luck, with problems on both of his bikes and by a crash by Joan Mir, who ruined his pass when the Suzuki rider thought he could be in the Q2.

Jorge Martín started very strongly, setting a time of 1:31.708 on his first lap, beating the circuit record and positioning himself to achieve pole position. The Pramac Racing rider knows that he is risking his future at the height of the market and he takes each Grand Prix as a showcase to get a good seat next season. Aleix Espargaró had not quite found the rhythm shown in free practice and with five minutes to go he was at the meridian of the group, condemned to start second row. As usually happens in this sport, in the last three laps is when everything is decided and, of course, the classification began to move. Pecco Bagnaia was placed first in the provisional just before a crash by Jorge Martín and another by Jack Miller caused yellow flags that prevented everyone from improving times. In the end, Quartararo was one tenth off the pole and Aleix finished fifth.

1 This will be the new flags for colorblind people on... 2 Castilla-La Mancha registers two new cases of monkeypox... 3 A 15-year-old boy, about to strangle himself with... 4 They ask for five years in prison for an Imam who... 5 They rescue a 13-year-old boy who had fallen with... 6 A 45-year-old motorcyclist dies after having an accident... 7 The Community of Madrid responds to the transport... 8 A peaceful demonstration reminds the G-7 of its commitment... 9 They invest 300,000 euros in the new Olías del Rey... 10 A demonstration in Valladolid cries out against the... 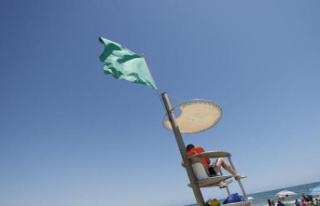 This will be the new flags for colorblind people on...