He does not usually keep quiet about what he thinks and when he considers that an injustice has occurred, he does not hesitate to denounce it. 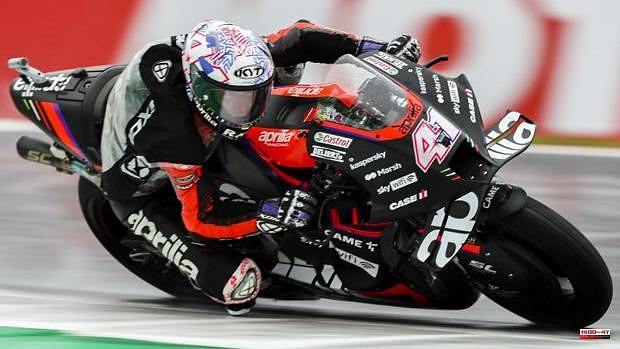 He does not usually keep quiet about what he thinks and when he considers that an injustice has occurred, he does not hesitate to denounce it. This is what happened this Friday in Assen, on a day marked by rain. Aleix Espargaró was very critical of the Race Direction for not stopping the first free practice and harshly attacked the stewards for their criteria when imposing sanctions. Curiously, the Catalan was punished at the end of the first round because in his last outing his Aprilia had the 'spoiler', the bucket, with smooth tires at the front and rear and can only be used with water. The pilot had all his laps cancelled, so he was left out of the top ten.

«It gives me the feeling that, sometimes, we leave the red flags at home. I stopped in the pits, and I told my team: 'When it stops raining, I'll come out because I don't want to kill myself'. On the straight, the bike couldn't go above 14,000 rpm, otherwise it skidded. The entire back straight, aquaplaning, at the entrance of turn 8, at turn 1 the same. I don't know. Since I can't decide, I stand in the box and wait. I came out at the end, there was a lot of water, but you could go », he began explaining.

«There are times when it surprises me a lot and pisses me off. The first free practice was a bit surreal, but since I can't decide, I'll stop. The race, to be able to make it clear that it could be done until there is a misfortune. For me, with the conditions of the first free practice it was not possible to run, impossible. I hope everyone does their job well, I don't think it will be that difficult. When the bikes do aquaplaning, you can do two things: either put a red flag or leave the bike and take a boat. I'm not very surprised. The Race Direction said in Germany that Morbidelli was not penalized because he then did another fast lap and entered directly, that nothing happened. That lap was the track record. I came two tenths below. I would not have mounted the second tire, I would have stayed in the box, as I did in Barcelona. But there was no penalty. Well, one more”, lamented the Aprilia rider.

Aleix insisted: «For me, it is a lost war. I don't want to get pissed off anymore. Does not matter. Today there was a meeting of the manufacturers and the factories were all in agreement. I can't do more. It's sterile." And he was understanding with Carmelo Ezpeleta, who asked that the Race Direction not be criticized: «From his point of view, I understand that he should not be criticized. And, aside, all the 'cracks' that there have been by many riders and there has been no reaction, no improvement. I'm not going to get pissed off anymore. The Morbidelli thing seemed incredible to me. And the Zarco thing: Miller had been improving, Zarco bothered him the whole lap, he passed without improving and they said nothing, that since Miller had also passed, well, he was not sanctioned. Mine with Morbidelli, the same. I got through to Q2, but I had to risk my mustache when I would have saved a tire and in qualifying I would have had three, or a new one in the warm up or whatever. And I would have the German track record, which is silly, but it would be mine and not Pecco's. It is punished when you want. I do not understand very well".

Despite his indignation, Aleix was satisfied with his feelings in Assen: «Good, more or less on the spot. It has been a day, a priori, not very productive, but, in reality, it has left me happy because in the morning I have been competitive in the water and, above all, for the races that come after the summer break, it is always important to be fast in water. That has satisfied me. In the afternoon, we had a problem with the bike, which didn't start until six minutes to go. I was able to do only three or four laps and, despite this, I finished second in almost the same time as last year's fastest lap. It was a fuel pump connector problem. Tanks had to be changed and it took us eight minutes and I hardly expected to be so fast”.

1 Poor Spanish participation in the Mediterranean Games 2 The sons of Scottie Pippen and Shaquille O'Neal,... 3 FINA does not allow Anita Álvarez to compete in the... 4 The war continues over the failed bid for the 2030... 5 Cilic, Auger-Aliassime and Tsitsipas, on the way from... 6 This is how inflation affects the Formula 1 World... 7 "The atmosphere at Real Madrid is neither professional... 8 Paolo Banchero, Italian surprise for number one in... 9 The collection of a Spanish champion to be able to... 10 Alcaraz, with little margin against Wimbledon 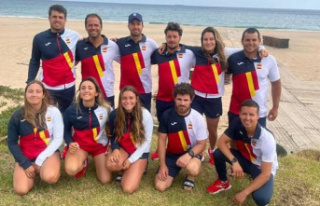