The final picture of the football World Cup in Qatar, which Germany was cursed from start to finish, showed the shocked DFB entourage fleeing the dusty desert. 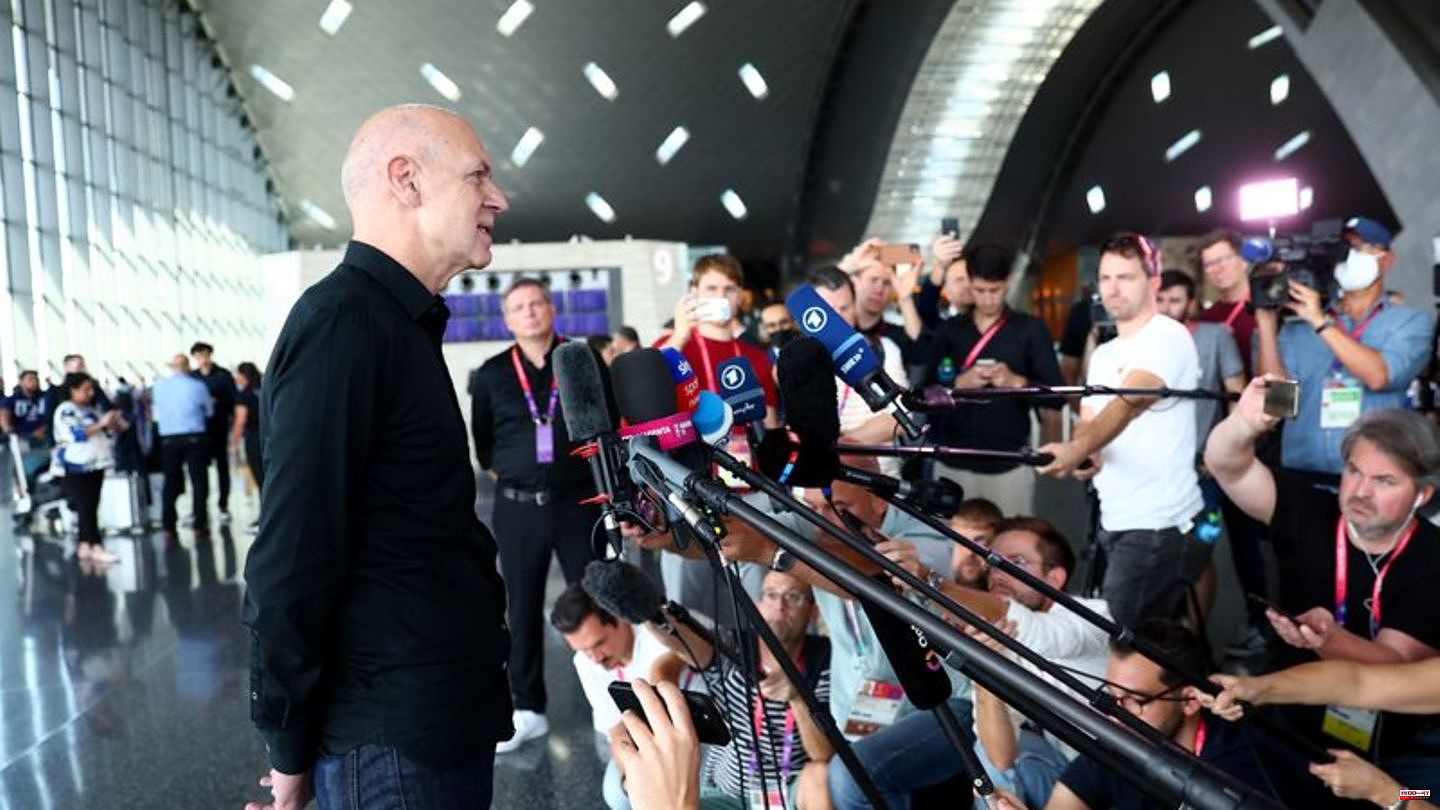 The final picture of the football World Cup in Qatar, which Germany was cursed from start to finish, showed the shocked DFB entourage fleeing the dusty desert. In the sterile atmosphere of the airport, the waiting association president tried to be objective and patient.

Hansi Flick, Oliver Bierhoff and the other big World Cup losers were sitting in the bus on their way out of their quarters bubble in the north of the Emirates when Bernd Neuendorf, after the national team had been eliminated from the next preliminary round, discussed how to proceed at an improvised media event at Hamad International Airport sketched.

No activism, no expulsion, no hasty shots - that was the message from the DFB boss. Neuendorf, who had only been in office for almost nine months, had developed a "timetable" the night after the next German preliminary round disaster, an "orderly procedure", as he calls it. First measure: for the coming week he convened a first crisis meeting. Participants: national coach Flick, national team director Bierhoff, DFB vice president and DFL supervisory board chairman Hans-Joachim Watzke, better known to fans as the boss of Borussia Dortmund, and to him as the association boss.

"My expectation of the sporting management is that they carry out an initial analysis at this meeting, a sporting analysis of this tournament. But that they also develop perspectives for the time after the tournament with a view to the European Championships in their own country," said Neuendorf , having just checked in for special flight LH343. This brought the majority of the DFB entourage to Frankfurt via Munich after the useless 4-2 win over Costa Rica on Friday afternoon. "I feel medium," said Thomas Müller upon his arrival in Bavaria on Friday evening. His colleagues initially preferred to remain silent in Munich on the way out of the airport.

The analysis must also include "the development of the national team, our football since 2018, since the last World Cup," emphasized Neuendorf. This means that the long-term manager Bierhoff, who has been responsible for 18 years, is much more in the spotlight than Flick, who replaced Joachim Löw as national coach only 15 months ago.

The boss has to clean up now

"Leaving the tournament hurts tremendously," said Neuendorf. Means: title expectations not met, not even minimum goals. The boss has to clean up now. Neuendorf also announced that it did not want to issue "no water level reports". Only after the internal discussion and analysis process does he want to announce "a result". time open. "Please take the first step before the second," said Neuendorf.

A fatal "keep it up" like in 2018 with Löw and Bierhoff can be ruled out according to dpa information. Flick also does not get a free pass as head coach towards the home European Championship in 2024. Both Flick and Bierhoff had declared in the first moment of shock of the next tournament disaster that they wanted to continue their work, the EURO should be their next goal in 18 months. Both have contracts with the DFB until the summer of 2024.

Is the? Four years after the historic group knockout In Kazan, Russia, the imposing Bedouin tent stadium in Al-Khour stands for the next low point in German football. And that only a year and a half before the European Championships in their own country. A summer fairy tale reloaded 2024 - who wants to believe in that at the moment? Jürgen Klinsmann, the builder of the exhilarating summer of 2006 World Cup with the young fan favorites "Poldi" and "Schweini" and a German team that was celebrated like a world champion for third place, said as a connoisseur of the scene first "very, very rough "Advent days ahead.

The performance was not right in Qatar

The 1990 world champion predicted a media "hurricane" would come up. Flick and Bierhoff are in the eye of the storm and directly behind them are a number of players who have failed again. "The last greed, this bit dirty - we miss that," said defense chief Antonio Rüdiger. Did he also mean himself? Joshua Kimmich, the leader and icon of the supposedly golden generation of 1995/96, was visibly touched, demoralized and almost disillusioned in the stadium's interview zone well after midnight.

With tears in his eyes, the 27-year-old spoke of the "most difficult day of my career" and the "fear of really falling into a hole". The ambitious professional, who has clinched victories and titles at all club levels with FC Bayern and is used to it, didn't sugarcoat anything. "Especially when you look back: 2018 was a flop. Last year's EURO blew up." And now the 2022 World Cup. He no longer wanted to speak of "bad luck", but of "a lot of inability".

The reflex, the evasion, pointing the finger at the Spaniards because their own wild 4:2 win against Costa Rica, which was not even close to winning the title, wasn't enough because they lost to Japan - by the way, 1:2, like the DFB- Selection at the start of the tournament too - was collectively avoided. "I don't think it's our place to blame Spain," said Kimmich. Your own performance was not right in Qatar: from dealing with the One-Love bandage, the self-chosen withdrawal of a World Cup feeling in the secluded stronghold of Al-Ruwais, to the focused performance on the pitch over 90 minutes.

As an ARD expert, ex-captain and Rio hero Bastian Schweinsteiger missed the "burning" in the German team. The word of the evening was "anger". Anger at yourself. And incomprehension about your own failure. Flick, the admired title collector with FC Bayern, disenchanted himself on his tournament debut as national coach. But he doesn't want to give up. "I enjoy it. We have a good team," he said.

The 57-year-old fell far short of his goal of winning the title and leading the national team "back to the top of the world". Flick announced for himself a "very, very quick" work-up. "I'm always someone who is very critical." He made himself vulnerable with the design of the short preparation, the stubborn adherence to Thomas Müller, lazy compromises in line-ups, conversions and changes. Little fit. To explain the Japan false start as the sticking point for the missed round of 16 would also be too cheap. Argentina started similarly, losing 2-1 to Saudi Arabia. But then, under extreme pressure, Lionel Messi and teammates corrected the false start with two wins. The DFB team only brought its quality to the pitch sporadically.

There were no immediate resignations

A break is needed. Also a rethink. There were no resignations immediately, even if Müller (33) said goodbye to the fans via television, but then announced that he would first consult his wife Lisa and want to speak to Flick. Even captain Neuer (36) wants to continue "as long as I'm invited and show my performance".

Hope for the future is best embodied by Jamal Musiala, with whom Flick suffered: "It's really a shame that a player like that can't play anymore (at the World Cup)." The 19-year-old was the bright spot in the German gloom in Qatar. Likewise Niclas Füllkrug, the top joker, a down-to-earth guy. An exotic in the DFB orbit. The fans want more of this.

Flick refused to deny his World Cup squad the potential. "We have players who play for top clubs. We have quality." He couldn't lift her. Rudi Völler resigned as a fan favorite after the EM preliminary round in 2004, two years after the sensational World Cup finals in Japan and South Korea, because he considered the mortgage to be too big, a spirit of optimism before the World Cup in his own country to kindle.

At that time, Klinsmann took over as a great revolutionary, who turned the association and team inside out. It was also he who invented the post of team manager. Bierhoff has practiced it ever since, meanwhile in the powerful rank of national team director. The 54-year-old ruled out personal consequences. "I have a very good feeling about myself," he said on Friday night with a pale face. "Unfortunately I don't have any arguments with three bad tournaments to counter that," he said. Is he perhaps paving the way for a new beginning?

World Cup preliminary round 2018, European Championship round of 16 2021, World Cup preliminary round 2022 - the proud football nation of Germany, decorated with four World Cup titles and three European Championship trophies, has finally lost the tournament team seal of approval. A cycle ended in Al-Khour. Bierhoff's tournament era began with a 4-2 win over Costa Rica in the 2006 World Cup opening game. Will it also end with a 4-2 win against Costa Rica 18 years later?

The opening game of the European Championship will take place again on June 14, 2024 in Munich's Allianz Arena. With flick? With Neuer, Kimmich, Musiala? Who knows. First of all, Neuendorf has to show the way to the dreary future. The next international matches will not be played until March. Not only opponents and venues are open. 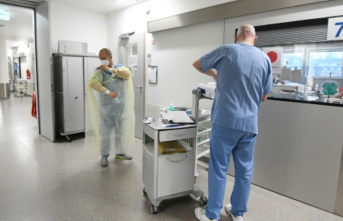