Eden Hazard admits: I was too bold

"It is true. I can't hide." How to match the Real Madrid star Edern Hazard to the issue of whether he started the season with several kilos in excess. he How to match the Real Madrid star Edern Hazard to the issue of whether he started the season with several kilos in excess.

he tells candidly in an interview with the French media L'after a slump.

Hazard, like Real Madrid used the button 750 million Danish kroner to download from the English Chelsea, has received massive criticism after the poor performance in the beginning of his time in Real Madrid. And so it helped, of course, that the belgian did not looked like a man who was fit and in shape.

"When I have vacation, so I have Pokerklas vacation. Otherwise, I have never," says Eden Hazard.

"I'm the kind of person who quickly takes on, but also loses me quickly again. When I was 18 years in Small, weighted, I 72 or 73 kilos. So I ended up at 75 pounds, because my muscle mass has increased since then. In the summer I couched 80 kilos, but I threw it all again in 10 days," assures the belgian midfielder.

Eden Hazard also explains in the interview that he think his form in Madrid is improving. The only thing he is missing to prepare, is his number.

so far it's just been a goal and four templates passes in 11 games in Real Madrid jersey. It stands in sharp contrast to the season 2018-2019, where it was for a total of 21 goals and 17 assists in 52 matches for Chelsea.

1 Mourinho aside from Eriksen in the first starting... 2 Mourinho bænker Eriksen in the debut 3 Injury during training keep Bendtner out of the Hobro... 4 Peter Skaarup will have the minister of justice response... 5 Panic and you ever make shopping mistakes on black... 6 Queue on the highway after the accident 7 EU-politician concedes hole in consumer protection... 8 American wonder: the Danes are tremendously busy with... 9 The kind of men scares me witless 10 Labour leader will be neutral at the new brexit vote 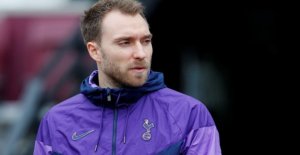 Mourinho aside from Eriksen in the first starting...