Overthrow plans: Reich citizen raids: "Absolutely right that the Office for the Protection of the Constitution is targeting the AfD"

After the major raid on a "Reich Citizens" group, the German security authorities are expecting further suspects and searches due to plans for a coup. 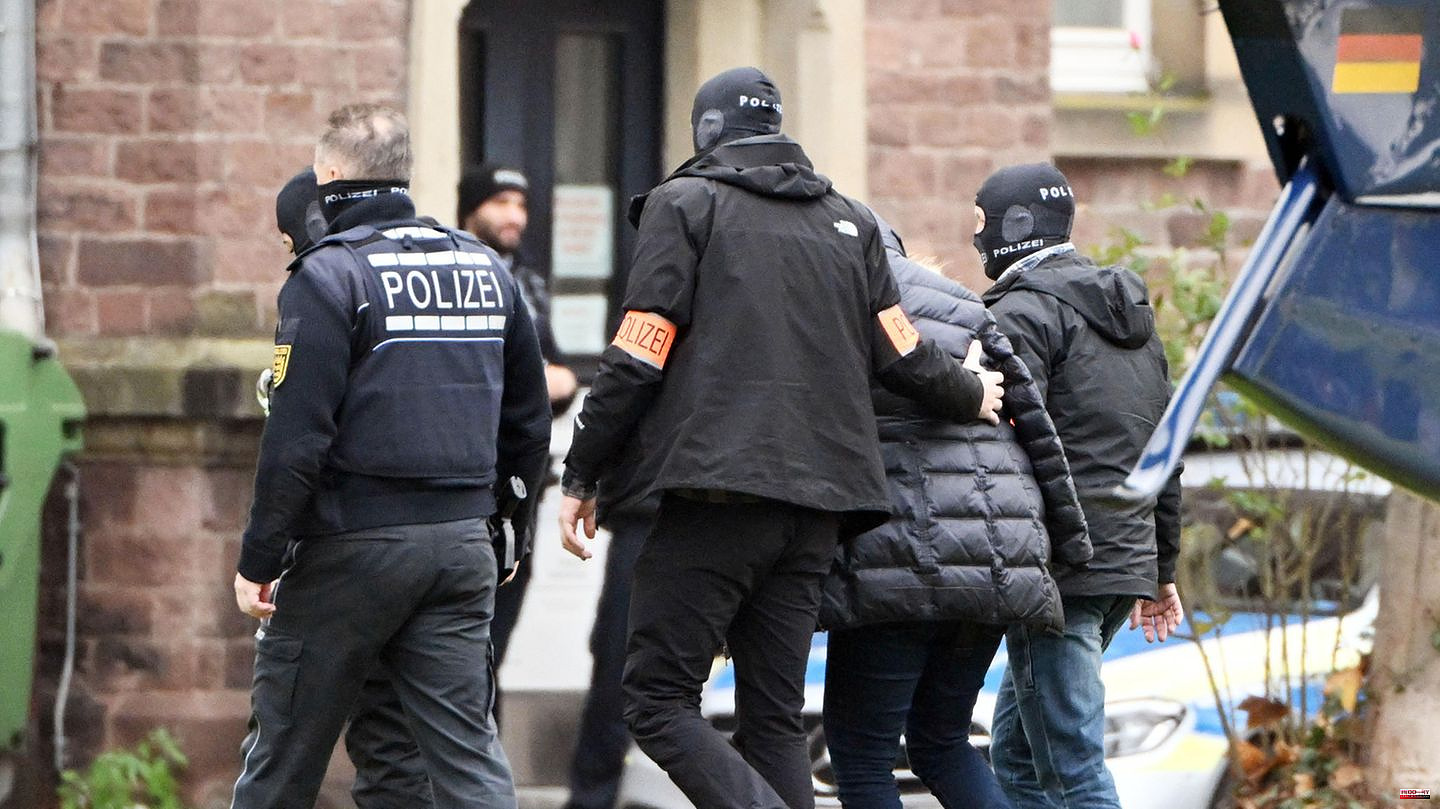 After the major raid on a "Reich Citizens" group, the German security authorities are expecting further suspects and searches due to plans for a coup. In interviews on Wednesday evening, the Presidents of the Office for the Protection of the Constitution and the Federal Criminal Police Office (BKA) as well as the Federal Public Prosecutor were convinced of the seriousness of the coup plans.

On Wednesday, the federal prosecutor had arrested a total of 25 people in eleven federal states as well as in Italy and Austria. She accuses 22 of them of being a member of a terrorist organization that wanted to overthrow the political system in Germany. The arrest warrants for 19 suspects were executed by the evening, so they are in custody. If there are more, this could happen on Thursday.

This is how the media in Germany and abroad comment on the raids:

"Hannoversche Allgemeine Zeitung": "Although it is encouraging that the police officers were able to arrest dozens of 'Reichsbürger' in a raid who had sought to overthrow the system, it is worrying that the group was able to form months ago without being disturbed. The agencies involved from the police to the Office for the Protection of the Constitution must be better equipped so that they can work faster and more efficiently. 'Reich citizens' will not stop up to mischief despite the raid."

"Neue Osnabrücker Zeitung": "Although the Reichsbürger scene is strange and small, it is dangerous. Anyone who rejects the state order is prepared to use violence to instigate a coup. In addition, the scene is growing and militant actions are increasing. Because since the Corona Pandemic, the Reich citizens have managed to close ranks with lateral thinkers and corona deniers, who also reject the state.It is worrying that last year alone, the spectrum of Reich citizens grew nationwide by 1,000 people to 21,000 members.Some act like terrorists: Only before a few Months ago, a group of Reich citizens called 'United Patriots' who wanted to kidnap Federal Minister of Health Karl Lauterbach and start a civil war was busted."

"Augsburger Allgemeine": "The trivialization of the so-called Reich citizens has always been wrong. In recent years they have proven several times that they follow their crude fantasies with action. Let's just remember the man from Bavaria who in 2016 killed a police officer at a Shot dead. The citizens of the Reich are not just crackpots who reject the state, make imaginary ID cards and annoy the authorities. The current case shows that very clearly. The terrorist organization that has now been exposed is the largest and most dangerous group of its kind to date."

"Stuttgarter Nachrichten": "It is a specter that the Attorney General is painting on the wall: alleged 'Reich citizens' have armed themselves, planned an attack on Parliament, even the overthrow, a civil war in Germany. A worn-out prince, the lonely representative of a Sex, which never had supra-regional importance, should become the new German head of state. It all sounds more like a robber's pistol than a coup. Caution is advised after the gigantic operation with more than 3000 police officers: Because it would not be the first time that investigations against the 'Reichsbürger' conspirators were sloppily conducted and collect too little evidence. Then they just chase after a few pathetic cranks with crude ideas with immense effort."

"Volksstimme": "Those who previously dismissed the so-called Reichsbürger as obscure muddleheads, but actually rather harmless troops, are now being taught the wrong thing. The large-scale operation by the authorities has uncovered a suspected right-wing extremist terrorist network, driven by violent subversion fantasies and conspiracy ideologies. This is extremely threatening. The state has proven to be defensive, as evidenced by the successful police raid. But now the brown swamp must be completely drained. This includes a detailed review of what happened. How far had the plans for the seizure of power progressed? How was the terrorist network, apparently unobserved, built up The fact that a former AfD member of the Bundestag apparently belongs to the terrorist group is further evidence of anti-constitutional and anti-democratic tendencies in the party. Absolutely correct that the Office for the Protection of the Constitution has the AfD in their sights."

"Kölner Stadt-Anzeiger": "Although it is encouraging that the police were able to arrest dozens of extremists in a raid who were striving to overthrow the system, it is worrying that the group was able to form unmolested. 'Reich citizens' are becoming 'Reich citizens' despite the raid don't stop up to mischief. They reject the legitimate state as we know it. Their twisted world view means that they have to fight for a new order. It's frightening that the ex-AfD member of the Bundestag Birgit Malsack- Winkemann is among those arrested who worked as a judge. People with such a world view should not be allowed to work in the public sector or in the military. The firewall against the right-wing must be raised."

"Reutlinger General-Anzeiger": "In an increasingly confusing world with its complex network of dependencies and interests, many people long for simple structures. A world in which one knows again who is good and who is bad. With freedom of thought and action that a democracy offers, many are simply overwhelmed.A mixture that anti-democratic elements are only too happy to use to sow the seeds of doubt in the hearts of the people.So it is hardly surprising that the self-proclaimed interim government under Henry XIII. Prince Reuss recognizes the Russian Federation as the sole negotiating partner for a new state order. Putin's trolls will laugh up their sleeves."

"NZZ", Switzerland: "Even if the excitement about the alleged Reichsbürger conspiracy that the security authorities have uncovered is great: An overthrow or civil war is certainly not imminent in Germany. The delusions of some sectarian diehards are for the overwhelming majority of Germans in In no way comprehensible The protection of the constitution counts around 21,000 people in the entire Reich citizen scene, which is 0.025 percent of the population.

However, there are points to worry about and questions to ask. Point one concerns the danger posed by radicalized members of extremist movements: terror is always possible. An open society, a democratically accessible government district, the transport and energy infrastructure for 83 million people cannot be permanently protected."

"La Vanguardia", Spain: "3000 police officers were deployed to break up a right-wing extremist conspiracy against the federal government. It is still too early to assess the goals of those involved and their chances of success. But it is already becoming apparent that we are facing a dangerous conspiracy. A conspiracy that comes as no surprise because it is part of the growing far-right movements in Europe and networks spreading conspiracy theories from the US and Russia-based poison networks. There are clues. Giorgia Meloni, admirer of Mussolini, rules in Italy The far-right Sweden Democrats became the second largest force in parliament Hungary and Poland have illiberal governments Marine Le Pen won the presidential election with 41 percent.

The followers of conspiracy theories have also lived among us for years. Some chew the nonsense of QAnon again, others are opponents of vaccination or deniers of the climate crisis. Germany and the EU must react without hesitation to those who attack its founding principles and prevent young, rather uninformed people from turning to anti-democratic forces."

"Bloomberg", USA: "With this raid, the Germans apparently thwarted plans for a full-blown coup. (...) The Weimar Republic survived several coup attempts before collapsing in 1933. The USA used to believe that they were immune to such incitement, until... they had to survive an attack on their Capitol on January 6th, 2021. (...) Yes, the danger is real. The lesson from Germany this week, as well as from the USA since January 6th, is that the crazies are becoming more radical and infect each other across borders with their conspiracy theories and fantasies of violence."

"Dagens Nyheter", Sweden: "Russia has a history of interfering in the governance of other countries and trying to overthrow governments. It is not known whether they would go so far as to get involved in plans for a coup in Germany What is certain is that the Kremlin has an interest in a weakened and pliable Germany at a time when the government in Berlin is turning away from previous conciliatory policies towards Russia and is beginning to reduce its dependence on Russian gas. The Russian embassy in Berlin has issued a statement denying any contact with German terrorist groups."

"Independent", Great Britain: "The Federal Republic will celebrate its 75th anniversary in 2024 - the longest uninterrupted period of liberal-democratic government in German history. But genocide, revolutions, wars and occupations were also part of German history - and still are in living memory Democracy, which was extended to the East after the fall of the Berlin Wall and reunification in 1990, is not a matter of course in the new Germany either.

The would-be revolutionaries may have been encouraged, if not inspired, by what they saw in Washington on January 6, 2021. The idea that the seat of power and key organs of the state can be seized by a few armed activists must be both alluring and intoxicating to them. It may also have reminded them of the way the Nazis in the 1920s also used direct action to attract attention, create martyrs, and destabilize the state." 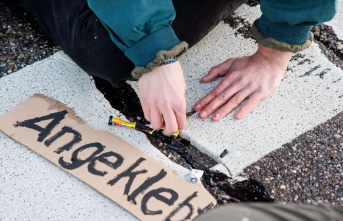