Notorious private army: Officially, the "Wagner" force does not even exist - and yet the mercenaries are suddenly in the Kremlin

It does not appear in any registers, is not listed in public databases, and officially it does not exist. 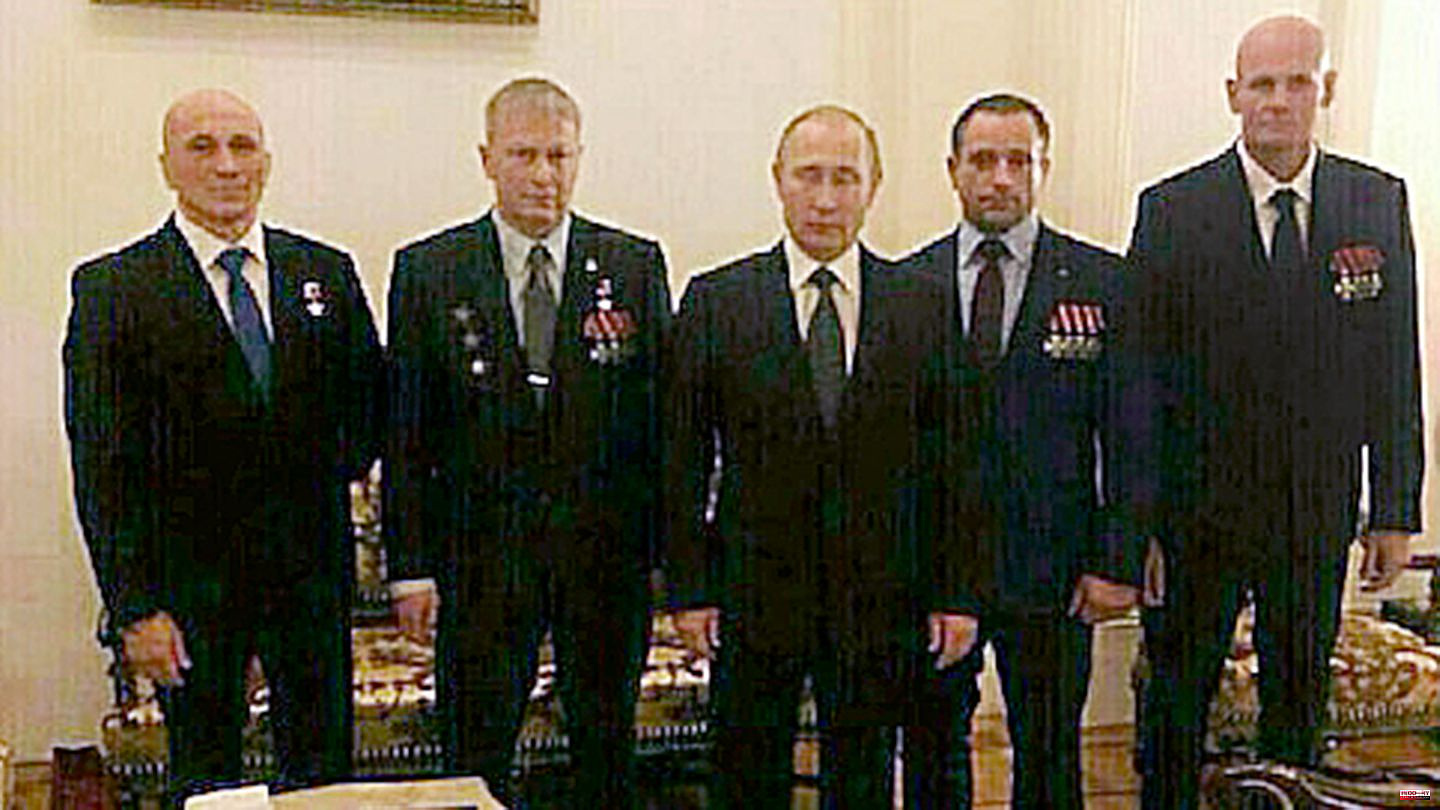 It does not appear in any registers, is not listed in public databases, and officially it does not exist. The "Wagner" force is one of the most secret units in Russia. The story of their commander is riddled with mysteries and mysteries. Dmitri Utkin is the name of the man who is said to have fought in both Donbass and Syria in recent years - for Putin.

Extensive research by the important independent Internet newspaper Gazeta.ru, the online newspaper Fontanka.ru, which is critical of the Kremlin, the business newspaper RBK and the Wall Street Journal, were able to bring some details of his biography to light: in 2013 he apparently retired from active military service. The former lieutenant colonel previously commanded a special unit of the GRU military intelligence service. Since leaving the Russian army, Utkin has hired himself out as a private mercenary. The 46-year-old has commanded his own unit since 2014, which has earned a memorable reputation under his nickname Wagner.

According to rumors, he was already involved in the annexation of Crimea. While there are still some doubts about this, the deployment of his mercenary force in eastern Ukraine is considered a certainty. Utkin is said to have maintained order there, especially in the ranks of the separatists, and eliminated uncomfortable leaders of the "wild militias". The mercenary with a fondness for the Third Reich is said to have swapped his usual equipment for a German Wehrmacht steel helmet.

When things finally started to get tight for the Syrian ruler Bashar al-Assad in autumn 2015, Utkin relocated his troops to Syria. It was probably his men who played a crucial role in the conquest of Palmyra. Dozens of his fighters have died in Syria. And although they do not belong to the Russian military, they were awarded medals.

Apparently, this honor was also bestowed upon Utkin.

Officially, however, the Kremlin wants nothing to do with the mercenaries. How? The existence of such a force in Russia is forbidden by law. Mercenary is illegal. According to current law, military units can only act for the Russian state. Up to seven years imprisonment is provided for participation in armed conflicts on foreign territories.

And yet, when the "Day of the Fatherland Heroes" was celebrated in the Kremlin last December, none other than Utkin was sitting in the ballroom. Ironically, the state television cameras caught the unusual guest on tape.

And there sat the mercenary leader -- in the midst of 300 people who "showed exceptional courage and heroism," as the Kremlin praised the highly decorated audience at the event, which aims to revisit Russia's pre-revolutionary traditions. Selected recipients of the country's highest orders: Heroes of the Soviet Union, Heroes of Russia, Cavaliers of the Order of Glory and Knights of the Order of St. George. Putin himself congratulated. "Each of you left your own bright page in the history of Russia," he applauded those present.

Utkin is obviously one of Putin's heroes. Journalists from the independent online newspaper Fontanka.ru identified him in the audience - with a medal on his chest.

The photo does not show which medal it is. But the occasion and the setting of the celebrations limit the possibilities. Finally, the banquet was held in honor of bearers of certain orders.

But where did Utkin get such a medal from? At the time of his retirement from the Russian Army to the reserves, he did not hold a Hero of the Soviet Union or Russia award, nor was he ranked among the Knights of the Order of St. George.

The Hero's Medal is the highest award and the highest honorary title awarded in Russia. The Russian President personally awards this order to those who have distinguished themselves through extraordinary bravery in the service of the state. The Order of St. George is awarded not only for defending Russia in the event of an attack, but also for "carrying out combat and other operations on the territories of other states to maintain international peace and security", as stated in an order by then President Dmitri Medvedev of August 13, 2008 is called.

But for what service could a man who has been out of active service for four years have received such an award? Is it proof of his mercenary operations, which by law shouldn't even exist? Not only engaged by the Kremlin, but even honored?

And Utkin didn't remain the only mercenary at the December 9 banquet. Andrei Troschew, who is said to be his deputy in the "Wagner" troupe, was also in the room. He was also filmed by the cameras of the state broadcaster Rossiya 1. Several military medals adorned his chest, including the gold medal of a Hero of Russia.

And again the same snag: According to information from Fontanka.ru, the Afghanistan veteran was not awarded any such medal until he left the SOBR unit, a special police unit comparable to the German special operations command that reports directly to the Russian Ministry of the Interior. He too must have received this award after the end of his active service in the spring of 2014. The only question that remains is: what for?

The strange appearance of the two "Wagner" commanders at the banquet would probably have been forgotten if a picture had not appeared on social networks in January that is said to have been taken on the same evening. It shows Putin - in the company of Utkin and Troshev.

The Kremlin didn't bother to deny the meeting. But downplaying it. "On the fringes of the reception, the president takes many photos with guests," Kremlin spokesman Dmitry Peskov said. "Obviously it's one of those pictures. But there was no separate audience with anyone," he claimed.

However, this does not answer the question of what the two mercenaries were doing at a Kremlin reception.

There have long been indications that the "Wagner" group is a Kremlin mercenary army. "We know that their training camps are in Molkini, in the immediate vicinity of the 10th brigade of the GRU military intelligence service. We assume that they will be instructed directly by the senior central body of the Russian military intelligence service," Ruslan Leviev said in an interview with the independent radio station "Swoboda".

The young man is one of the activists of the Conflict Intelligence Team blog, which aims to expose Russian military activities abroad. Media around the world rely on research by the group, which, for example, ended the myth of a "clean" Russian air war in Syria.

Leviev is convinced that the mercenaries are equipped and financed by the Russian Defense Ministry. "If the Russian authorities did not approve of their existence, their training camp could not possibly be located next to an elite GRU unit," he says.

Research by the online newspaper Gazeta.ru has also shown that the "Wagner" force has a base in the immediate vicinity of a GRU brigade. Last year, the Ministry of Defense is said to have invested 50 million rubles in modernizing the railings of the "Wagner" troops.

"In Russia there is no legal basis for the existence of private military companies. It is impossible for a civilian organization to own sniper rifles, mortars, grenades and so on. Private security companies also have no right to own such weapons," Levev clarified. "But the 'Wagner' group has them."

The assumption that the mercenaries are equipped by the Ministry of Defense is also supported by materials from Syria. Images released by IS show the fighters with weapons only owned by the GRU. The "Wagner" people also like to pose in front of Ministry of Defense helicopters and planes.

Men who have already met the "Wagner" troops in action are also convinced: the men are fighting on behalf of the Kremlin. So does Bondo Dorovvich. According to his own statements, the entrepreneur fought alongside the separatists in eastern Ukraine in 2014, as one of those notorious volunteer fighters from Russia. "These are mercenaries under the auspices of the state," he says of the "Wagner" people in an interview with Radio "Swoboda". "The GRU controls them directly. It's actually an army."

The appearance of Utkin and Troshev in the Kremlin further supports these assumptions.

1 Brazil: Lula beats Bolsonaro in the first round of... 2 Prime Minister: Crisis at home: Kretschmann justifies... 3 World Architecture Day: The crookedest, the tallest,... 4 Train: Selfies on a freight car - the deadly danger 5 Star of the day: Three goals in 13 minutes: Werder... 6 Formula 1: The lessons of the Singapore Grand Prix 7 Offers in September: Universal tool case from Makita... 8 Energy crisis: IEA advises EU to cut gas 9 Home remedies: This is how cabbage wraps help with... 10 Elegant and fashionable: chic for a wedding as a guest:... 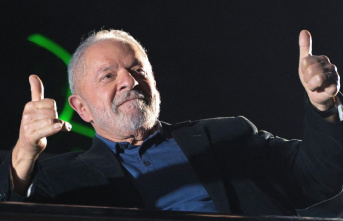 Brazil: Lula beats Bolsonaro in the first round of...