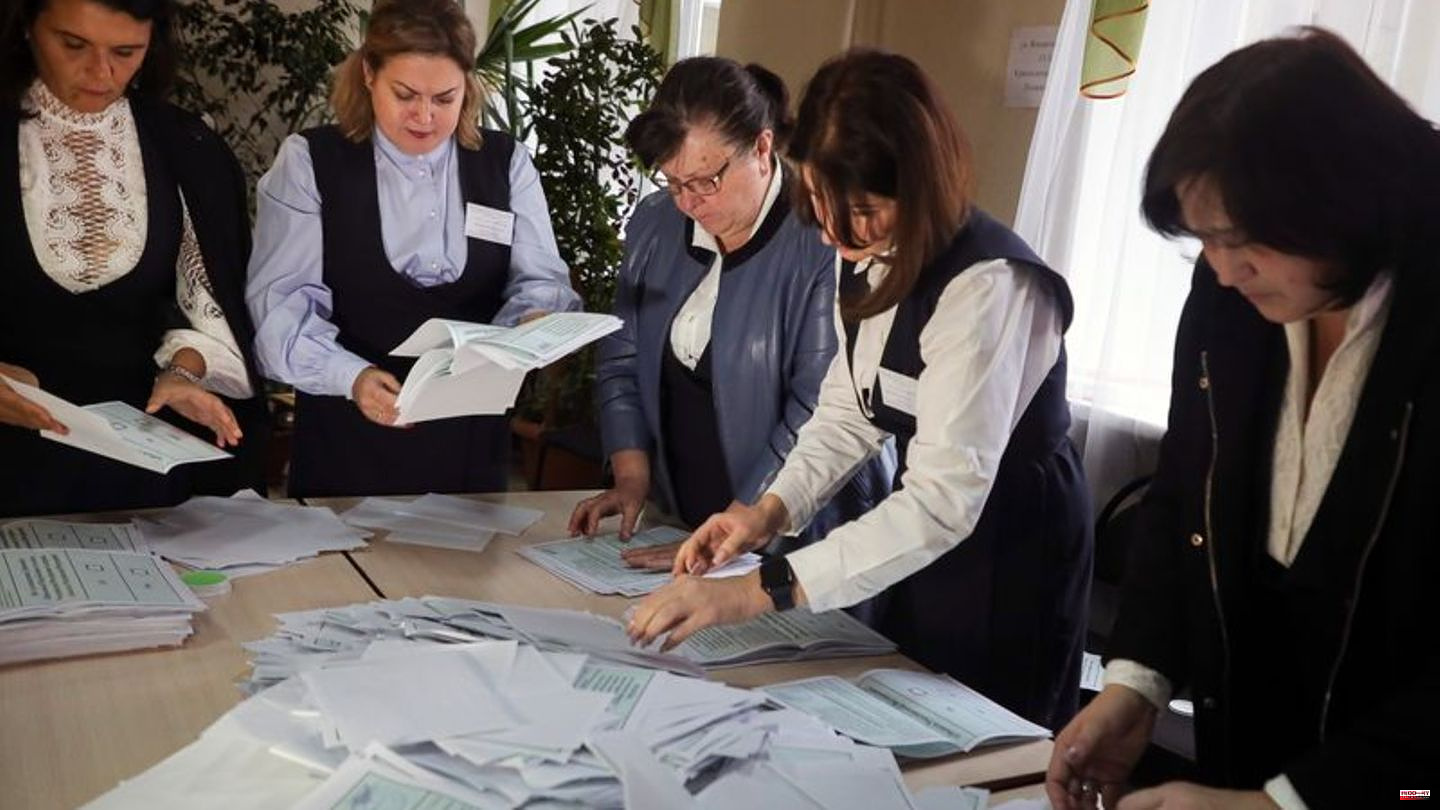 After the first ballots were counted at polling stations in Russia, more than 97 percent of voters from the regions of Luhansk, Donetsk, Kherson and Zaporizhia voted in favor of their home regions joining Russia, Russian agencies reported on Tuesday. Ukrainian refugees in Russia have also been called to vote since last Friday.

A little later, Moscow also reported high approval ratings from the occupied territories themselves: According to initial information, more than 87 percent of voters in Cherson were in favor of joining Russia, and in Zaporizhia more than 92 percent, it said. An unprecedented wave of annexations is therefore likely to begin in the coming days.

Mock referendums are not recognized internationally

The mock referendums are not recognized worldwide because they were held in violation of Ukrainian and international laws and without minimum democratic standards. Over the past few days, observers have pointed to numerous cases in which Ukrainian residents of the occupied territories have been forced to vote.

In a next step, it is expected that the occupation administrations deployed by Moscow will officially apply to Kremlin chief Vladimir Putin for admission to Russian territory. The Kremlin had indicated that this could happen quickly. Before the start of the sham referendum, Putin had emphasized that the areas would then be completely under the protection of the nuclear power Russia.

The chairwoman of the Russian Federation Council, Valentina Matviyenko, said shortly after the end of the five-day sham referendum that the upper house of parliament could decide on the accession of the occupied Ukrainian territories to Russia next Tuesday. The next scheduled meeting is scheduled for that day, Matviyenko said, according to Russian agencies. So far there is no need to call special meetings.

Russia with concrete plans for annexation

The media had previously speculated that Putin could formally announce the annexation of the four regions in eastern and southern Ukraine in a speech before both chambers of the Russian parliament this Friday.

According to a newspaper report, Russia already has concrete plans for the incorporation of the Ukrainian regions: The plan is to form a new federal "Crimean district", the Russian newspaper "Vedomosti" reported, citing sources in the Federation Council. This district should include the Black Sea peninsula of Crimea, which was annexed in 2014, as well as the occupied parts of the Cherson, Zaporizhia, Donetsk and Luhansk regions.

The new head of administration should therefore be Dmitri Rogozin, who was replaced as head of the Roskosmos space agency in July, it said. The media had already speculated in July that the hardliner and nationalist could become one of the Kremlin curators in the separatist regions of Donetsk and Luhansk in eastern Ukraine.

Zelenskyj: Annexation puts Putin against all of humanity

Ukrainian President Volodymyr Zelenskyy has called on the international community to take decisive action against a possible imminent annexation of parts of his country by Russia. Referring to Putin, he said in a video address to the UN Security Council: "Annexion is the kind of action that puts him alone against all of humanity. A clear signal is needed now from every country in the world." Any illegal annexation is a crime against all states.

Meanwhile, the USA is preparing a UN resolution against the Russian sham referendums. Ukraine's fight is also a fight for the values ​​of democracy, said US Ambassador to the UN, Linda Thomas-Greenfield, at a session of the United Nations' most powerful body in New York. "Therefore, we will introduce a resolution condemning these sham referendums, urging member states not to recognize Ukraine's changed status, and obliging Russia to withdraw its troops from Ukraine."

A vote in the Security Council will almost certainly fail due to Russia's veto, but could allow conclusions to be drawn about the degree of Russia's isolation. Bogus referendums in eastern Ukraine: Up to 98 percent:...