What to see here? In the foreground a crouching figure. A pile of cloth. burqa. Including a man of female sex. A person who must not be human, who must disguise 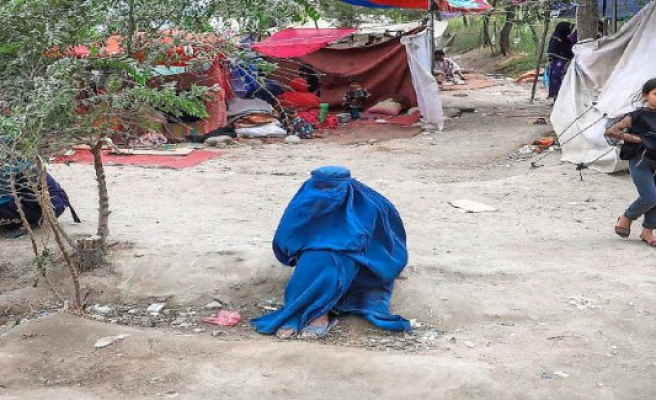 What to see here? In the foreground a crouching figure. A pile of cloth. burqa. Including a man of female sex. A person who must not be human, who must disguise himself beyond recognition. It's a picture from Afghanistan. It is the image of a woman. And the picture of the future of Afghanistan under the Taliban. Under the rule of Islam. For the women, the darkness under the burqa-the prison of the most brutal male rule. < / p>

The woman in a Kabul camp is extinguished as a person by the concealment except for the fabric grid in front of her eyes. This is what the religion of their male masters demands. To the right of the burqa figure, a girl walks into the camera with a skeptical questioning look. It is still undisguised. It is still childish personality. < / p>

About the author < p class="noads" > Frank A. Meyer – is a Swiss journalist, chief columnist of "SonntagsBlick" from Zurich and has lived in Berlin for many years.

< / p> In Switzerland, the concealment of women is prohibited The future as nothing occurs when the child experiences his first menstruation. At this moment, the girl who is just awakening to the woman, who is just developing into a personality, is extinguished for society. An adult individual must not become one. Religion does not tolerate women as personalities. The power of men, armed to the teeth in Afghanistan, fears nothing so much as the power of women – the free woman, the self-empowered woman. < / p> < p > In Switzerland, the concealment of women is prohibited. The Social Democratic National Councillor Tamara Funiciello vehemently opposed this ban in the referendum. Because, in their eyes, it curtails women's freedom: "What a woman wears or does not wear is decided exclusively and without justification by a single person: the woman herself." Advertisement

More columns by Frank A. Meyer Grüne sound the alarm on climate change, will solve the problem but others We must not let Afghan women down in this murderous reign Gender star is a sign of elitist behavior, not for equality Columnist criticizes anti-racism knee-jerk reaction:" Fighting is done upright " < / p> Feminism perversely prevails in Afghanistan < p > Perhaps Tamara Funiciello is now calling this phrase, as loudly as she can, to the women in Afghanistan. Maybe she's ashamed, too. For example, in front of the girl, who will soon be threatened by the burqa. The leftist feminism that Tamara Funiciello preaches has a popes: Judith Butler, gender professor at the University of California, Berkely. In the following words, she justifies the burqa: "It symbolizes that a woman is modest and attached to her family; but also that she is not exploited by mass culture and is proud of her family and community (...)

Losing the burqa therefore also means suffering a certain loss of this bond of kinship, which should not be supported. The loss of the burqa can bring with it an experience of alienation and forced Westernization."The liberation from the burqa as a compulsion to Western freedom-that's what you have to come to first! < / p> < p > Zarifa Ghafari, 27 years old and mayor of Maidan Shar, capital of Maidan Wardak province in central Afghanistan, gives the answer to Judith Butler. Laconically, she explains what the Taliban are doing to an Afghan woman who has become an undisguised, modern woman under Western-inspired freedom: "Killing."

This might interest you on the subject of politics:

< li > Because more and more people are vaccinated, Bavaria's Prime Minister Markus Söder wants to abolish the FFP2 mask requirement. At the beginning of the year, he had advanced exactly with it. However, there have been concerns about the working masks for a long time: Because who does not wear the mask properly, has little of the promised extra protection. No real seat, no protection - Söder tilts FFP2 duty-Experts have long warned of dangerous "leakage effect"

1 Illinois Democrats approve new legislative maps over... 2 High winds could cause flames to flare up around Lake... 3 Find a polling station: How to find my polling station... 4 Idaho hospitals almost buckle under the relentless... 5 The death toll in Ida increases with the deaths of... 6 Biden message for battered Gulf Coast: "We are... 7 Suga withdraws from party vote and paves the way for... 8 After a long battle with cancer, Sarah Harding, Girls... 9 Los Angeles law prohibits homeless encampments 10 Continued search for missing Navy sailors after a...