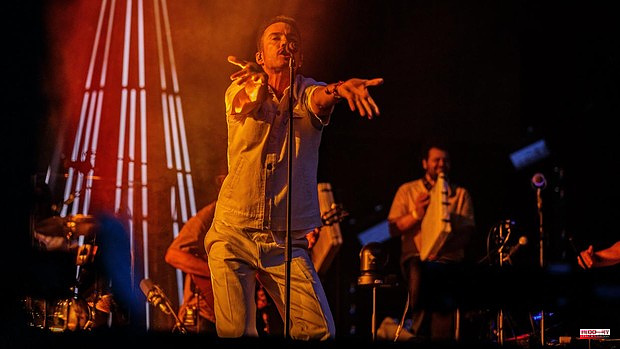 It was not 'June 23'. But 24. We weren't in 'Copenhagen' either, but 'Save yourself who can', because those who were at the Wanda Metropolitano last night living the Vetusta Morla party witnessed the band's 'Master Blow'. They filled the stadium where it was, that's how it was marked in red on the agenda of the most important Spanish 'indie' group of the moment, the most significant date of the 'Cable a Tierra' tour. The largest concert for 45,000 people (although they did not manage to fill it and there were many empty spaces in the stands).

Despite this, it was a milestone in the career of a formation that knows what it means to start from the bottom and preaches "I cook it and I eat it" both when it comes to publishing their albums and organizing and setting up their tours.

With this 'tour', the band met again with the public, some somewhat heterogeneous followers who last night did not stop dancing during the two hours that the performance lasted.

And it was not easy to meet expectations, especially when so much has been said about a series of concerts in which everything is taken care of down to the smallest detail, from the scenery to the screens, the accompanists and the music - along with the group they were also on stage a cast of artists from two formations: El Naán and Aliboria-.

So said and done. Vetusta Morla, that is, Pucho (voice), David García 'el Indio' (drums), Jorge González (percussion), Álvaro B. Baglietto (bass), Guillermo Galván (guitar) and Juan Manuel Latorre (guitar) came on stage past 10 p.m. Although the concert was supposed to start half an hour before, on the screens they announced that the start was being delayed to wait until nightfall. But the time came to throw that 'Cable a tierra', the title that gives its name to the tour (also to the band's sixth studio album) and nothing was ever the same.

Dressed in white, they opened the performance with 'Puñalada trapera'. They did it as in a kind of cage, behind some bars converted into a screen where they show a careful staging. An energetic 'The Virgin of Humanity' gave way to some verses by Héctor Castrillejo that were filtered throughout the 'show' as part of the show. 'It won't be me' sounded before a 'Good night, Madrid' that Pucho launched before 'The bogeyman' sounded. Just a few verses later, the sound and image on the screens disappeared. At first, the attendees continued to sing at the top of their voices. It seemed that it was a maneuver so that the public would be heard. But after a few seconds, it was already seen that this was a technical failure. After the whistles, the clapping, shouts of "lo, lo, lo" and a few minutes of uncertainty, the music returned. The group took it with humor. It was almost a premonition of the next song that could be heard, 'Golpe maestro', because after what happened the public was much more animated. We don't know if master, but it was a brutal blow for everyone to warm up. «I hope that nothing prevents you from enjoying tonight. Any. I want to take advantage of this thought to say that it is a pleasure to be together again. We have been a couple of years with very unstable, dark and introspective times. But tonight we want us to be aware of how fucking lucky we are to be here today. I want us to enjoy this ritual and enjoy it, there will be music, there will be poetry, there will be friendship and a lot of love, "said Pucho as a prelude to 'Corazón de lava' and 'Maldita dulzura'.

The touches of folklore were provided by the components of Aliboria and Naán who, at a central table on the stage, sang 'Bakers of hard bread'. It was the prelude to that verse announcing that «we will sail together towards the abyss of Finisterre»... Madness broke out, it was one of the high points of a concert in which the sound was not as clear as expected. But it didn't matter. The party continued with one of Vetusta Morla's greatest hits. 'Copenhagen' resonated to infinity. All with their arms raised to receive the first chords of 'Boca en la Tierra', 'La Vieja Escuela' and the extraordinary 'June 23' -"Take advantage, without masks or distance", shouted the band's vocalist-.

'At the end of the escapade, 'What makes you great', 'Palmeras in la Mancha' or 'Consejo dewise' -where the rap of the Argentinian Wos slipped in- alternated with 'La diana', 'What makes you grande', 'Te lo digo a ti' -the stadium did not stop vibrating-, 'Valiente' and other hits such as 'Sálvesse que puede' and 'Saharabbey road' -the ground came to shake with these songs-. Although the end has come. The band said goodbye. However, there was still strength for a final encore. It only remained to thank the entire team and claim how bad the music industry has been during the pandemic. The ritual of Vetusta Morla was consummated. "We'll be back," they promised.

1 5 Facts About NYC Smart Home Market 2 Our Lady of Transit: religious architecture at the... 3 Regional houses: the small homeland beyond the terroir 4 Madrid, shielded by the NATO summit: street closures,... 5 Solar nutricosmetics, in which cases is it recommended? 6 Nadeem Siraj, chef of Indian cuisine: «Having the... 7 The UN denounces that Maduro continues with the torture... 8 They demand from the Cuban regime a life certificate... 9 NATO Summit: the agenda of the 48 hours that will... 10 At least two dead and several injured in a shooting...