Yesterday, the National Police handed over to the Italian authorities two works of art of great historical value that had been stolen in Italy and that have recently been recovered in Madrid thanks to police collaboration between the two countries. 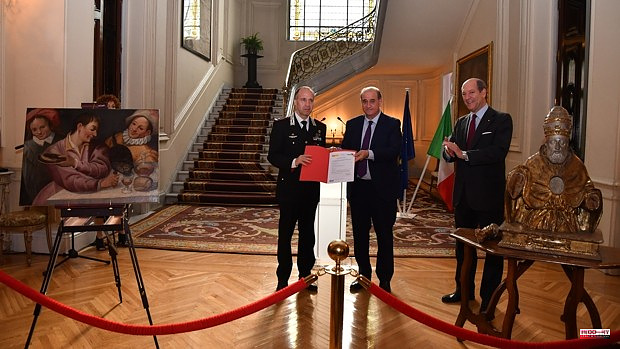 Yesterday, the National Police handed over to the Italian authorities two works of art of great historical value that had been stolen in Italy and that have recently been recovered in Madrid thanks to police collaboration between the two countries. It is a reliquary bust in gilt and silver wood from the 16th century of Saint Clement Papa, attributed to Aniello Stellato, which was kept in the church of the Gesù in the town of Lecce and was stolen in 2019, and an oil on canvas by an anonymous Lombard from the 17th century entitled 'Lunch', which belongs to a private collection in Bologna and was stolen in 2000. The work was recovered by researchers before being auctioned.

At the award ceremony at the Italian embassy, ​​which was called 'The Returned Art', Ambassador Riccardo Guariglia highlighted "the importance of the fruitful cooperation that has been consolidated in recent years between the Spanish and Italian authorities, also in the area of ​​the fight against crime and in this specific case, the protection and safeguarding of cultural heritage", and thanked the Historical Heritage Brigade of the Spanish National Police and the Cultural Heritage Protection Command of the Carabinieri "for their constant effort in this sense, through the recovery of stolen works and their subsequent return to their communities of origin».

The Italian ambassador also highlighted "the fundamental role of cultural diplomacy between Italy and Spain, two countries characterized by a strong affinity, as well as by a common history that has always found in art and beauty a fertile and rich field of collaboration." ».

Subsequently, the formal delivery of the two works of art took place by the director general of the National Police, Francisco Pardo Piqueras, to General Roberto Riccardi, head of the Carabinieri Cultural Heritage Protection Command. «To talk about cultural heritage is to talk about our identity and the origins that explain us. It is talking about discovering, in our diversity, what unites us as a country and as Europeans", Francisco Pardo pointed out in his speech, who also stressed that "both Italy and Spain are convinced that the common effort to which today we put the finishing touch It will help us hand over to future generations an unscathed heritage.

The art historians, David García Cueto, from the Prado Museum, and Roberto Alonso Moral, from the Complutense University, have been in charge of studying both works, which will return to Italy in the coming days.

The investigation that led to the recovery of the religious work from the 17th century began when the agents learned, thanks to information provided by the Ministry of Culture, that an antique dealer in Madrid could be selling a reliquary bust representing Saint Clement. Pope who would have been stolen from the interior of the Church of the Gesu in the Italian town of Lecce. The agents contacted the Italian authorities through the Italian attaché in Spain, who provided all the data related to the work of art and the report of its theft.

With all the information, it was possible to detect and seize the bust in an antique shop in Madrid, and information was also obtained that could help clarify the theft of the piece. These data have already been communicated to the Italian authorities.

The recovery of the oil was carried out once the agents received an urgent mail from Interpol-Rome, informing them of the location of the canvas in a well-known auction room for works of art and that it was advertised to be Auctioned. The inquiries carried out by the agents in collaboration with the Italian police attaché revealed that the painting lacked export authorization from the transalpine country. After various steps, the investigators were able to detect that the work of art belonged to a company formed by three antique dealers who, in turn, had acquired the piece from another person in the sector.

1 Nissan closes a new collective agreement until 2024... 2 Thirteen arrested for defrauding 500 people in the... 3 The Chair of the Tagus denounces the "alarming... 4 They arrest a woman for stealing jewelry and money... 5 Antonio Pérez Cadalso, chosen best seller of the... 6 The Interior doctor arrested for the second time after... 7 The Bank of Spain issues a warning about some payment... 8 Diego López is no longer at Espanyol 9 Beck, the technological hippie who became a rockstar 10 Alba buys 37% of the Facundo Group for 22 million... 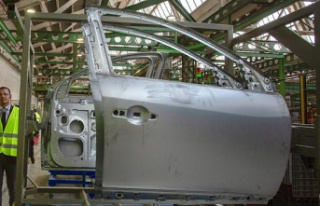