Thomas Hermanns turns 60: "I have to force myself to go out" 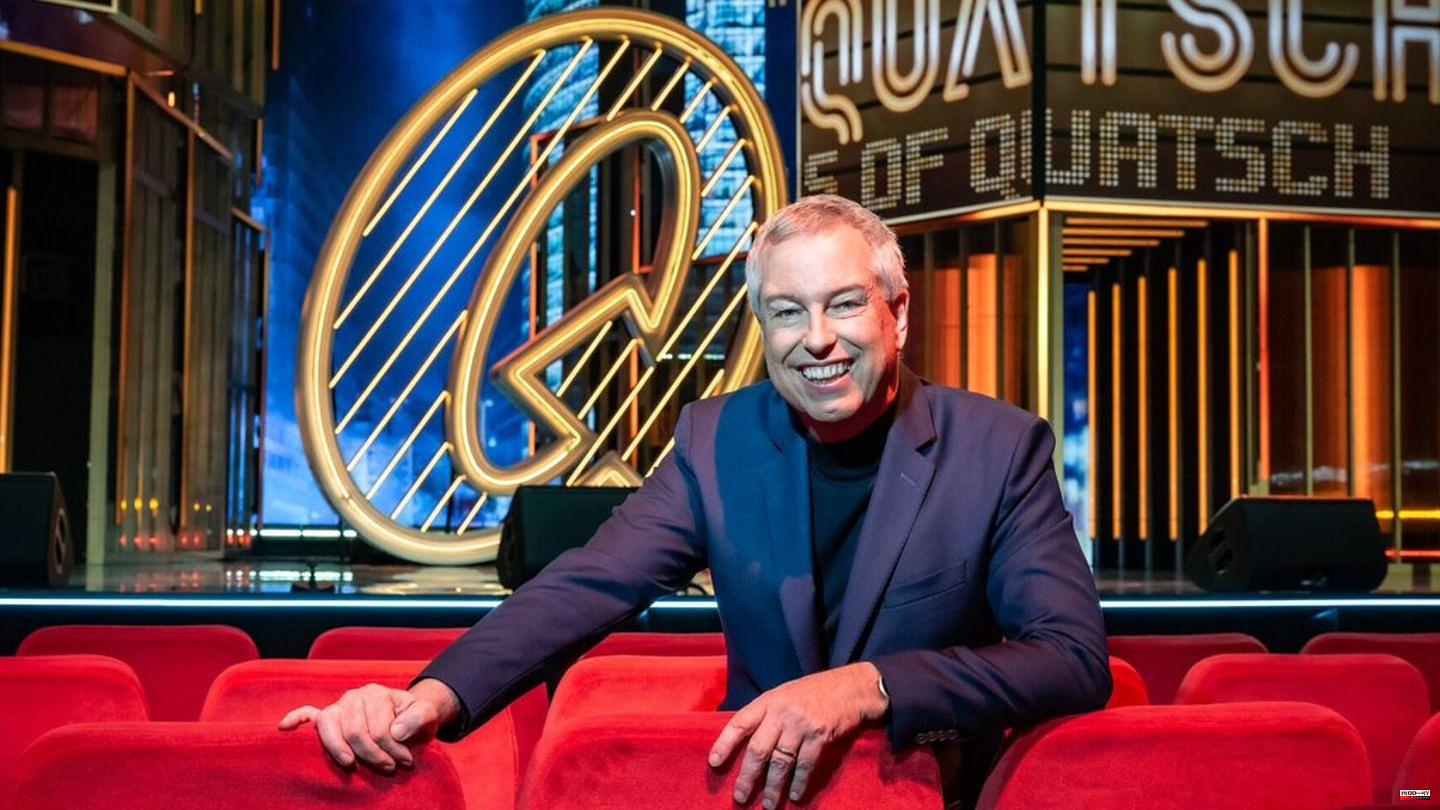 There are two special events coming up in the "Quatsch Comedy Club": In "30 Years of Quatsch Comedy Club - Legends of Quatsch" (December 22, 8:15 p.m. on ProSieben) the round anniversary of the comedy show will be celebrated. Comedians like Michael Mittermeier (56), Rüdiger Hoffmann (58) and Ingo Appelt (55), who are closely associated with the club, will step onto the stage of the Theater am Potsdamer Platz in Berlin and look back. Also present in the big anniversary show is "Quatsch Comedy Club" founder Thomas Hermanns (59), who says goodbye as moderator of the show.

This will be acknowledged in a separate program on December 29 (8:15 p.m., ProSieben). In "30 Years Quatsch Comedy Club - Bye, Bye Thomas" Hermanns will celebrate his farewell with his own show from the Theater am Potsdamer Platz with many guests. In an interview with the news agency spot on news, Hermanns looks back on his beginnings on stage and explains what he is now doing on the comedy show. He also reveals what he has planned for his 60th birthday next March and why 60 is a "great number" for him.

Thomas Hermanns: It's my 60th birthday and I like to take stock. I don't think comedy is just a youth business. But if I imagine that I'm still standing there at 65 and presenting stand-up, I think that's wrong. It's really better if it's done by younger people who have a fresh look at moderation. I've always made them the way I imagined them and laid them out in 1992. Surprisingly, there were playback and other music numbers that I smuggled in and had nothing to do with stand-up. But do you really have to sing "These Boots Are Made for Walking" in a zebra dress? (laughs) It's good for the "nonsense" if someone thinks up and redefines it.

Hermanns: In the first show we look back at our old warriors who were there from the start. It's fantastic that we got the three guys who all appeared in the pilot at ProSieben, i.e. Rüdiger Hoffmann, Ingo Appelt and Michael Mittermeier, on stage. They're a bit like the three tenors of the "Quatsch Comedy Club" (laughs). The second episode is on the one hand my farewell, but on the other hand artists of the current stand-up generation can be seen, such as Tahnee or Ingmar Stadelmann. We want to show that "nonsense" also presents the next and the over-next generation - which we are already doing in the live clubs. Our core brand is a kind of three-generation model: We have comedians in their 50s, then those in their 30s and 40s, and people in their 17s or 18s who are just starting out. That's what I like about "nonsense" and I want to show that on TV in the future. That you don't just show the new, young "hot shit", but also rely on older colleagues and value the exchange of established stars with new talent. It's exciting what they can learn from each other.

Hermanns: I now sit more in editing. As a moderator, I turned off, drank my glass of sparkling wine and other people created the show. As a performer, I knew where the cameras were, but nothing more. Now that I'm doing it myself, you deal with the smallest details. Here's the crane ride, there's something coming from the left... I'm getting to know television as a doer all over again and I'm doing my little television high school diploma.

Hermanns: I'm not going away from television, the farewell only refers to "nonsense". At the beginning of the year I can be seen again on "Glücksrad" and will also moderate other shows on television. Only in stand-up, now is the time for generational change.

Hermanns: When we started we were very naïve, we didn't know exactly how to do it. Up until then there had actually only been cabaret and Otto records. I chatted up people and told them: now be comedians, get on the stage and play for ten minutes. What came out of it is a boom in the 90's and today it's like a giant department store. Everyone can choose a different style of comedy, see it live on stage or consume it digitally through podcasts, etc. There is more and more and the field is always expanding, in which everyone chooses what he or she likes. With "nonsense" it is important to me that we always offer an overview. The mixed platter is more interesting than having to choose just one course.

Hermanns: We have seen many trends come and go. It always comes in waves, once the surrealistic comedians like Olaf Schubert were in front, then the wonderful comedians with a migration background came, from whom the "German potatoes" could learn something. The women, where we really always had too little, are now stronger and are allowed to be in a bad mood and grumpy - Carolin Kebekus held the flag high. All in all, I'm proud that people in Germany don't argue like they used to. That people can't stop laughing and consume comedy anytime and in any form. I hope that German culture will not be denied that again. We certainly made our contribution to this with "nonsense". That Germany is becoming funnier and is also perceived as funnier from abroad. In New York they have known since Mittermeier at the latest that there are also German comedians, which nobody expected.

Hermanns: We viewed a lot of old material for the new show. I'm standing there in the 90s like a foal or a young deer, happy, but have absolutely no idea what I'm doing. I imitated the TV presenters and the great show hosts I knew from my childhood. But it obviously worked and people liked it. From about 2000, when I had my second show with "Popclub" and did all the award shows, I realized what the job of a funny host actually is. I've never been a stand-up comedian, I was a host on a stand-up show setting a stage for the comedians. Loud grenades like Mittermeier and Co. came and did the greatest numbers and I always had to and wanted to crown it and bring it forward optimally. It was completely new territory and I'm proud that I fumbled my way into it, even without a direct role model, because there wasn't anyone who could have explained it to me.

Hermanns: I wrote a whole book about it, "Sexy Sixty", which will be published next year. It's got all my tricks on how to cheat age. The number is great, if you're still fit and your body is still going strong like mine, then between 60 and 70 is a good time. You know what you are doing, what is good for you and what is not. I will choose future projects very carefully and will no longer do anything that simply goes along with it, but rather special things. This creates free space that can be used for other things. It's a phase where you reassess your work and I find that exciting because I actually worked through everything from 30 to 60 and now I look at it a little more relaxed. What I have to force myself to do is go out. That's my theory: when you're 60 you can't sit on the couch and watch series at ten every Friday evening in Berlin, you have to be on the dance floor until 4 a.m. sometimes. Otherwise you have missed something. The hangover lasts longer, like three days instead of one, but you can plan some free time for that.

Hermanns: I even celebrate twice, on my birthday abroad and in Germany again in May with a big party that will be a disco theme party - who would have thought it (laughs). I'm already planning and looking forward to the Studio 54 party.

Hermanns: In addition to "Wheel of Fortune", I also do live moderation, such as at the "Radio Regenbogen Award". And then we open another "Quatsch Comedy Club" in Hamburg in a very special location. It's going to be exciting because we haven't been there for two years and it's actually our hometown.

Hermanns: We're celebrating Christmas this year with friends in Vienna. I always find the city very Christmassy and appropriate for the holidays. It will make us Austrian comfortable there, that means with a lot of Sachertorte and the otherwise equally light Viennese cuisine (laughs). 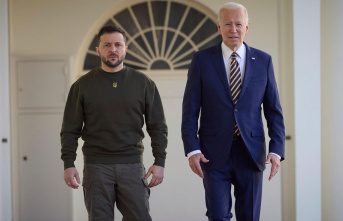 Ukrainian President in the US: Annoyed by Scholz?...