Between the walls of the three historic halls of Lhardy, everything has happened: confabulations, meetings and pacts. 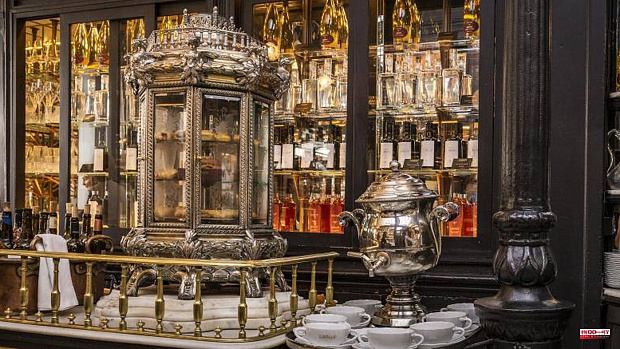 Between the walls of the three historic halls of Lhardy, everything has happened: confabulations, meetings and pacts. The revival of the restaurant is reminiscent of Madrid in 1800 and invites us to imagine Azorín drinking a cup of his traditional consommé in the Elizabethan room, the silver trays and exuberant pheasants at the banquets of Queen Elizabeth II, or the dancer –and spy – Mata Hari enjoying her last 'half combination' before being arrested outside the premises. After Pescaderías Coruñesas took over the reins, Lhardy has recovered part of his identity, his original crockery and cutlery, dusting off a great legacy that was hidden and making it accessible to anyone who wants to see and enjoy it.

Its walls have witnessed key moments such as the Transition, romances and secret meetings. The Elizabethan room has received all the kings of Spain since its opening: Isabel II – to whom it owes its name – Alfonso XII, Alfonso XIII, Don Juan Carlos, Doña Sofía or King Felipe VI. An imposing gueridon from the year 1800 presides over the room together with another of the characteristic samovars, one of the most famous pieces of the restaurant, in addition to the unique croquetero and gold cutlery, now used on very special occasions.

Politicians, writers and bullfighters, among many others, have been reflected in its large mirrors, and they continue to mourn the death of Queen Elizabeth II, when their frames were painted black. "The dining room was filled with chandeliers, pheasants, sea bass, fruit bowls and centerpieces at institutional events while the queen presided over the table," explains Pascual Fernández to ABC, manager of the restaurant. The list of historical pieces is so extensive that it makes the diner doubt: restaurant or museum? Perhaps Lhardy is a bit of both. Many of these original pieces awaited their moment to shine again on tables and in living rooms. There is no lack of detail, even the commanders of 1841 have been recovered in which, following tradition, the recommendations of the day are still written by hand with French letters.

It may seem strange, but every detail is designed for a time when customers did not wear jackets, but layers, and when the cabins had not yet reached the capital. Almost in the center of the small, narrow corridor, halfway between the white room and the Elizabethan room, is the first telephone in Madrid. A small corner, with a single light on the ceiling, in which barely one person fits, houses the 20th apparatus in Spain, recovered in the reform. It was installed there by order of Alfonso XII, and today it is a striking element for the youngest, and a trip to the past for the most long-lived clients, who see in it a window to their childhood.

Everything seems to have stopped in time, with nothing becoming obsolete. Each corner of the restaurant brings to our days an anecdote or an achievement for the Madrid of the time: for example, being the first public establishment in which women were allowed to enter without a man, something that happened in 1858. The Sarasate spaces , Gayarre and Tamberlick conserve the essence of the restaurant and allow expanding the corners in which great personalities and tourists can enjoy iconic dishes such as the Bellavista sea bass –cold– or its Canetón de las Landas duck with orange.

The Japanese and white room have nothing to envy the Elizabethan. Emilio Lhardy was inspired by the very fashionable tea rooms in France at that time to design the first of them, which despite being named like that, drinks from countries such as Vietnam, China or Japan. The wallpaper, from 1839, is edged with gold. Such is its value that the National Library houses a sample of this material. Two Chinese vases from one of the most important dynasties that ever existed frame the room, and the lamps – also original – are the protagonists of another of the restaurant's milestones: Lhardy was the first public establishment in Madrid to have gas lighting. Of the three that illuminate the room, the central one is the star of the room. There is only one more like her in the world, and it was a gift from Victor Hugo. It has some drawings that, according to experts, make it a most unique piece.

Finally, the white room has served as a shelter for countless political, business and monarchical pacts. Part of the staff claims to have witnessed the agreements between Santiago Carrillo and Manuel Fraga before and after having gone to Congress, in addition to the fortuitous encounters between Isabel II and her companions, for whom she chose this small space, which she reached through one of the many passageways that, according to rumours, run through Madrid. This corridor started from the Teatro Real, and left the queen in the Lhardy cellar, where today it is easy to see, according to the staff, a walled-up entrance. On one of these occasions, it is said that the queen lost her corset, about which there are two versions. The most innocent affirms that, after eating too much, she decided to take it off in search of greater comfort, while the second assures that this was the result of a moment of passion with her partner.

All the works exhibited to the public do not have any type of protection, and are susceptible to falls, damage or mishaps. "Many people are surprised that we have the pieces so exposed, but in the end, that is the essence of Lhardy," says Pascual Fernández. Once again, history and art merge in the iconic restaurant in the heart of Madrid.

1 La Cocina de María Luisa, the restaurant of the former... 2 How to make mochi ice creams like the ones that are... 3 Cuñas Davia Barrica 2020: from Ribeiro to the world 4 Iceta studies making European aid from Inaem more... 5 Masters of painting are vindicated at the Maastricht... 6 Evening of Year 2 of Ibai Llanos: guide to everything... 7 What time is Ibai Llanos' Year 2 Evening and... 8 Unusual discovery in Pompeii: a turtle with its egg 9 The cultural bonus collides with empty Spain 10 A Goya painting does not find a buyer at an auction... 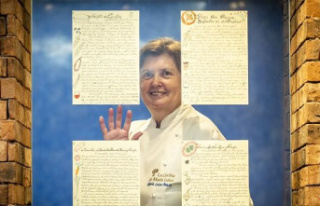 La Cocina de María Luisa, the restaurant of the former...