The Swedish Crown Princess Victoria (45) visited the Royal Opera in Stockholm with her husband Prince Daniel (49) and their two children Princess Estelle (10) and Prince Oscar (6). The Swedish Crown Princess Victoria (45) visited the Royal Opera in Stockholm with her husband Prince Daniel (49) and their two children Princess Estelle (10) and Prince Oscar (6). On the family outing, the little royals were allowed to browse through the costume collection of the venerable house, as shown in a three-and-a-half-minute video on Instagram. A performance of Cinderella followed.

Ten-year-old Princess Estelle and her six-year-old brother tried on a number of the imaginatively designed costumes from the stock of the Stockholm Opera House themselves. Prince Oscar donned a Roman helmet while his sister posed in a red dress, to which Crown Princess Victoria remarked: "Look, Estelle is a cracker".

The Swedish royal family then met the Brazilian prima ballerina Luiza Lopes, who, together with a colleague, revealed some of the secrets of ballet. Princess Estelle chats to Lopes in fluent, flawless English in the video, prompting one Instagram user to comment, "Very impressed with Estelle's English."

The Royal Opera in Stockholm will celebrate its 250th anniversary next year. It was founded in 1773 by King Gustav III. (1746-1792). In January 2023, the royal family will therefore return for a grand anniversary gala. Princess Estelle and Prince Oscar have certainly become opera fans already.

1 Energy: E-fuel plant in Chile - with strong wind to... 2 Quarterly figures: Sporting goods giant Nike increases... 3 "Sat.1 Spezial": Tears and a call to his... 4 Actress: Kim Cattrall mourns the loss of her mother 5 Afghanistan: The next step back: Taliban ban women... 6 Possible indictment against Donald Trump: "Trump... 7 Driving report: Skoda Enyaq Elektro: Dynamic Stromer 8 Oh, you conflicted ones: What we bicker about at Christmas... 9 Tuchel ready for new job: Focus is on Spanish La Liga 10 Ratings: Many see the Boris Becker interview and continue... 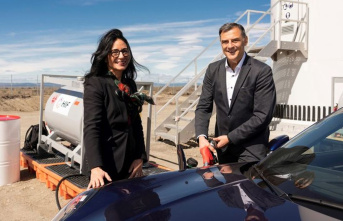 Energy: E-fuel plant in Chile - with strong wind to...