Neo-Western-Noir: Yellowstone - Blood, cowgirls and horses, that's why you have to see the highest grossing series of the year 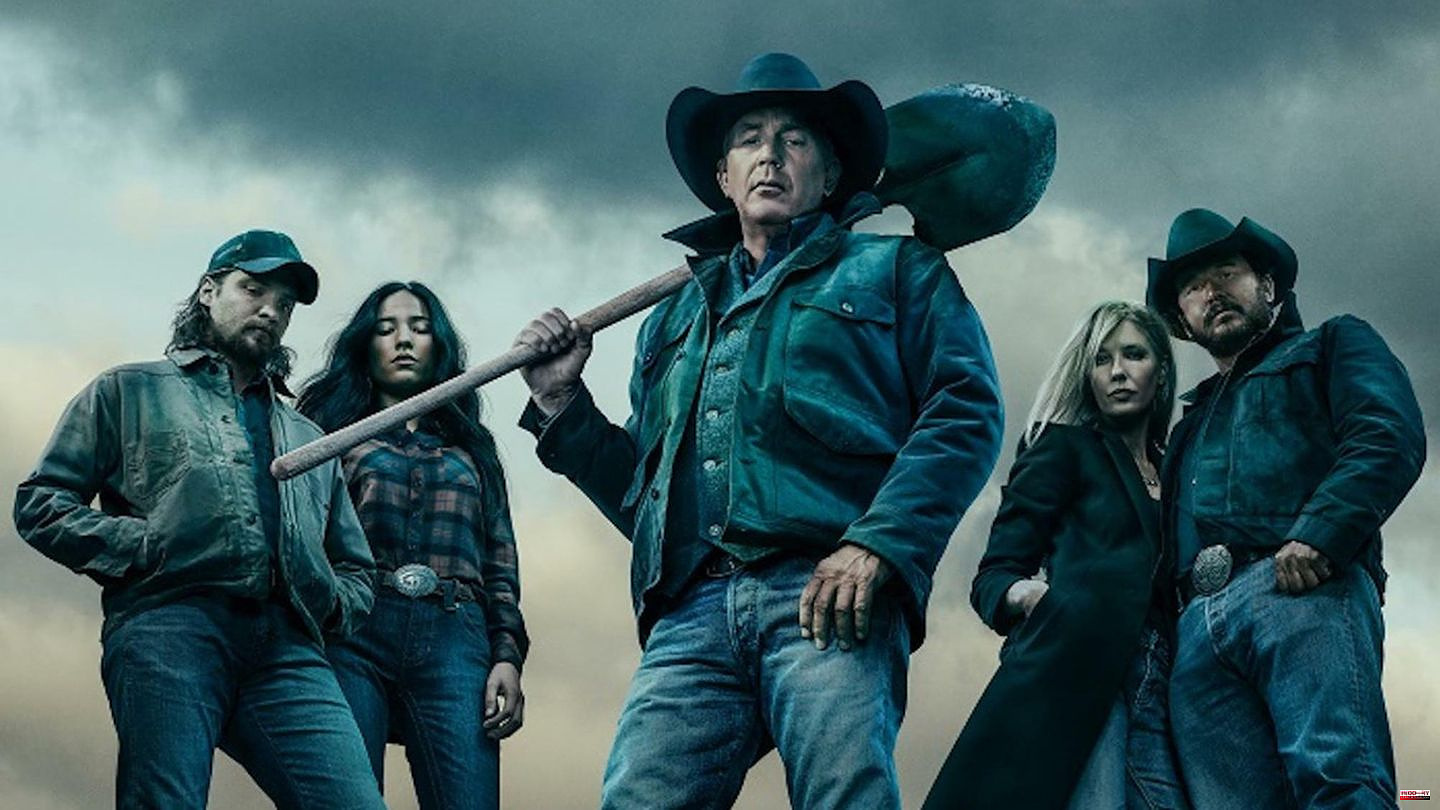 The bloody cowboy family saga "Yellowstone" has already completed its fifth season. One more successful than the other. The premiere of season 5 watched 12.1 million in the US - a feat, most series lose momentum over time. "Yellowstone" does not. The rancher epic never really made it into the arts pages and the world of film awards, even though Kevin Costner, an absolute Hollywood great, is in charge of the series. While other hit shows lavishly illuminate each episode, intellectuals treat "Yellowstone" with contempt and ignorance. The verdict is that the anti-woke series was made for rednecks and Trump fans.

That is as narrow-minded as it is wrong. What is it about: It follows the fate of a vast ranch in Montana where the dysfunctional Dutton clan lives under the rule of the - shall we say - difficult patriarch John Dutton - Kevin Costner. In addition to the father, the family includes his sons Jamie and Kayce, his Indian wife Monicy, daughter Beth and the foreman Rip Wheeler. Apart from a few flashbacks, the action takes place in the present, but the genre "neo western" says it: the customs of the Wild West live on on TV. "Noir" - the allusion to the dark, hard-boiled crime novels of the 1940s and 1950s - means that when it comes to pessimums and, above all, violence, John Wayne's films are more than a step up. Differences of opinion are always fought out with Colt and assault rifle at some point. Cattle thieves and land robbers are lynched like in grandfather's time. Instead of marauding ex-soldiers from the civil war, Nazi militias are now terrorizing the country. It's not realistic, and that's why it's not much more political than action films with nuclear terrorists and flying ninjas.

The series is by no means apolitical. As the ranch fights for its land, the bigger picture emerges: how rural poor America is being swallowed up by the East and West Coast big bucks. Money that has no interest in the traditional lifestyle, but is interested in profitable rural development with hotels, airports and ski resorts. The trick is that the Duttons of today find themselves in the role of the Indians of the 19th century. Indians who have been driven out of the valley by them. An irony of fate that everyone involved is aware of. The Native Americans - or First Nation - play a big role in the series. Not only that Monica, the wife of Kostner's son Kayce Dutton, is one of them. Initiation rites and totemism - his spiritual director is a lone wolf - determine the fate of Kayce. In drastic words and images, the alleged redneck opera slams the methods used by white Americans to rob Native Americans of their land and culture. Occasionally in big accusations - atypical for the taciturn series - often in small allusions. Like when Monica chokes out her real name, the name the white people took from her.

Another example: The lives of the Dutton children are overshadowed and poisoned by an abortion at a young age. To keep the "shame" a secret, Jamie Dutton, one of the sons, drives his sister, Beth Dutton, to a state abortion clinic. No questions, no costs, direct service and absolute anonymity. This looks like something out of a pro-abortion dream. But the price is high, the pregnancy is not only terminated, Beth's uterus is removed as a teenager. The German listener may not notice it, but for the US audience this is a clear reminder that "abortion" in the USA does not necessarily have a philanthropic history. In such clinics, Indian women were sterilized by the thousands. The same recipe existed for other "minor races" such as blacks or people who were considered antisocial. In dealing with the Indians, "Yellowstone" stirs up all the dirt of US history. Taciturn, without forefingers and long discussions. That's also a tradition, a western like the "Black Falcon" with the ultra-conservative John Wayne did the same thing.

In the development of characters and people, "Yellowstone" is a strange in-between thing. The basic features of the characters are drawn with a few strong lines and they don't change. The coward and selfish schemer always remains what he is. Kayce Dutton is the kind son who only wants the best. Blond and wild, he gives the viewers the most tender scenes of sensual love for his wife. Yet Kayce was born under the star of violence. If he stops at a broken down car on the side of the road, you can almost be sure that something bad will happen. For example, that nasty white people have kidnapped an Indian girl on a pleasure tour on the reservation and are in the process of mistreating her. A situation Kayce can only resolve in one way. Two more graves in the desert. The bodies were previously mutilated. According to the belief of the Indians, the two rapists will never find peace. Despite the static nature of the characters, it never gets boring. Not just for the action. The actors act convincingly and outstandingly in the individual scenes. Kevin Costner anyway, he gives his role depth through consistent non-acting, just like Robert Mitchum once did.

In "Yellowstone" there is no woman at the stove - the bacon in the ranch is frying a giant in the kitchen - the women are rough and made of steel. The good soul of the ranch, the mother, died when the children were little. Dutton's daughter Beth is completely derailed. The only meal she can make comes out of the bottle and is 40 percent. Your penance and mission in life is to destroy all enemies of "Daddy". You see them drinking, whoring, destroying other people. A helpless woman who insulted her Native American sister-in-law Monica humiliated her nastily: "I remember the time when you gave hand jobs in the morning to get the lunch money together at school." And incessantly - "Spandex?" as she forces the opponent to undress. "Really, you used to have an ass like a 12-year-old boy!", - until it becomes agony to watch. Even the mild-mannered Monica demands of her husband, the head of her family's enemies.

In the anti-woke series, too, men shouldn't get too cheeky. But who complains when women are sexist? So the ladies – two barrel racers who stop by the ranch – reach out whenever a nice cowboy ass shows up. So does Texas cowgirl Teeter. With obscene sayings and crude gestures she frightened her chosen one, who, distraught, prefers to crawl into the back of the car. Teeter yells: "Hey baby, what's that about? What are you doing back there? You belong up front. Over here, on mom's lap!"

One of the biggest pluses of "Yellowstone" are the landscape shots in Montana - which come across as grandiose on the screens at home today. From the start, the series was big and didn't skimp. Outdoor shots with 30 cattle and 12 riders are far more expensive than a studio scene in the same café over and over again. Of all the big series, only very few can afford something like this. "Yellowstone" is one of the few shows where you can actually see the work - the ranch, the cattle, the mountains. While in other formats, the highest feeling on the job is when three people stare spellbound at a screen and finally one calls out: "Now! The price is falling." In any case, most US series are set in the liberal semi-intellectual milieu of the east and west coasts - Yellowstone's Montana is a welcome change.

Another crucial goodie is overlooked in the criticism: "Yellowstone" isn't just one, it's THE horse opera. In most films and series you have to turn away in embarrassment when an actor is on the horse. There the hussar is played by someone who would be lucky enough to survive a round in the park. With every movement of the horse you experience how the would-be rider is working against his horse. Torment. That doesn't happen with "Yellowstone". Even someone who can't ride in the role of the series controls his horse perfectly from the hips, so as not to give the goof with flailing arms. The makers have also recognized the attraction of the four-legged friends. Good horses can be seen from season 1, but in the later seasons the world of stud stallions and horse shows breaks into the plot. If one speaks of "Food-Porn" on Instagram, one can attest "Yellowstone" "XL-Horse-Candy". From season 3, horse fans will be shown the art of the best western horses in the world. Absolute horse Olympus. Critics may not care - "horses again" - but for every rider and for the legions of "horse girls" the series is a must-read.

And the plot: Yes, it's always about the same thing: Small criminals and big businessmen want the ranch's land or they make life difficult for other ranchers. Victims are mostly old grandpas or young widows. The Duttons defend themselves with all tricks - and in the end, once again, corpses are dumped into a remote canyon.

Seasons 1 to 4 can be streamed in German, alternatively the series is available as a Blu-ray. Season 5 has not yet been dubbed. The German dubbing is comparatively good, the original is far better because of the sometimes extreme accent. In English should not do without subtitles. 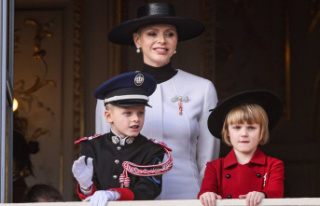 National holiday in Monaco: Charlène opts for a black...