With a euphoric anthem against the crises of this world, Seeed singer Peter Fox has reported back as a solo musician. With a euphoric anthem against the crises of this world, Seeed singer Peter Fox has reported back as a solo musician. In the song "Zukunft Pink", which was put online as a video on Thursday evening, the 51-year-old dancehall specialist celebrates life for almost four minutes with a driving sound and perfectly danceable beats. "Everyone paints black / I see the future in pink / Everything will be fine my child," Fox sings in the chorus. And makes it clear: "My sweethearts, the future is now!"

It remained unclear on Thursday whether the song is also a harbinger of a new album. The responsible label Warner Music expressly gave no answer to this question. The Seeed singer had a huge success with his first solo album "Stadtaffe" in 2008. Like the album, the releases "Alles neu", "Haus am See" and "Schwarz zu blau" were at the top of the charts for weeks.

In "Zukunft Pink" Fox gives a few clear instructions on how to proceed. "Power to the people / women rule the world," he sings about. Also on the dance floor a clear view: "All Almans can do the moves / Or they program the boots".

This time Fox got support from Inéz Schaefer, singer of the Etna duo, which is celebrated for its innovative music. As Inéz, she takes on the female part in the song "Zukunft Pink" with her rough, intense voice. "Do your thing, but don't look for meaning / And what's not there / You have to invent it," sings Inéz. "If you ask me / will everything be fine my child / just wish me a drink."

The video shows a view of the Moloch Berlin that is typical for Peter Fox: derelict industrial sites, backyards, soulless skyscrapers, fire in front of the big city silhouette. Inside, on top, in between, life is raging in the form of happily singing and dancing people.

In a narrative thread of the video, Fox again takes up the subject of alter egos and doppelgangers. On videos for the "Stadtaffe" album, he had a person with a monkey mask double his actions or even act alone. In "Zukunft Pink" he settles accounts quite violently and brutally with an android in the form of Fox.

Since Wednesday, there has been heavy speculation on the Internet about a publication, always full of euphoric anticipation, after Fox posted a short video snippet with cryptic hints. A trailer followed on Thursday with the first 15 seconds of the "Zukunft Pink" video and a reference to the publication via the Seeed newsletter.

Fox has just been on tour successfully with his band Seeed. In their hometown of Berlin alone, the musicians played eight enthusiastically acclaimed concerts in front of around 150,000 fans and as the main act at the Lollapalooza Festival. 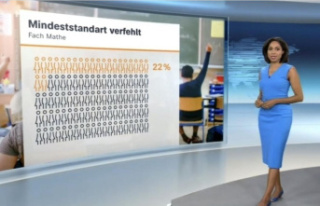 News broadcast: ZDF made a spelling mistake in the...