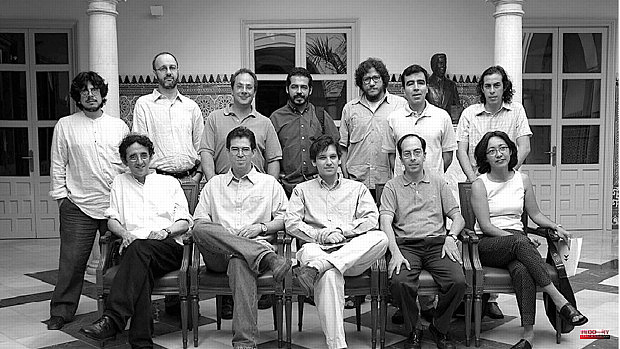 They are twelve, like the apostles. Posing before the camera with a solemn gesture: Fernando Iwasaki, Rodrigo Fresán, Ignacio Padilla, Santiago Gamboa, Jorge Franco, Iván Thays, Roberto Bolaño, Edmundo Paz Soldán, Gonzalo Garcés, Jorge Volpi and Cristina Rivera Garza. They all have in common having been born in the Latin America of the sixties. They all write. Many are not known yet, but they will be. The black and white portrait was made at the Lara Foundation during the Meeting of Latin American Authors promoted by Seix Barral in 2003. That was twenty years ago. The family photo remains frozen in time like a prediction.

Two decades after that photograph, in Madrid, nearly 40 writers from Latin America and Spain have gathered at the First Meeting of Ibero-American Letters, the first activity with which the writer Jorge Volpi launches the Center for Mexican Studies UNAM-Spain, for which he is responsible.

The call no longer falls, unlike that meeting promoted by Seix Barral, in a publisher but in the Autonomous University of Mexico and the Carlos Fuentes Chair.

This spring, Madrid has hosted several meetings of this type. Ibero-American authors seek their place to rethink the literary and promote the encounter with Spain. From the Central America Account Festival, organized by Sergio Ramírez, which recounts the visibility of the new literary generations marked by migration, exile, impunity or the emergence of the feminine until this congress promoted by the Autonomous University of Mexico where many of these themes reappear. The Spanish capital plays the role of that Barcelona of the Boom that welcomed García Márquez and Vargas Llosa under the aegis of Carlos Barral or Carmen Ballcels. Things have changed and yet one thing remains the same: the need to recognize oneself.

Although they are now more in number and visibility, Latin American writers still feel far from Spain and, as in that meeting in Seville, they meet with the same impetus as in the 1990s. «This meeting recovers the spirit of that congress convened by the Lengua de Trapo publishing house in Casa de América, in 1999, and from which the anthology 'Aerial Lines' came out. Also from that other one, in Seville, in 2003 where Roberto Bolaño and Cabrera Infante met. Then Bolaño had won the Rómulo Gallegos with 'The Wild Detectives', but his books were barely reviewed in the Spanish press », explains Jorge Volpi, who in those years had won the Biblioteca Breve with the book 'In search of Klingsor '.

“Things have changed a lot since then. In the anthology of short stories by McOndo organized by Fuguet or in 'Aerial lines' there were no female authors. Today there is a hegemony of writers. There are very good ones, from different generations: those born in the sixties, the seventies and the late eighties. So they were not visible. Fernando Iwasaki points out a reality that obviously comes to life in each and every one of the tables that he has organized together with Jorge Volpi and Alexandra Saavedra Galindo, head of the Carlos Fuentes Chair. The world has changed, of course, however, the relationship between Spain and Ibero-American writers continues to have a sea in between. It's time to get closer and make yourself visible. And that is clear in this I Meeting of Ibero-American Letters 2022.

The conferences that will take place until June 15 at the Fundación Casa de México, in Madrid, review what Volpi and Iwasaki defined as "State of the art": a review of the narrative, the essay and the dramaturgy that is written in Latin America and communicating vessels with Spain. Authors such as Santiago Gamboa, Juan Villoro, Cristina Rivera Garza, Gioconda Belli, Jordi Soler, Héctor Abad Facciolince or Rosa Montero have participated in these tables, as well as younger representatives such as Selva Almada or María Fernanda Ampuero, who introduced a generational shock to the debates. «My literature deals with the violence of the society where I grew up, Ecuador: family, racial and linguistic violence. Cultural violence against women and indigenous people”, Ampuero defended at the table on Memory and literature, in which the different perspectives of the weight that the conflict has in Latin American literary production were debated.

"There is a clear difference between the literature that is made in Spain and that of Latin America," points out the Mexican writer Rosa Beltrán, responsible for the cultural programming of the UNAM, one of the mother institutions of this meeting. «In Latin America we write about what presses us and in Spain it still has a more retrospective, historical relationship of its themes», she describes at the time of remaking a map of the Ibero-American set. The debate on the state of the literary question in Ibero-America points in that direction: violence, corruption and impunity are still as present today as they have been in the last twenty years in the most significant literary works, with the difference that now It includes other approaches: a more visible presence of women, reflection on other forms of violence and a more flexible relationship with tradition. Unlike the Crack generation or the writers of the nineties, the Boom is not a slab.

When Santiago Gamboa arrived in Europe, publishing in Spain was practically an epic and explaining his literature involved explaining that he did not write like García Márquez or Borges, but as himself. "When I sit down to write, I don't wear a Colombian shirt," the author of 'The Ulises Syndrome' jokes ironically in a conversation with the Peruvian Fernando Iwasaki, for whom the role of publishers in the process of shaping a reading and literary community. “To whom I owe my relationship with literature is the publishers, Alianza's pocket books, the Fund for Economic Culture, Zig-Zag in Chile. They, and Mordinzki's photos, have united authors from Latin America and Spain”, explains Iwasaki with a laugh.

This Meeting of Ibero-American Letters has a spirit of vocation and permanence, as ratified by its manager Jorge Volpi and formulated as a wish by the editor Pilar Reyes, literary director of Alfaguara and Lumen, two of the historical and fundamental stamps to share a literary map of back and forth in Latin America. "We want this meeting to continue and we will support it so that it does," says Reyes. Twenty years after that Sevillian photo, things have changed. Roberto Bolaño, Ignacio Padilla, Luis Sepúlveda have died. A pandemic has shaken the world. Hyper-connection, the Internet and networks have changed everything, although other issues remain intact: violence in Latin America and a still remote relationship with Spain, despite the more than 600 million speakers who share both territories. "Latin America is not an anachronistic category and we must keep this in mind and ask ourselves why," said Venezuelan writer Rodrigo Blanco García at the "Remember Latin America" ​​table, organized by ABC Cultural at the Madrid Book Fair. "What was the Barcelona or Paris of the Boom, is now Madrid. It has become the great meeting place."

1 The great Israeli writer Abraham Yehoshua dies at... 2 Report: Dalton Schultz will attend the Cowboys minicamp... 3 The Book Fair recovers from Covid with record figures:... 4 Travon Walker aims to break Josh Allen's Jaguars... 5 Ron Rivera: Jack Del Rio’s comments became a distraction... 6 Ron Rivera believes that Terry McLaurin and Terry... 7 They investigate the construction of buildings in... 8 The City Council will distribute water and fans to... 9 The Palomarejos commercial park in Talavera was evicted... 10 The heat wave reaches the north: Temperatures up to... 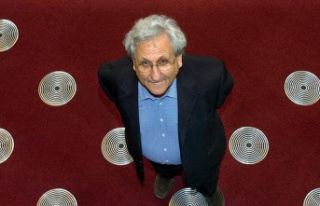