A magical space for a kitchen of many carats. 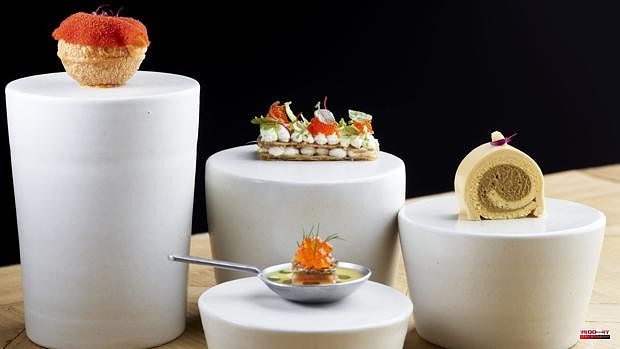 A magical space for a kitchen of many carats. El Cigarral del Ángel is the oldest of those that dominate Toledo, and probably also the most beautiful. Iván Cerdeño settled there three years ago, one of the most talented chefs of that generation who is beginning to take over the most prominent positions on the culinary ladder. In this cigarral, the man from Toledo has achieved the calm necessary to develop his enormous potential, rewarded this year with a more than deserved second star. A new visit has served to confirm that Cerdeño has achieved a maturity that will undoubtedly take it much further.

From the windows of the restaurant's dining room, the spectacular capital of Toledo constitutes a background landscape that reinforces the magnificent sensations of the diner while enjoying one of the two tasting menus (110 and 145 euros) that are the only alternative in this house.

There is another menu, on Thursdays and Fridays at noon (80), but, as Iván himself tells me, his days are numbered. Cerdeño defines his cuisine as Toledo. Proximity cuisine that takes advantage of the orchards of the Tagus and the resources of the rich environment, but without being closed to the outside. Cuisine that delves into old local cookbooks in an interesting piece of research and that seeks its identity through the flavors of memory. From all this arise dishes of a high technical level, elegant and tasty.

Vegetables and game predominate on the menus. Cerdeño is one of the great Spanish specialists in hunting cuisine, which shines more in autumn and winter, but which is now summed up in complex but perfectly resolved preparations such as the sardine stuffed with red partridge, inspired by a recipe from El Practicón, or venison with barnacle vinaigrette. Within an outstanding menu, the first part shines with its own light. A succession of refined bites, from bean tatin or cucumber with herring to asadillo or green pepper pâté and salted fish.

They are followed by magnificent things such as crayfish curd, roasted tomatoes with cottage cheese and herb soup, tender almond marinade or baby eels (frozen in season) and eel with blancmange and spice juice, to name a few. just a few. With the salty finish of an impeccable royal duck, and the final point of desserts at the height of the dishes that precede them, especially the cherries with ginger and roasted milk with palodú. One of the best menus that whoever signs this has tasted in the last year. And they are enough.

Important is the efficient and professional work in the room of Annika García-Escudero, Iván's wife, well reinforced in recent months by the sommelier Maikel Rodríguez Cortina. They manage a category winery, at the height of the kitchen. Iván Cerdeño is an essential restaurant.

The best: The menu as a whole.

1 A Geria wine to commemorate the centenary of Saramago 2 Don Juan and Segismundo, axes of the season of the... 3 The auction of Velintonia unleashes the war between... 4 They rescue from the Valdecañas reservoir a singular... 5 Manuel Agujetas: the Bukowski of flamenco singing 6 The Government declares Nativity Scenes as a Representative... 7 The new Latino Museum in the United States reduces... 8 Sónar starts rolling in search of lost time (and... 9 Azkena and Sonorama, two great anniversaries between... 10 The PP asks for explanations for the participation... 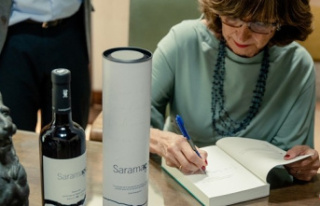 A Geria wine to commemorate the centenary of Saramago