HELSINKI -- Norway announced Saturday that it would conduct an independent investigation into police and security agency actions following a bow and arrow attack in which five people were killed and three more were injured. The police were criticised for not reacting quickly enough to stop the massacre. However, the victims died after the attacker was first discovered by police. HELSINKI -- Norway announced Saturday that it would conduct an independent investigation into police and security agency actions following a bow and arrow attack in which five people were killed and three more were injured. The police were criticised for not reacting quickly enough to stop the massacre. However, the victims died after the attacker was first discovered by police.

Norway's domestic intelligence agency (known by the acronym PST) said that it had decided to request the review after consulting with its national and regional police commanders regarding Wednesday's attack in Kongsberg.

PST stated in a statement that "Given this seriousness of the matter it is very important to learn points and any weaknesses or errors quickly to be able implement measures immediately."

Norwegian media question the time it took for officers to capture suspect Espen Andersen braathen. This was after reports surfaced that a man had shot arrows at a supermarket. According to police, the initial information about the attack was recorded at 6:13 p.m. Andersen Braathen was captured at 6:47 pm.

According to police, the suspect was initially seen by the officers who arrived on the scene but fled. Officials have confirmed that the suspect fled and likely killed five victims aged 52 to 78, both outside and within apartments.

Norway is one of a few countries where law enforcement officers are not required to carry firearms, but they can access other weapons quickly depending on the circumstances. According to authorities, the police were not armed in their first encounter with Andersen Braathen and they were armed in subsequent encounters.

According to authorities, one of the injured was an off-duty officer who was struck in the supermarket. All other wounded were released from the hospital.

Police knew about the alleged attacker before the attack. Norwegian public broadcaster NRK reported in 2015 that PST security officers received information about Andersen Braathen. Agents interviewed him in 2017 in order to determine if he posed a danger. The agency contacted Norwegian authorities regarding him the following year and found that he had a severe mental illness.

The VG newspaper reported that Andersen Braathen was being considered by the agency to carry out a "low scale attack in Norway using simple means." PST declined comment.

Police stated Saturday that they believe the suspect's mental illness was the cause of the attack. Andersen Braathen's claim that he converted to Islam was no longer an important line of investigation.

"He has stated that he converted to Islam. Although it's a hypothesis, it's also possible that he hasn’t converted to Islam. "The investigation so far has shown that he didn't do this (converting), seriously," Per Thomas Omholt, police inspector, said at a Saturday news conference.

Omholt stated Friday that three weapons including the bow and the arrow were used in the attack. However, he declined to identify them further or disclose how the victims died due to ongoing investigations.

NRK was told by a spokesperson for Norway's Muslim Community that the police should not have published the self-proclaimed conversion of the suspect to Islam as they did on Thursday.

Waqar Dar said to NRK that it hurts and is very painful. "There are many young Muslims who write me to complain about a bad feeling. They love Norway, but they feel that they aren't loved back.

Emilie Enger Mehl (Justice Minister) assumed the role on Thursday with the rest of Norway’s center-left government. She has not yet commented on how the police handled the attack.

She told SVT, the Swedish public broadcaster, that "now it is important for the police to get a review of the matter and investigate thoroughly."

Norwegian media reported that several of them were part Kongsberg's vibrant artists' community. NRK described Englund, a respected potter and artist who owned a gallery and lived at Kongsberg. Madsen was an independent painter, while Borge served on the boards of local non-profit art organizations.

Sauve was a long-standing local judge, and he also worked earlier for Norway's environment ministry. According to NRK, he was Borge's partner. Meyer moved to Norway several years ago from Germany. 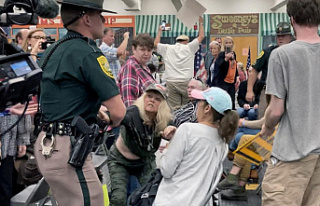