Dua Lipa, from millennial diva to global star at the Palau Sant Jordi

An eighties fit card, plenty of neon, a kingsize dance pole that Olivia Newton John would have fallen for and, in the center, pure nerve and bubblegum pink costumes, Dua Lipa. 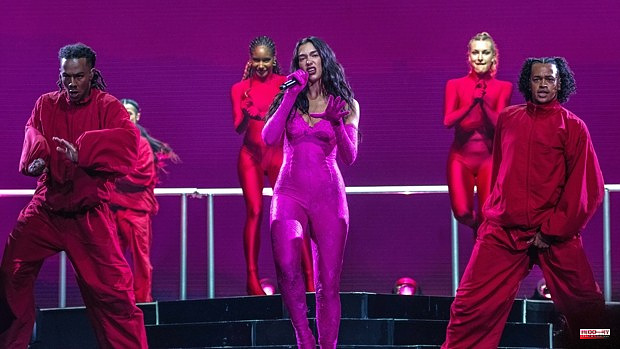 An eighties fit card, plenty of neon, a kingsize dance pole that Olivia Newton John would have fallen for and, in the center, pure nerve and bubblegum pink costumes, Dua Lipa. The millennial diva, a new high-flying pop star, just one step away from becoming a global star. «Come on, let's get physical», she orders her more than she sings escorted by a dozen dancers. And the Palau Sant Jordi, of course, obeys. And she gets physical. And go crazy. Or something like that. Because it is not a matter of going against him either.

Okay, it came out late and the audience had to entertain themselves doing the wave or rocking to the rhythm of Moloko's 'Sing It Back', but what are fifteen minutes of nothing when the audience has been waiting for this moment for two years? Two long years of waiting and two postponements, from 2020 to 2021 and from 2021 to 2022, after which, now, the British has finally landed in Barcelona to present 'Future Nostalgia'.

So, "come on, let's get physical", not even to unholster the mobile and not lose detail. The occasion deserves it.

This is how the first stop of a tour that, after passing through Madrid, will return to Barcelona to climb to the top of the Primavera Sound lineup on June 9, kicks off, in style and with throats to the limit. If the production is the same, the rest of the artists on that day would do well to stay in the dressing room. Because everything in this 'Future Nostalgia Tour' is designed to overwhelm. To go over the public and go out on the shoulders through the front door. From 'New Rules' to 'Love Again' and from 'Cool' to 'Pretty Please'. From the gigantic mirror ball that is projected on the screen to the juggling skaters. No breath. Without (almost) unnecessary pauses, here is the spigot that many needed to release accumulated tensions. "I knew it would be fun, but I didn't know it would be crazy," she finally says when, after a hectic first half hour, she pauses for a few seconds to catch her breath before rescuing 'Be The One'. And she falls. Or she pretends to trip and fall. Because it is also a coincidence that she slips just at the same time as a couple of days ago in Milan. So we continue.

With 'We're Good' comes the first costume change, but all eyes are on a giant lobster appearing onstage. Yes, a lobster. Don't ask. By the time 'Good In Bed' drops, it's gone. Seen and unseen. A stage prank to match the tiny hearts of 'Break My Heart' that ends up crushed by the impact of 'Boys Will Be Boys' and the electronic reel of 'One Kiss'. Sant Jordi turned into a gigantic nightclub and all the dancers huddled together on the secondary stage.

There are the elastic and rubbery basses, the shavings of Giorgio Moroder, the retro-futuristic nostalgia in its proper measure, the arsenal of adhesive anthems... There it is, well thought out, everything that can be asked of a pop concert in the 21st century . A concentrate of hits with a view to the future and fiery celebrations of life through gymnastic dance. Theory and practice of stadium pop in its most euphoric and communal version.

The British actress doesn't even need to abuse stage pyrotechnics or special effects: all she has to do is throw a 'Hallucinate' down her throat for which Madonna would have killed fifteen years ago, invoke Elton John in 'Cold Heart', fly (literally) with 'Levitating' and throw in the rest with 'Future Nostalgia' and 'Don't Start Now' to embroider an elegant montage and certify its transformation into a planetary impact supernova.

1 Messi guides the triumph of Argentina in the 'Finalissima'... 2 The Rolling Stones' Ultimate Immortality Lesson 3 Ruud defeats young Rune and will play Cilic for the... 4 Don PX Cosecha 2019: the emblem of the winery 5 Italian restaurants for all pockets 6 Is Tetuán called to be the new Carabanchel of art... 7 Coach Crys Dyaz shares her favorite spots in Madrid 8 The new luxury shopping center in Madrid, the best... 9 The WiZink 'vaccinodrome' closes and the... 10 Seven new elevators and other improvements for the... 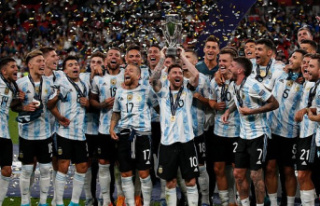 Messi guides the triumph of Argentina in the 'Finalissima'...