Almadraba bluefin tuna: how to distinguish, cut and cook each of its parts?

Yes, there are those who believe that 'almadraba' is a geographical indication for bluefin tuna. 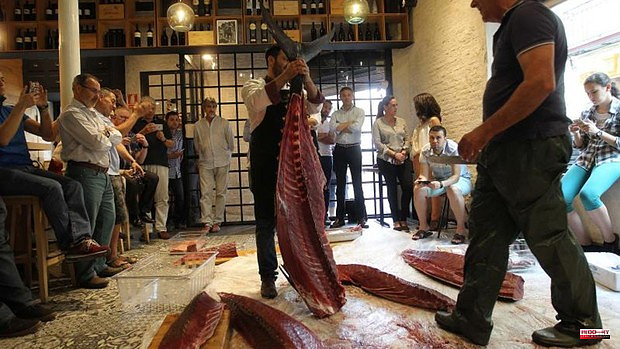 Yes, there are those who believe that 'almadraba' is a geographical indication for bluefin tuna. A kind of seal of quality –certainly, it is– that has nothing to do with the way in which these 'critters' –Thunnus thynnus by its scientific name– are captured on their routes to the warm waters of the Mediterranean Sea. The art of fishing that defines this term, of Arab etymology and whose literal meaning is "place where it is hit" –nothing is further from reality today–, is as unknown as it is ancient.

It is said by those who have spent a good part of their lives working and defending a form of fishing that traces its origins to Phoenician times and that implies the current sustainability.

"Less than 1% of the tuna that passes through the Strait is caught," Andrés Jordán, manager of Gadira, a company that supplies chefs such as Dani García –Lobito de Mar or Dani Brasserie, among others– or Bittor Arginzoniz, tells ABC. Etxebarri– and iconic spaces in the area such as El Campero by Julio Vázquez. Gadira is responsible for three of the four authorized traps off the coast of Cádiz: Zahara de los Atunes, Conil and Tarifa. The fourth, from the Petaca Chico house, is in Barbate. They are not the only ones in Spain: in La Azohía (Murcia) is the last in the Mediterranean.

The large tuna that return to spawn after spending the winter devouring anchovies, sardines or mackerel in the cold waters of the North Atlantic do so every spring. You never know exactly when – the season officially started on April 20 and will end in the next few days. Experience and some popular wisdom makes the older ones anticipate the arrival based on the weather. “Wind of tuna”, say those who are already retired, foretelling the work of hundreds of families – half a thousand direct jobs in season – who live thanks to this miracle of nature that Japan looks at with envy as one of the strongest importers.

The almadraba does not use any great technological means to capture the tuna. Thousands of meters of steel cable, nets, floats and intricate structures guide and divide the school of tuna towards the end of the structure – whose complexity is explained below – as if it were a labyrinth that only lets those who do not escape. they are the right size. A concern that avoids depleting the species as happened decades ago with illegal and furtive catches. Today there are some quotas –1,070 tons for this year– and not all the tuna that enter are slaughtered.

Tuna is the red gold of the sea and is an example of its use. "It is said that from the pig to the walk and from the tuna to the swim," Jordán explains to ABC. To understand the complexity of butchering a tuna, it is best to attend a live ronqueo.

Chefs like Dani García have taken this show to places like Dubai or Madrid, where he recently gave a master class on the uses and applications of different parts in the kitchen with the help of the Cadiz tuna fisherwoman. The pull of this product –which has increased its price by 20% this year as a result of geopolitical instability– is also reflected in the birth of specialized spaces such as Tatún, in the San Miguel market in Madrid.

"The tuna is already prepared here so that it arrives perfectly, deep-frozen at -60º to stop bacteriological activity, preserving all its properties and flavour," he explains. Its quality is 'sashimi', that is, the best to consume raw according to Japan. Although not all cuts are interesting to consume without cooking. The form of sacrifice is also very important.

"The infiltration of fat from each of the parts of the tuna is key," says García. The ventresca –'toro', 'otoro' and 'chutoro' for the Japanese or ijada for the people of Cadiz–, for example, is one of the most prized parts raw, for sushi, although it works grilled and over hot coals. Lean, the loin, is also valued by the 'itamae' for its preparations. Part of it, known as 'tarantelo' –the closest to ventresca– is perfect for onions –in 'colorao', in the style of chef Julio Vázquez–, in ceviche or in 'tataki' –both are in the proposal by Damián Ríos at DeAtún, in Madrid–. Also grilled, as they prepare it at Madrid's Kulto by José Fuentes and Laura López, forged as chefs in Cádiz.

The discharge, the inner part of the loin, is much appreciated for tartare or for marinating –in BiBo, for example–. Viscera like the heart have their place in the kitchen. At Zoko, with stores in Madrid and Zahara, they use it salted for their croquettes. Also the roe, the milk ones –from the males– and the grain ones, which are served cooked in Surtopía together with other select cuts of the head such as the mormo or the facera. The crop – known as tuna tripe – or the liver are also used.

1 Immigration and gender: a double discrimination 2 Record Reviews of the Week: Moby, Malamute, Liam Gallagher... 3 Texas police: Texas teacher propped-opening door before... 4 After Uvalde, holiday weekend sees shootings nationwide 5 EU ban on Russian oil could be weakened by high prices... 6 As nation worries, Biden plans to fight inflation... 7 Cyber agency: Some states are vulnerable to voting... 8 A Clinton 2016 Campaign Lawyer was acquitted by the... 9 Experts: It's another busy hurricane season,... 10 Depp-Heard trial verdict not yet reached; jury will...

Jungle camp 2023: Only one was temporarily dangerous for Djamila Rowe: That's what the viewers voted for

Infidelity: 10 curious facts about cheating in a relationship 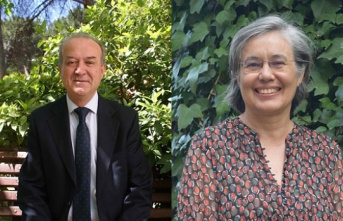 Immigration and gender: a double discrimination