Alejandro Sanz, in top form, overflows with energy at the Wanda

Two years have passed since he was forced to cancel his tour of Spain due to the health crisis. 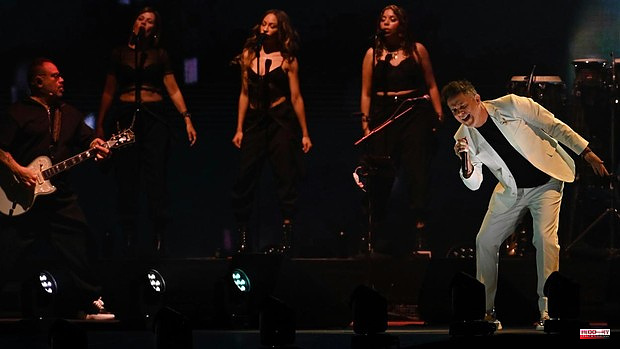 Two years have passed since he was forced to cancel his tour of Spain due to the health crisis. So it has been a long time that his followers have waited to see Alejandro Sanz on stage. The 'Sanz en vivo' tour, which will take him throughout Spain this month and the next, began last night at the Wanda Metropolitano. There was desire, it was noticeable in the atmosphere although the venue was not filled. Especially for the fans of the Madrid singer, some of whom had been queuing for a week at the stadium to be the first. It's what having a 'broken heart' has to do with waiting so long, that makes you do something crazy. And Sanz had already shown his gratitude on social networks: «To the people who have been lining up since last Saturday for this Saturday's concert at the Wanda. I eat the soul. There is nothing to pay for that. I give up my life."

And it seems that it was so because the artist began the performance after 10:40 p.m. and did not slow down in the almost two hours that the show lasted. The first of the 'Sanz live' dates opened to the rhythm of 'It's not the same', chanted loudly by the attendees. Dressed in white, he later sang "Everything I Was" and "Let me kiss you", the latter with the guitar already on his shoulders. Then came the time to aflamencate the night with the piano and a cajon, but they were just a few notes, a hint of what would come later, because the singer started off with a 'medley' of some of his lyrics like 'El alma al air', 'Give me the chair where I waited for you', and 'Today it rains, today it hurts'.

"Goodnight. What thing. I've been thinking for a long time what I was going to say but now I have no fucking idea. Tonight we are all from Madrid. And if the world ends tomorrow, it doesn't matter, because today I'm in Madrid," said the singer and the audience went crazy. But he didn't slow down. 'Since when,' Looking for paradise 'and' Mi marciana 'continued playing in this tribute to some of his most recent hits. It was a tribute to his entire career, because in the Wanda all the interpreter's followers chanted, who, like the artists who can be described as veterans, already concentrate several generations among their fans. And it is that last night there was no song that was not sung loudly. Besides, if you blinked, you missed it. Because the themes were chained relentlessly. And in this reunion with the Spanish public there was room for more recent lyrics such as 'Mares de miel' and, above all, for a trip full of nostalgia thanks to 'La Fuerza del Corazón' and 'Siempre es de noche'. All the songs alternated, from the present to the past, from 'Iba' to 'When nobody sees me', in a demonstration that the artist is still in top form.

The first notes of 'Amiga mía' showed that her most emblematic album, 'Más', continues to arouse passions. With 'My favorite person' she premiered the catwalk to approach her most faithful followers, stationed in the first rows.

Later the more danceable rhythms returned with 'Labana' and the burst of energy with 'Corazón partío'. The concert was drawing to a close. 'Today you're not here' sounded and the attendees experienced a real party, which seemed to end. But it was not like that. And although he said goodbye, Sanz returned to the stage. "Just kidding," he said again on the guitar. Calmer, he sang 'Living fast' and, already at the piano by himself, in tribute to his godfather Manuel Alejandro, with 'And I already loved you'. He kept hitting the key with 'Do you see it?' And 'My loneliness and I' came, 'She' and he said goodbye with 'This last moment'. A shower of confetti ended the concert. The energy had already overflowed.

1 Plans in 'urban oases', the best way to... 2 An American group proposes a new 'Eurovegas'... 3 The new life in green of the last unused mansion in... 4 Officials say that a gunman accused of killing a retired... 5 Where did Marcos Llorente go? 6 Nick Cave, between heaven and hell at Primavera Sound 7 "Spain is a machine, but we want to play" 8 The classic books that cannot be missing in the library... 9 The portraitists of Queen Elizabeth II, the most photographed... 10 From sculptures of Tutankhamun, maps of natural parks,... 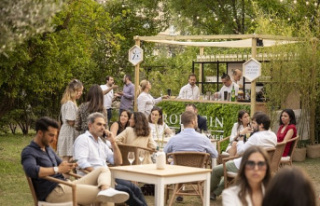