A Geria wine to commemorate the centenary of Saramago

The winery is built on what was the eruption of the volcano, the black and fascinating terrain that César Manrique made famous and loved despite meaning destruction. 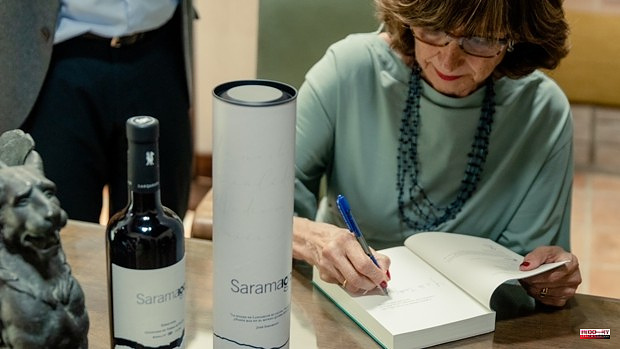 The winery is built on what was the eruption of the volcano, the black and fascinating terrain that César Manrique made famous and loved despite meaning destruction. José Saramago and his wife, the journalist Pilar del Río, landed on this island of Lanzarote back in the 1990s and they stayed here until the Portuguese Nobel Prize winner gave him his last breath.

This year of commemoration of the centenary of the writer of 'Essay for blindness', tributes and thanks have been rushed, and his island, the one that said that "it was not his house, but his house", has also wanted to remember him, but in this case with something that is as characteristic of these volcanic lands as the wine, the one that grows in La Geria, on those terraces that cradle the vines and protect them from the winds.

Bodega El Grifo is one of the ten oldest in Spain, and the oldest in the Canary Islands. It was born in 1775, and the current family, headed by Fermín Otamendi, knows very well what it is to pay homage through wine, not in vain they already made a commemorative edition of the revered Canarian artist, César Manrique, also on the occasion of his centenary. On that occasion it was a Malvasia white, but for Saramago's centenary a red has been chosen.

“It is made with a variety of grapes called Syrah that we have introduced in Lanzarote and that has adapted very well to this land, it does not require a lot of water and it has settled well with the land. Like José Saramago, he was not from Lanzarote but he adapted here like no other and loved this island. We wanted to choose a long-lived wine«. The bottle, which goes in a case, contains information about the writer as well as images of the same, in a kind of hidden poem.

In the presentation, the writer's wife, Pilar del Río, president of the Saramago Foundation and who has opened her island house for years to visitors interested in the Nobel's work, as well as the library that is built next to the house. «For us, this form of commemoration is an honor, because wine is also Culture and, furthermore, it is a winery that has a library and that Saramago visited. This island is not big, but it is deep, it is in its manifestations and aesthetics and in its way of understanding values«.

The wine, which is exclusive to this commemoration, has a special, numbered and unique 'run' of 12,000 bottles, made with a traditional production. On the bottle the signature of the Portuguese writer.

Fernando Gómez Aguilera, president of the César Manrique Foundation, said at the presentation of this tribute that "Culture, if it is not generous, is not Culture", also referring to the book that was presented on the afternoon of June 15 at the César Foundation Manrique de Lanzarote written by Pilar del Río and entitled 'La intuición de la isla. The days of José Saramago in Lanzarote' reveals as a story the episodes that happened in the Nobel's house, "in that house, he said, which was a cultural embassy, ​​a house with open doors, as was the magical realism of Saramago . It is a book that increases the material heritage of the house«.

The book, according to its author, "is for readers and friends of José Saramago who want to know more about the reasons that led him to Lanzarote and made him create the books he wrote here, from 'Essay on blindness' to the plea against the war that is 'Halberds'. They are small chronicles about domestic uses, friends who came to the island, taking a position on social or political problems and narrated from the emotion of closeness«.

Edited by Itineraria, a small publisher from Lanzarote, it is being translated into Portuguese and will soon be published in Brazil, Portugal and Latin America. According to Fernando Gomez Aguilera, "it is a book that over time will become essential to approach the work of José Saramago".

The music, the aridity of the land, the wind are also protagonists of these stories along with the trips that Saramago made around the world of which he brought back memories, among them some curious stones that today can be seen in his office under an urn of glass, along with his collection of pens and inkwells. «José Saramago gave a conference in Italy that he titled 'From the statue to the stone'. There he said that even the 'Gospel according to Jesus Christ' was as if he had tried to describe a statue. After that book, perhaps because he lived in Lanzarote, perhaps because of his observation of the world, he was no longer interested in the statue as much as the stone from which the statue was made”, recalls Pilar del Río.

1 Don Juan and Segismundo, axes of the season of the... 2 The auction of Velintonia unleashes the war between... 3 They rescue from the Valdecañas reservoir a singular... 4 Manuel Agujetas: the Bukowski of flamenco singing 5 The Government declares Nativity Scenes as a Representative... 6 The new Latino Museum in the United States reduces... 7 Sónar starts rolling in search of lost time (and... 8 Azkena and Sonorama, two great anniversaries between... 9 The PP asks for explanations for the participation... 10 The emotional video in which Manuel Carrasco dedicates... 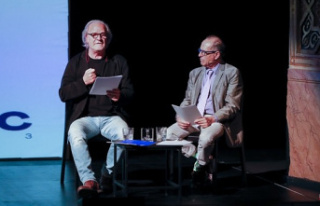 Don Juan and Segismundo, axes of the season of the...