Von der Leyen get solid support for its EU-Commission

A majority in the EUROPEAN Parliament have paved the way for the next EU Commission may take over 1. december. Ursula von der Leyen, has on Wednesday received 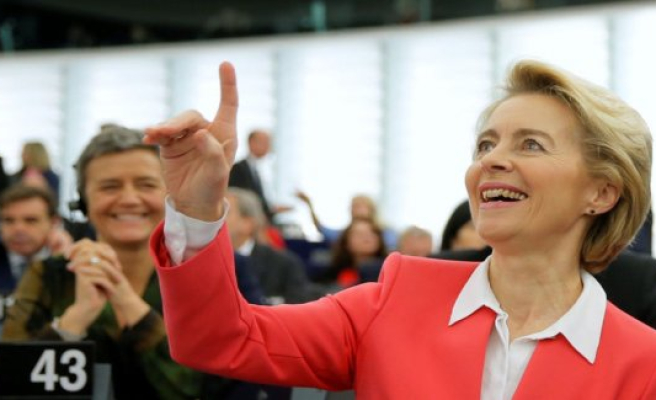 A majority in the EUROPEAN Parliament have paved the way for the next EU Commission may take over 1. december.

Ursula von der Leyen, has on Wednesday received the green light from the European Parliament.

The next president of the EUROPEAN Commission and the 26 commissioners can take hold of the work 1. december - a month later than planned.

Von der Leyen, who must stand in the forefront of the EU-Commission without a british member, should use a simple majority vote in the EU Parliament in Strasbourg.

She's got a very robust mandate. 461 of the EU Parliament members voted in favour of the EU Commission, while 157 voted against. Thus, the support larger than that of its predecessor, Jean-Claude Juncker. He's got 423 votes.

the Members of parliament voted on the EU Commission a little after dinner, after the EU Parliament all the morning had discussed the forthcoming EU-Commission plans. At first, Ursula von der Leyen, a keynote speech on his priorities.

It was expected that von der Leyen would secure a majority, since all the candidates had been through a consultation process, and some candidates were eliminated.

Before the confirmation was the the celebrations, however, exposed by a short alvorsstund. One member of parliament stood up and asked everyone to remember the three fallen soldiers in Mali.

However, the president of the EUROPEAN Parliament, David Sassoli, rejected the forgetful or ignorant member with regard to Tuesday had held a minute's silence for the three frenchmen.

Jean-Claude Junckers mandate expired 31. October, and the plan was that Ursula von der Leyen to take over 1. november.

But since she lack to get pre-approved several commissioners in connection with the prior consultation process in the EU-committees of the european Parliament, may the start date be postponed.

in Addition, there was long a doubt about what you have to put up with the united kingdom, who want to leave the EU, but have not yet managed to make the seriousness of the plans.

Of the EU treaty states that all member states must be represented in the EUROPEAN Commission. But the british government has refused to set a candidate. It has the other EUROPEAN countries accepted.

on Monday this week the member states approved the so the list of commission candidates, which is a prerequisite for the EU-Parliament vote on the EU-Commission.

1 The audience screamed with laughter, before Boris... 2 The world's best sushi restaurant lose all three Michelin... 3 Woman killed by horde of wild pigs in Texas: 'one... 4 Thanksgiving with the wind in the back: So popular... 5 Malmö-fan after Zlatan-bomb: 'the Statue means nothing... 6 Game apple experiment went viral - but experts are... 7 The police are allowed to put gps on the non-suspect's... 8 Dry summer was given agriculture to use the 71 percent... 9 There are still a number of disagreements about the... 10 Many patients lack the means to life after cancer The audience screamed with laughter, before Boris...