Prime minister Mette Frederiksen has a much better relationship with president Donald Trump than several of the other western leaders. "I have a good and pos Prime minister Mette Frederiksen has a much better relationship with president Donald Trump than several of the other western leaders.

"I have a good and positive impression of the president - we are swinging good," said Mette Frederiksen, just after she Wednesday afternoon met with the president of the UNITED states at the Nato summit, north of London.

Trump delivered during the summit snarky comments to the leaders of both Canada and France, but the conversation with Frederiksen flow according to her, in good tone.

Mette Frederiksen had in advance a plan to meet the needs Trumps wants increased european efforts to advertise an increased Danish military focus on the Arctic.

concretely, the prime minister redistribute 1.5 billion. kr. of the Defence budget to strengthen the Danish effort in the area, and will the UNITED states, as well as Greenland and the Faroe islands, be involved in a collaboration.

in Addition, the promised of Wales, to Denmark in the future will make four fighter aircraft additional available for forsvarsalliancen in 2020 and 2021.

Thus, Nato can get the help of a total of eight Danish fighter aircraft in the next two years.

the Summit in Watford, north of London, marked the 70 anniversary of Nato, but the celebrations were overshadowed by bickering among especially the male managers.

It is due to a video recorded at a reception on Tuesday evening at queen Elizabeth at Buckingham Palace.

Justin Trudeau was busy in conversation with the british Boris Johnson and the French Emmanuel Macron, where he referred to Donald Trump suddenly held an unannounced press conference before the Trumps meeting with the canadian leader.

"I saw on his delegation, who just lost jaws," said Justin Trudeau on Trumps embedsstab.

the Video quickly spread in the media on Wednesday, and Donald Trump could not restrain themselves in order to give again.

"He speaks with two tongues," said Trump about the canadian prime minister, and chose to cancel a scheduled press conference Wednesday afternoon.

It was not the only quarrel, Trump got out.

on Tuesday, he described the French president Emmanuel Macrons opinions as 'soggy'.

France's president had described Nato as being brain dead, and it was, according to Trump the expression of a lack of respect for the forsvarsalliancen.

Outside the luxury hotel The Grove and its associated golf courses, there was a different peaceful in spite of a reported demonstration against Nato and the Trump.

the Police had fenced off a large area on the golf course for the protesters, but they had to wait a long time to get something to do. An hour in the demonstration was only five turned up.

"We had expected more," said the constable Lucy. A second cop told him that he had played cards with his colleagues, the last two hours in a politibus.

In total met with around 30 protesters up. One of them was 46-year-old Loveday Hodson-Little from Watford.

With a sign with the text ‘This pussy roars!’ she would allow Trump to understand that he was not welcome here.

"I can't understand how a man who was known to say 'grab them by the pussy', can be the leader of the free world," said the proclaimed feminist.

The local var in the run-up to the meeting have been invaded by the police, who search the area with dogs, and sent the divers in the canals around the hotel.

the Hotel and The Grove is known for its excellent golf courses, and the former leaders of the UNITED states and the united kingdom, Barack Obama and David Cameron, have played golf together here.

on Wednesday aired the local their fear that golfentusiasten Donald Trump after his visit at the hotel has gained the interest of the site.

1 The Origi thank Jürgen Klopp for the trust after... 2 39-year-old elephant dies at Zoo after short illness 3 Blue snowsuit created fierce debate: 'really, seriously,... 4 Stine waited in vain at the baggage: 'We got nothing... 5 Rescuers search for victims under the collapsed building... 6 Danish swimmers misses the finals on the first day... 7 Århus takes strong victory at BSH and, at the endgame 8 Agency acknowledges mistakes in the citizenship test:... 9 Two are killed by gunfire at Pearl Harbor a few days... 10 Person arrested for the killing of Emilia Lundberg 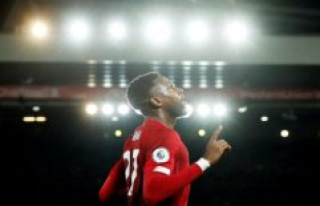 The Origi thank Jürgen Klopp for the trust after...