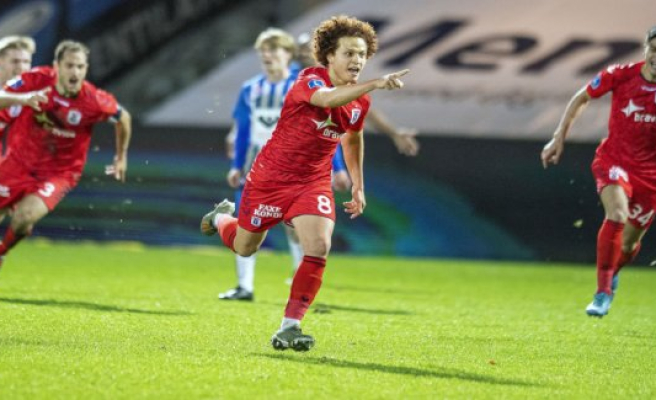 Deep in injury time got the AGF's Mustafa Amini scored sejrsmålet, since the AGF after a 2-1 away win over Esbjerg.

In a corner kick deep in injury time downloaded AGF all three points, as aarhusianerne Sunday after a 2-1 away win over Esbjerg in the 3F League.

Esbjerg had equalized to 1-1 ten minutes before, but it was the guests, who at last could rejoice in the fourth ligasejr in a row.

It became a reality when Mustafa Amini in the 93. minutes hammered the ball into the goal from distance.

Mustapha Bundu scored the AGF's first goal in the beginning of the first half, while the substituted Patrick Egelund equalized for Esbjerg with its first superligascoring.

the Victory was particularly welcome to the AGF, which is thus swept past the Brøndby in third place.

AGF has after the victory of 32 points, while for Esbjerg was something of a cold cloth on the face, and Esbjerg has thus still 13 points as the penultimate.

Already after nine minutes came the AGF in the front.

A throw was poorly cleared by the Esbjerg defense, and Mustapha Bundu completely secluded from its location near the penalty spot to score his eighth goal of the season.

Esbjerg was close to equalize five minutes later, but from an acute angle could attack Mohammed Dauda not udplacere William Eskelinen in the AGF-goal.

A short pass back to Esbjerg-keeper Jeppe Højbjerg had near resulted in yet another AGF-goal, but the keeper was foiled the attempt of the guest's Patrick Mortensen.

It was just before, to Esbjerg scored directly on a corner kick with a quarter of an hour again, but Eskelinen got averted trial, while the pressure against the AGF went to.

After 84 minutes got Esbjerg as finally equalized, as substituted Patrick Egelund scored his first superligamål on a shot from the edge of the field.

It was therefore a pointdeling in Esbjerg, but in injury time appeared Amini looked up with its flat end, and the ball is stroked into the goal, and AGF could rejoice in the 2-1 victory.

1 Magnussen: 'Hard you can't do it finished' 2 See the fun Fischer-interview: 'shut up, I think I... 3 Love Leicester-feeling continues after the big WAS-drama 4 AGF-fan crash down from the tribune: taken to hospital... 5 Forest Olsen a lightning storm in the Bologna victory... 6 B. T. s håndboldkommentator: the Star let the teammates... 7 Illegal use of pepper spray has increased after the... 8 The royal family presents advent calendar 9 Kongehusekspert: Therefore, the framework of royal... 10 Turmoil in the AGF camp after the victory: the Scorer... Magnussen: 'Hard you can't do it finished'