Anthony Joshua has almost raised himself from the dead. Saturday, he won the revanchebraget against Andy Ruiz Jr. and so the four WORLD championship belts bac Anthony Joshua has almost raised himself from the dead.

Saturday, he won the revanchebraget against Andy Ruiz Jr. and so the four WORLD championship belts back, which he lost in June to the mexican american: the WBA, WBO, IBF and IBO.

There was never really any doubt which way the victory would go. In relation to the first fight was this here is much more controlled and tactical. It was just something for Anthony Joshua.

In comparison to the first fight had Joshua lost himself, and he was very mobile throughout the fight, where he got some punches in on Ruiz. At the same time tried Joshua to keep away from Ruiz due britens greater range. A close infight was to Ruiz' favor.

in turn, it could be felt that Ruiz had taken on in relation to the last battle. He was not as fast and dynamic as in June, where he created sensationen and beat Anthony Joshua.

For the seventh and last Anthony Joshua, after a wise bokset battle, calling himself the world champion in the heavyweight for the second time in his career.

The 30-year-old briton, whose career could have been in danger if he lost, got his rematch. And the world view is probably also a third and decisive battle between the two gentlemen, who after the fight came out, they would meet again.

1 Joshua boxer out for revenge in titelbrag in the heavyweight 2 Messi celebrates Ballon d'or award with a record hat-trick... 3 The year boksebrag: Anthony Joshua world champion... 4 The police asked for help - now is Conni found 5 Media: the fraud squad investigating the false invoice... 6 Media: Søik investigating the false invoice to the... 7 Hjemmebanefinale fails to Astralis after close battle 8 North korea claims to have carried out significant... 9 Sandra Toft on the new life: 'It was a little cross-border' 10 Strong Andersen helps Toronto to clear and much-needed... 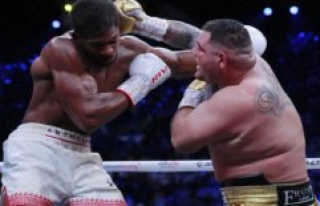 Joshua boxer out for revenge in titelbrag in the heavyweight