17-year-old charged with stabbing other teen at festival

SOUTHINGTON (Conn.) -- Police say a 17-year-old boy faces a felony assault accusation in connection to the stabbing of another teenager during a fight at a Connecticut festival.

SOUTHINGTON (Conn.) -- Police say a 17-year-old boy faces a felony assault accusation in connection to the stabbing of another teenager during a fight at a Connecticut festival.

The stabbing and fight took place at the Apple Harvest Festival in Southington on October 2. Police say that a 16-year old boy was stabbed in the lower left abdomen. He is now recovering from surgery.

The 17-year old was initially taken into police custody on the day of the stabbing. He was charged with misdemeanor breaches of peace and later released. However, police arrested him again and added a charge of first-degree assault after further investigation, authorities stated. The stabbing weapon, a folding blade, was found by police.

Due to juvenile offender laws, the name of the 17-year-old boy was not released. According to police, he was being held in custody pending his appearance at juvenile court. Officials said that both the victim and suspect live in Southington.

Although police have yet to say what the fight was, they said that more arrests were expected. 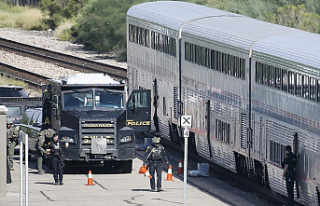 Gunman who killed agent on Amtrak train in Arizona...