Police calls for Greek man - Have you seen Angelika?

North Police calls for a young Greek man who has been away in Aalborg. The case of the 19-year-old Nikolaos Isidoros Theodoridis. He just had to be in Denma North Police calls for a young Greek man who has been away in Aalborg.

The case of the 19-year-old Nikolaos Isidoros Theodoridis.

He just had to be in Denmark in a week's time, but now his family have not heard from him in over 14 days.

He arrived at the north Jutland region 26. november, but when he took the plane home again 2. december, as he had planned, his relatives alarm.

"He contacted his family immediately after, and here, he indicated that he had arrived, but since the family has not heard from him. And therefore we have launched a search for him," says the head of the police investigation, superintendent Kenneth Rodam.

In this context, it asks the police about the citizens ' help to find the young man.

"Therefore, we would very much like to hear from citizens who have seen the young man or have other information about where he may be. His family is very worried about him," says Kenneth Rodam.

Nikolaos is described as 170 centimetres tall, thin, with brown hair and brown eyes. He was, when he left Aalborg Airport, wearing a light jacket, dark shirt with bright print on the chest, black pants and dark shoes. He brought with him also a dark backpack.

the Police encourages all citizens with information in the case of immediately calling The Police on phone number 114.

1 Men charged with antijødisk vandalism to remain jailed 2 LIVE: Ellemann shaken – 'it is tremendously' 3 EU court blocks for the Danish residence requirement... 4 Leaving the DR for 11 years - switches to TV 2 5 Antonsens rackets driller in the bad start at the... 6 Former Team Denmark-director dishes harsh criticism... 7 OVERVIEW: What we know about antiterroraktion in Denmark 8 The police carry out action against the planned terrorist... 9 20 persons arrested in the comprehensive terrorsag 10 Klimaaktivist Greta Thunberg is the Person in 2019 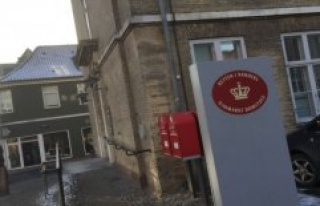